The management of pertussis (whooping cough) including making the diagnosis, suitable investigations, differential diagnoses and prognosis.

Whooping cough (pertussis) is a URTI caused by the Gram-negative bacterium Bordetella pertussis.1,2 It is notifiable in England. Humans are the only host for B pertussis.

Transmission is by respiratory droplets. Up to 90% of household contacts will develop the disease.2 Patients are infectious from about one week after exposure to up to three weeks after they develop a cough.1,2 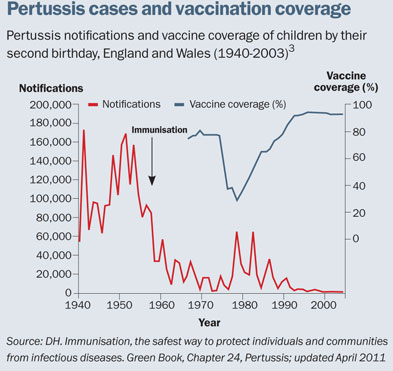 Before the introduction of the pertussis vaccine, up to 170,000 cases occurred in England and Wales per year, with a peak of more than 2,000 deaths notified in 1941.

Whole cell pertussis vaccine was introduced in the 1950s and by 1972, rates of pertussis had fallen to about 2,000 cases per year.2 Public scares regarding a link between pertussis vaccination and brain damage reduced coverage from 80% to 30% between 1977 and 1983, resulting in an increase in notifications and deaths.

Since then, vaccine uptake has increased, the whole cell vaccine was replaced with the acellular vaccine in 2004 and rates of pertussis fell steadily until 2011 and 2012, which saw a significant rise in cases, especially in babies aged less than three months, with 13 deaths in this group (figures up to November 2012).3

Protective antibodies from vaccination only persist for approximately 10 years, therefore adults are at risk of developing the disease even if they are fully vaccinated, and in some situations now are the major reservoir of infection in a community.

The youngest infants, most at risk of pneumonia and death from pertussis, are often unvaccinated or have only received one dose, so a high level of vaccination needs to be maintained in siblings, young adults and relatives, as well as the community, to prevent neonatal cases.

In April 2012 a national outbreak was declared and because of a significant increase in infant deaths the DH announced a temporary immunisation programme for pregnant women at around 20 weeks gestation.

The primary purpose of this maternal programme is to boost passively transferred pertussis antibodies from mother to baby. Maternal vaccine coverage peaked at 62.3% in December 2014. There have been no safety concerns and a >90% effectiveness. In 2016 the programme was extended for a further five years.

The incubation period is from seven to 10 days. In classical whooping cough, the patient often develops a cold and catarrh, progressing to an irritant cough that worsens, becomes chronic and may have the typical whoop, a protracted coughing spasm ending in a sharp drawing of breath.

Whoop is often not present in older children and adults, but the cough may continue for months. In infants, especially those less than three months old, whoop is often absent.

Apnoea is frequently seen in the youngest patients following coughing, or instead of the cough. Mortality is highest in the youngest infants, often following pneumonic consolidation. Other complications include vomiting during coughing, subconjunctival haemorrhages, pneumonia and reduced oxygen saturations that if severe, can lead to hypoxic brain damage, encephalitis, seizure and death.1,2

Investigations
Nasal swab with culture on Bordet-Gengou agar is the preferred isolation method, but can take seven to 10 days. Cotton throat swabs should not be used; they have a reduced likelihood of isolating B pertussis.

The organism is very sensitive and is affected by processing delays. The likelihood of a positive culture decreases with time after symptom onset, from approximately 60% within in the catarrhal phase to 10% or less after four weeks.5

Since 2014, regional PHE laboratories now offer a pertussis PCR service for all ages, both for hospital and primary care settings. PCR is more sensitive than culture as the organisms does not need to be viable, however, PCR is less likely to be positive if symptoms have been present for more than three weeks. Nasopharyngeal swabs are best for PCR testing, but throat swabs may be used, for example in community settings.

Serology/anti-pertussis toxin IgG measurement, at least 14 days after the onset of cough, is a reliable method of confirming cases. It is unreliable in infants and can only be interpreted reliably if no vaccine has been given in the past 12 months. It is only useful where culture and PCR are unlikely to yield positive results. PCR coupled with serology may partly account for the recent increase in numbers of confirmed cases.5

Other infections to consider include sepsis, meningitis or a seizure disorder. In older children or adults with chronic cough,asthma, pneumonia and TB need to be excluded, and in adults, carcinoma.

In most patients, symptomatic treatment is all that is required. There is limited evidence that treating symptomatic patients has any effect on the clinical course of the disease.6

However, treatment does reduce nasal carriage and infectivity. Azithromycin (three to five days) or clarithromycin (seven days) have fewer side-effects and are as effective as longer courses of erythromycin (erythromycin is first choice for pregnant women, if they have macrolide allergy use Septrin; see Evidence Base).7,8

Compared with historical controls, patients who required intensive care ventilation had a better outcome if they had received exchange transfusions to reduce their marked lymphocytosis; however, there are no RCTs of this and therefore the practice is not widespread.

Infants who fail conventional ventilation are sometimes offered extracorporeal membrane oxygenation, but even then the prognosis is poor. 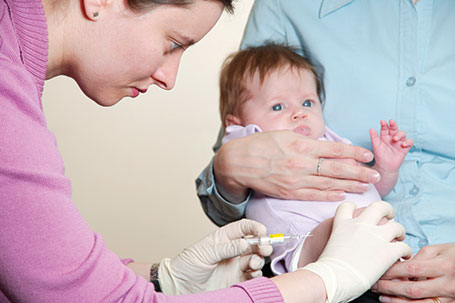 When a case of pertussis is suspected or confirmed, the vaccine history of other children in the family and close contacts up to 10 years of age needs to be taken. If they have not been vaccinated or have an incomplete pertussis history, vaccination should be completed.

Pertussis is generally not a major problem for children with illnesses that predispose to complications with other respiratory viruses (for example, immune deficiency, HIV, congenital cardiac disease). They should be managed as any other child who might contract pertussis and treated if they develop symptoms.

Chemoprophylaxis has limited benefit,7 so should only be given when symptoms in the index case occurred less than 21 days before and the contact is in either of these groups:5

Immunisation is offered to all children under 10 years old (three to four doses), DTaP/IPV/Hib vaccine (pre-school).3Vaccination is generally not recommended for those older than 10 years, even if unvaccinated, unless pregnant. More detail is available from the DH Green Book, chapter 24 and in Guidelines for the Public Health Management of Pertussis in England.3,8

Older children and adults often have mild or atypical illness, but up to 50% will cough for 10 weeks or more.

Pneumonia is common, occurring in up to 20% of infants (13% of adults) but bronchiectasis is rare. Seizures (1-2% of infants; 0.3-0.6% of adults) or encephalitis are more common in infants.

Those with underlying diseases are at higher risk of complications. Pertussis mortality is rare but 83% of deaths occur in infants and in 1.6% of hospitalised infants.

The infant first presented with a cough, which was diagnosed as bronchiolitis. On day two of admission, the infant was noted to whoop and the clinical diagnosis of pertussis was made. The patient deteriorated but avoided intubation.

The stay in hospital was for more than two weeks and the cough persisted for more than three months and was associated with marked failure to thrive, which slowly resolved. By five months of age, the infant had returned to normal, with a normal chest X-ray.

We elected to start erythromycin, despite the lack of evidence that it has any effect on outcome. This was because mortality is highest in those aged under three months, especially those aged under six weeks, and at that stage, we were unsure whether this child would significantly worsen. Reducing infectivity was a bonus.

Vaccinating contacts
This child had two siblings aged two and four years and the mother's partner worked in a nursery with infants and children. In such a case, the vaccination history of the siblings needs to be confirmed.

The mother's partner needs to be offered chemoprophylaxis to prevent transmission to infants who will not be fully vaccinated.

However, if all infants in their care have received three doses of DTaP/IPV/Hib, prophylaxis will not be warranted.

This case should be notified.

There have been several Cochrane Database meta-analyses on pertussis.

This is an updated version of an article that was first published in Februay 2013.