Section 1 Epidemiology and aetiology
Epidemiology
The clinical significance of osteoporosis lies in the fractures that arise. In the UK, osteoporosis results in more than 200,000 fractures each year, causing severe pain and disability to individuals at an annual cost to the NHS of over £1.73 billion.

More than one-third of adult women and one in five men will sustain one or more osteoporotic fractures in their lifetime. Common sites of fracture include the vertebral bodies, distal radius, proximal femur and the proximal humerus.

Hip fractures alone account for more than 20 per cent of orthopaedic bed occupancy in the UK, and the majority of the direct health service cost of osteoporosis.

Approximately 50 per cent of patients suffering a hip fracture can no longer live independently and 20 per cent die within 12 months of the fracture.

Fractures in patients aged over 60 years account for more than two million hospital bed days in England each year. This exceeds the bed occupancy attributable to diabetes, IHD, heart failure or COPD. The ageing of the UK population will double the number of osteoporotic fractures over the next 50 years if changes are not made in present practice.

Already, the admission rate for hip fractures has increased in England by 2.1 per cent per year since 1999, while hospital bed days have increased by 5.9 per cent a year.

Aetiology
The most common cause of osteoporosis arises from estrogen deficiency that begins some years before the time of menopause. The skeleton comprises approximately 20 per cent trabecular bone and 80 per cent cortical bone and undergoes a continual process of resorption and formation, governed by the activity of bone cells in bone remodelling units.

Approximately 10 per cent of the adult skeleton is remodelled every year.

The architectural changes weaken bone disproportionately compared with the loss of skeletal mass.

The rate of loss of bone tissue is particularly rapid around the time of menopause giving rise to postmenopausal osteoporosis, but bone loss continues throughout later life in men as well as women.

Many other disorders can give rise to osteoporosis (see box) by accelerating bone loss.

Section 2 Diagnosis
Clinical features
The clinical features of osteoporosis are a consequence of the fractures that arise. Non-vertebral fractures are easily detected by the associated acute pain and deformity, both of which resolve well with appropriate management.

In contrast, vertebral fractures are often undiagnosed due to a relative lack of symptoms (detected on X-ray only) or the attribution of back pain to other causes.

Multiple vertebral fractures commonly cause symptoms and may give rise to a thoracic kyphosis (unkindly termed dowager's hump) and long-term morbidity.

BMD at the femoral neck provides the reference site. It is defined as a value for BMD 2.5 standard deviations (SD) or more below the young female adult mean (T-score ≤ -2.5 SD).

There are a number of other indications for bone densitometry including monitoring of treatment, determining the extent of bone loss and assessment of suitability for certain treatments.

Investigations
The aims of the clinical history, physical examination and clinical tests are to: exclude diseases that mimic osteoporosis (e.g. osteomalacia, myeloma); identify secondary causes of osteoporosis and contributory factors; assess the risk of subsequent fractures and select the most appropriate form of treatment.

Relevant tests are shown in the box.

Acute fracture
The management of acute fracture is not different from that of a non-osteoporotic fracture. It is important to restore mobility as soon as possible since immobilisation is an important cause of bone loss.

Smoking and high intakes of alcohol are recognised risk factors for fractures and are to be avoided.

Many fractures occur after a fall and strategies to avoid falls should be considered.

Assessing fracture risk
The longer term management of osteoporosis requires the assessment of future fracture risk which, in turn, determines the need for intervention.

At present there is no accepted policy for population screening in the UK to identify individuals with osteoporosis or those at high risk of fracture.

Rather, patients are identified opportunistically using a case-finding strategy on the finding of a previous fragility fracture or the presence of significant clinical risk factors (CRFs).

Algorithms that integrate the weight of CRFs for fracture risk have been developed by the WHO. The FRAX tool (www.shef.ac.uk/FRAX) computes the 10-year probability of hip fracture or major osteoporotic fracture.

The approach adopts the previous guidance in that treatment should be considered when an individual's probability of fracture is comparable to or exceeds that of a woman of the same age who has already sustained a low trauma fracture.

The guideline suggests that fracture probability should be assessed with FRAX in postmenopausal women and in men aged 50 years or more with CRFs where assessment would influence management.

Women with a prior fragility fracture can be considered for treatment without the need for further risk assessment, although BMD measurement may sometimes be appropriate, particularly in younger postmenopausal women.

In the presence of other CRFs, the 10-year probability of a major osteoporotic fracture (clinical spine, hip, forearm or humerus) should be determined using FRAX.

Section 4 Pharmacological interventions
Bisphosphonates, strontium ranelate, raloxifene and parathyroid hormone peptides have been shown to reduce the risk of vertebral fracture when given with calcium and vitamin D. 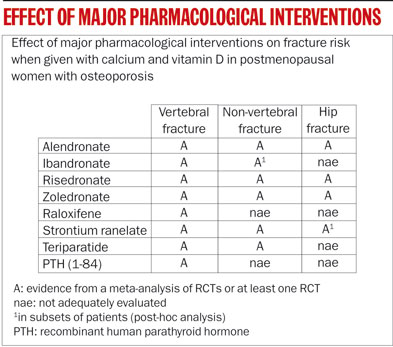 Some have been shown to also reduce the risk of non-vertebral fractures, in some cases specifically at the hip (see box).

Alendronate is the first-line treatment in the majority of patients.

In patients who are intolerant of alendronate or in whom it is contraindicated, other bisphosphonates, strontium ranelate or raloxifene may provide appropriate treatment options.

The high cost of parathyroid hormone peptides restricts their use to those at very high risk, particularly for vertebral fractures.

Other approved treatments for postmenopausal women include calcitonin, calcitriol, etidronate and HRT.

In the near future, therapies will include other SERMs and a novel monoclonal antibody therapy, denosumab, which inhibits osteoclast activity.

For an archive of all GP clinical reviews visit www.healthcarerepublic.com/clinical/GP