Multiple myeloma is a cancer of plasma cells, a type of white blood cell normally responsible for producing antibodies

Myeloma is a rare, genetically heterogeneous, haematological malignancy of plasma cells, accounting for approximately 50 cases per million per year in the UK.1

The median age at presentation is 70 years, although a small number of patients may present before 50 years of age.

A defining feature in most cases is the presence of an abnormal monoclonal immunoglobulin (paraprotein or M-protein). About 20% of cases have only light chains (Bence Jones myeloma) and about 5% have no detectable paraprotein (non-secretory myeloma). Myeloma is almost always preceded by monoclonal gammopathy of undetermined significance (MGUS).2

In unselected populations, the incidence of MGUS is about 1%, increasing with age to about 3% of those aged over 70. Progression from MGUS to myeloma or a related condition occurs at about 1% per year.

The only unequivocal risk factors for myeloma are male sex, older age and black ethnicity.3 The ethnic variation suggests a genetic underpinning to myeloma risk.

Myeloma/MGUS incidence is also two to three times higher in first-degree relatives of patients with myeloma/MGUS.4 Susceptibility genes have been identified, but the low associated risk does not justify population or familial screening.5,6 Immunosuppression is associated with a threefold increase in myeloma incidence. Tobacco, alcohol and chemical exposure do not appear to be risk factors for myeloma. There is weak evidence that ionising radiation may be myelomagenic.

The key classification is for MGUS, asymptomatic (smouldering) and symptomatic myeloma (see table 1).

Myeloma often presents insidiously with symptoms such as fatigue, bone pain and recurrent infections. Clinical features include symptoms of:

Patients with suspected myeloma require urgent referral. Spinal cord compression, hypercalcaemia and renal failure are medical emergencies.7 Guidelines have been published for investigation of asymptomatic patients with a paraprotein.2

Back pain is very common, but the red flags approach can be used to identify patients who require further investigation (see box 1).8,9

To screen patients with possible myeloma, the following are required:7

ESR is typically markedly raised (often >100mm/h), but may be normal in non-secretory or light chain only patients.

Renal function: May be normal; urea and creatinine may indicate renal damage, requiring immediate withdrawal of nephrotoxic drugs, referral for admission/rehydration and treatment of associated hypercalcaemia.

Calcium and albumin: Hypercalcaemia is found in 30% of patients at diagnosis.

Imaging of symptomatic areas: Plain X-ray or MRI (not bone scintigraphy). A negative X-ray alone does not exclude myeloma. Scintigraphy is not useful because osteoblast activity is suppressed in myeloma. Triage using the back pain red flags may assist in selecting patients for cross-sectional imaging such as CT or MRI.

Diagnosis: Patients with myeloma have the longest interval from first presented symptom to diagnosis;10,11 37% are emergency presentations, with poorer one-year survival.12

Symptomatic myeloma is defined by the presence of CRAB features (see table 1).

GPs can aid early diagnosis by: 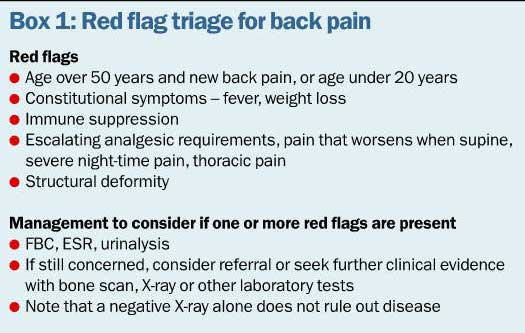 The British Committee for Standards in Haematology has published guidelines on the management of myeloma7 (box 2) and supportive care for patients with the condition.13 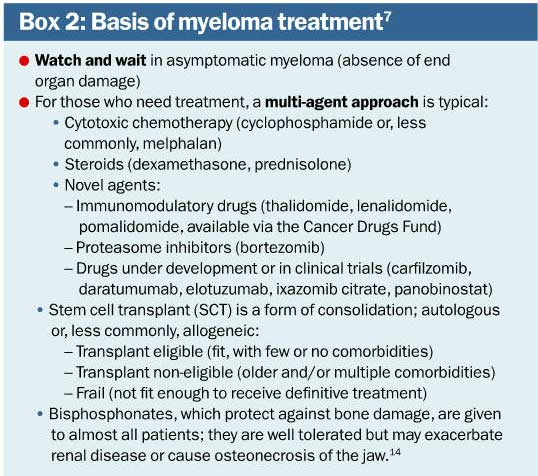 Patients who are willing should be enrolled in a clinical trial if one is available. Myeloma UK (www.myeloma.org.uk/) has information about current trials.

Regardless of treatment offered, myeloma typically follows a relapsing, remitting course with a final refractory phase; the whole process can span 10 to 20 years and beyond.

Treatment of relapse depends on a number of factors, including age and fitness for SCT, duration of first remission and previous treatments.

If the first remission lasted a year or more, retreatment with the same or a similar regimen is likely to be effective.1

If relapse occurs in less than a year, or for a second or subsequent time, further agents may be added.

In this case, options include:

Myeloma is treatable but is not considered curable, although some patients achieve long remission.

Median survival is now in the order of five years, with many patients surviving longer than 10 years.

If a patient develops new symptoms or exacerbation of existing ones, they should be reviewed for progression, relapse or complications. Prompt intervention is vital.

A 47-year-old previously fit woman developed back and rib pain. There was no history of trauma, despite her hobby of horse riding.

She attended the GP practice on four occasions and was seen by different doctors each time. Various combinations of analgesia were prescribed, to no avail.

On the third visit, her chest X-ray was reported as normal. Owing to the persistent pain, she was referred to orthopaedics three months later and an outpatient MRI was requested.

The patient called her GP two weeks later complaining of 'wobbly legs' and was advised to await the MRI scan. She presented to A&E a month later with loss of power in the legs and loss of sensation.

An urgent MRI scan showed an infiltrative lesion involving T3 and T4 with soft tissue extension into the spinal canal, with cord compression at that level.

Blood tests showed marked anaemia with Hb 70g/L, abnormal renal function (creatinine 110 micromol/L) and hypercalcaemia (corrected calcium 2.7mmol/L). Her total IgA was elevated. She was referred urgently to a haematologist; her bone marrow biopsy showed sheets of plasma cells, confirming a diagnosis of myeloma, and she was admitted for steroids, IV fluids and a bisphosphonate infusion.

She underwent T3/4 decompression and laminectomy followed by radiotherapy and chemotherapy.

The patient achieved remission but remained on the rehabilitation unit for more than six months. Owing to her paraplegic state, her performance status was not good enough for SCT.

In the ensuing months, she regained sufficient power in her legs to be mobile with sticks and return to work, but she has never been able to return to horse riding.

A number of red flag features were present in this case, that could have led to a prompt diagnosis if blood tests were performed earlier.

A previously fit and active person under 50, who rarely visits the surgery, begins to make repeated attendances with escalating upper thoracic back pain.

The previous wellbeing and age of the patient are red flags, as is the location of the back pain.

Although the X-ray was reported as normal, the persistence and worsening of the pain is a trigger for cross-sectional imaging and referral. However, her call about having wobbly legs was not acted on, and the subsequent cord compression was not prevented.