Section 1: Epidemiology and aetiology
Gout is an inflammatory arthritic condition that occurs when urate crystals accumulate in joints and other tissues.

It is the most common form of inflammatory arthritis in men with an overall prevalence in UK general practices of 1.4%. Both the incidence and prevalence increase with age.

Population studies from both the Mayo Clinic3 and from Taiwan4 have shown significant increases in the prevalence of gout compared with 20 years ago. This may be partly explained by increased life span, obesity and use of diuretics.

Pathogenesis
Hyperuricaemia develops either due to over production or under excretion of uric acid. Asymptomatic hyperuricaemia is common and can persist for many years before gout occurs. In patients at risk of developing gout, an acute attack may be precipitated by acute illness, excessive eating, heavy alcohol intake, dehydration, rapid weight loss or recent surgery.

The majority of patients go on to have recurrent flares; 62% within one year and 89% within five years. When untreated, advanced gout develops causing damage and deformity at multiple joints, the development of large tophi and in some cases renal stone formation. Advanced polyarticular tophaceous gout can mimic severe rheumatoid arthritis. 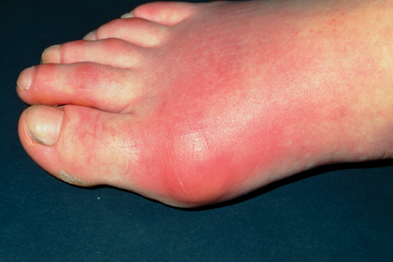 Comorbidities
A variety of comorbidities such as cardiovascular disease, hypertension, obesity, type-2 diabetes mellitus and dyslipidaemia are associated with gout. There is increasing evidence that the hyperuricaemia that underlies gout is an independent risk factor for comorbid conditions and may have a causal role in their development.

The reverse is also true - the comorbid conditions may play a causal role in the development of gout. For example, individuals with hypertension show impaired renal tubular secretion of urate, suggesting a mechanism for hyperuricaemia and hence gout.

Furthermore, loop and thiazide diuretics, commonly used in hypertensive patients, may cause hyperuricaemia and the development of gout.

Section 2: Making the diagnosis
The diagnosis of acute gout can be made by taking a clinical history. The following are suggestive of gout:

The importance of these clinical features in making a diagnosis of acute gout has been formalised in the Nijmegen score7 (see table below).

The Nijmegen score is particularly useful in a general practice setting when joint fluid microscopy is not readily available. A score of eight or more carries an 80% probability that the diagnosis is acute gout. This score is possible when typical clinical features are present, even when the sUA level is normal or not available.

Laboratory diagnosis
The sUA is often normal during acute gout attacks. The best time to measure sUA is two weeks after an acute attack has occurred. When possible joint fluid should be aspirated from the affected joint and sent for polarised light microscopy. This is particularly important when first making a gout diagnosis when fluid can also be sent for bacterial culture.

X-ray
X-rays are usually normal early in the course of gout but erosions develop when there have been frequent recurrent attacks.

Section 3: Managing the condition
Affected joints should be rested and a NSAID, such as naproxen or etoricoxib, prescribed until symptoms resolve. Colchicine 500 microgram two to four times a day is an alternative. Allopurinol should not be started during an acute attack but can be continued in patients already established on it. Opiate analgesics can be used in addition to NSAIDs or colchicine.

Oral, intra-articular, IM or IV corticosteroids can be used instead of NSAIDs or in addition to colchicine in those refractory to treatment. Oral prednisolone 10-30mg/day for up to two weeks or IM methylprednisolone 120mg may be used

Thiazide or loop diuretic drugs should be stopped if they are being used to treat hypertension, but continued in patients with cardiac failure. The antihypertensive losartan has a modest uricosuric effect, but other ARBs do not.

Preventing further attacks
The therapeutic goal of urate-lowering therapy (ULT) is to achieve a sUA level <0.3mmol/l. ULT is indicated following two or more acute gout attacks, chronic gouty arthritis, tophi or radiographic changes of gout and should be started one to two weeks after the signs of inflammation have subsided.

Allopurinol 100mg daily should be started and sUA checked after four weeks. Allopurinol can be increased until sUA is less than 0.3 mmol l or a maximum dose of 900mg is reached if allopurinol toxicity occurs sulfinpyrazone 200-800mg day the non-purine xantine oxidase inhibitor febuxostat 80-120mg can be used.

Prophylaxis of acute attacks - which occur more frequently in the first six to 12 months of ULT - can be achieved using colchicine 0.5-1mg/day or a NSAID. Aspirin 75-150 mg/day may be continued.

Comorbidities, such as hypertension, hyperlipidaemia and hyper-glycaemia, should also be managed.

In overweight patients, dietary modification to achieve ideal body weight should be attempted. Skimmed milk, low fat yoghurt, soy beans, cherries and vegetable sources of protein should be encouraged. Liver, kidneys, shellfish and yeast extracts should be avoided. Intake of high purine foods and protein intake should be restricted. Vitamin C intake up to 1500mg/day is recommended.

Beer, stout, port and fortified wines should be avoided. Alcohol consumption should be restricted and patients should have at least three alcohol-free days each week.

Patients with gout and urolithiasis should drink more than two litres of water a day. In recurrent stone formers, alkalinisation of the urine with potassium citrate (6.5mg/day) should be considered.

Moderate physical exercise should be encouraged but intense exercise and trauma to joints avoided.

Renal impairment
If eGFR <30ml/min/1.73m2 the maximum total dose of colchicine is 3mg, and if 30-59ml/min/1.73 m2 the dosage is 6mg. During gout prophalaxis the duration of colchicine should be limited to six months maximum and NSAIDs avoided.

In patients with chronic kidney disease allopurinol 100mg taken on alternate days may be sufficient to achieve a sUA level <0.3mmol/l.

Benzbromarone is an unlicensed uricosuric agent that can be used as an alternative to allopurinol in patients with renal impairment.

Section 4: Follow-up
Gout is a preventable, treatable and curable condition. If the sUA is maintained below 0.3mmol/l, few if any gout attacks are reported after 36 months. Large tophi may not completely disappear despite the maintenance of normo- uricaemia.

When untreated, gout attacks become more frequent and prolonged and the asymptomatic periods between acute attacks shorten. After an average of 10 years, permanent joint damage occurs, there may be multiple tophi and the patient has developed advanced polyarticular gout with chronic pain.

Section 5: Case study
A 45-year-old male complains of the onset of a painful foot over the past three to four hours. This is the first time this has happened and is the worst pain he has ever experienced.

There is no history of fever, rigors, cough, dysuria or rash. He has a history of hypertension and drinks more than 25 units of alcohol a week. There is no family history of gout.

Investigations denied
He is overweight and has a red hot swollen first metatarsolphalangeal joint that is very tender to light touch and very painful on movement. The patient declines joint aspiration and does not want to go to hospital for blood tests (FBC, CRP, uric acid, blood and urine cultures). He has a Nijmegen score of 7.5.

He has no history of renal impairment or MI. He is treated with naproxen 500mg twice daily for two weeks and advised to avoid alcohol and increase his fluid intake. He is asked to attend the surgery the next day for a review but he does not come.

The patient is next seen at an afternoon surgery a year later. He has had two further episodes of foot pain. On this occasion he is concerned about headache, and is worried that he has a brain tumour. His alcohol intake is 40 units a week and he takes aspirin 75mg, bendroflumethiazide 2.5mg and ibuprofen. His BMI is 36kg/m2 and BP 162/98mmHg. He has a lump on his elbow.

A blood test shows sUA is 0.52mmol/l and he is started on allopurinol 100mg daily. Bendroflumethiazide is stopped and losartan commenced instead for BP control. Aspirin 75mg is continued. He is given lifestyle advice about weight loss, reducing alcohol intake and increasing vitamin C intake.

The following week he develops a typical gout attack. He informs the duty GP that he started allopurinol one week ago.

Diagnosis
A diagnosis of gout is made and the patient commenced on naproxen 500mg twice daily for two weeks and allopurinol is continued. Colchicine prophalaxis dose (0.5mg twice daily) is then commenced and continued for 12 months.

He is given written educational advice about his lifestyle and a follow-up appointment with the practice nurse. sUA is re-checked every four weeks and allopurinol increased by 100mg until a target sUA of 0.3mmol/L is reached.

After 36 months he is taking allopurinol 600mg/day, the tophus on his elbow has disappeared and he has not had a gout attack for 14 months.

This is an up-to-date review of the literature on gout.

The European League Against Rheumatism (EULAR) recommendations on gout management cover non-pharmacological and pharmacological management and emphasise the need to treat associated comorbid conditions and risk factors. The guideline recommends an sUA of <0.36mmol/l.

A detailed review of the various types of crystal-induced arthritis, targeted at a professional audience.

This is a useful site both for health professionals and patients. It also features a short video about gout.

This is a useful site for patients.