Latest guidance on diagnosis and management of malaria, advice to give to travellers on prevention and how to approach investigation of people with suspected malaria.

It is estimated that at least half of the world's population is at risk of malaria. According to the latest WHO estimates for 2015, there were 214m cases of malaria and 438,000 deaths. The greatest burden of disease is for those living in sub-Saharan Africa. The African region of the WHO accounts for 89% of malaria cases and 90% of malaria deaths worldwide.

However, between 2000 and 2015, the incidence of malaria fell by 37% globally and that of clinical disease in endemic Africa by 40%. During the same period, malaria death rates decreased by 60%.

Insecticide-treated nets, the most widespread intervention in prevention programmes that also included indoor residual insecticide spraying in affected communities, were by far the largest contributor to this achievement.

An increase in travel to endemic areas is placing people at increased risk of contact with infected mosquitoes. Those who are particularly vulnerable to complications from malaria infection include children, pregnant women, the elderly and those with comorbidities, such as renal failure.

The protozoan organisms responsible for causing malaria infection in humans are spread by a bite from infected female Anopheles mosquitoes. Five distinct types cause malaria in humans: Plasmodium falciparum, P vivax, P ovale, P malariae and P knowlesi. The mosquito carries the parasite in its saliva and injects it into the bloodstream of the human host. The parasite first travels to the liver and after some delay, spreads throughout the body inside red blood cells. The infected red cells can be seen with pigmented deposits on a microscope slide of a film of blood after staining and this finding remains the mainstay of diagnosis in resource-poor and more developed healthcare settings.

The most virulent and life-threatening form of malaria is P falciparum, which is the most prevalent form found in sub-Saharan Africa and South-East Asia. On the Indian subcontinent, P vivax is more common.

Malaria is a treatable condition provided the diagnosis is made early and treatment started promptly. Symptoms from malaria develop at least six days after entering a malarial area. Delays in diagnosis and treatment can have deadly consequences.

The clinical features of a patient presenting with malaria are typically non-specific. Doctors need to have a high index of suspicion for any patient who has travelled to an affected area in the previous six to 12 months and to arrange the appropriate tests to confirm the diagnosis.

Non-specific symptoms can include fever, sweats, chills, general malaise, myalgia, weight loss, headache, diarrhoea and cough. Unfortunately, these are typical symptoms of other common conditions, such as flu-like illness or dengue fever.

The gold standard of investigation is to send an urgent ethylenediaminetetraacetic acid (EDTA) blood sample to the laboratory for thick and thin microscopy.

Many laboratories also undertake antigen-detecting rapid diagnostic tests. The results should be available within two hours of arrival at the laboratory and it is advisable to leave a contact telephone number on the request form so the ordering doctor can be informed of the result.

A negative result does not necessarily exclude the possibility of infection and if there is a high index of suspicion, the test should be repeated at intervals. Ideally, the blood should be extracted at the peak of a high temperature in the patient.

Other tests may be clinically indicated, including FBC, U&Es, LFTs and random blood sugar. If the patient is showing signs of serious illness, they should be referred to secondary care while the results of the blood screen are awaited. The diagnosis cannot be excluded until three blood samples over 48-72 hours have been examined.

If a positive diagnosis is made or there remains a strong suspicion of infection despite a negative test, discuss the case with an on-call secondary care colleague. Many larger hospitals have an infectious disease service that can provide advice.

The Imported fever service helpline is available to health professionals (typically hospital doctors), for expert clinical and microbiological advice to support management of returned travellers who are febrile.

The mainstay of management of malaria is educating patients on the reduction and prevention of mosquito bites.

This involves using a number of prevention measures – appropriate antimosquito body sprays, bed nets where rooms are not screened or there is no air conditioning, and wearing long-sleeved clothing (sometimes treated with insecticides), especially from dusk to dawn, when the mosquitoes that transmit malaria are biting most readily.

The range of chemoprophylactic tablets used depends on the individual traveller and the country visited; details and indications can be reviewed on various websites, such as TravelHealthPro or Travax.

Drugs used in malaria prevention do not stop parasites entering the body, but kill them once there, in the liver or red blood cells. All of the agents have to be taken before and during the time in a malarial area and continued for varying times (depending on the tablets used) after leaving the area, to ensure parasites in the liver have been eradicated.

Depending on the species of parasite and the patient's clinical condition, the specialist is likely to recommend admission. Current treatments include artemesinin derivatives or quinine-based compounds. Chloroquine is still used for acute treatment of non-falciparum malarias, but is rarely used for prevention because of resistance of the falciparum parasite in many areas.

On occasion, patients may enquire about using emergency standby treatments,1 especially if they are travelling to an area without access to healthcare facilities – this may be considered, but requires counselling on when to use and should not be viewed as a replacement for chemoprophylaxis. 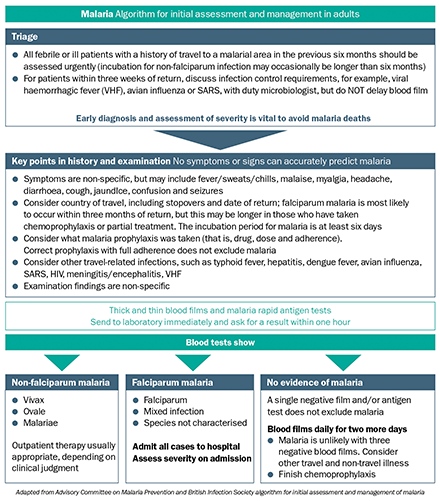 Over recent decades, researchers have looked at developing vaccines against malaria or genetically modifying mosquitoes to change the balance in favour of those which might be resistant to carrying the parasite. The parasite is protected from attack by the body’s immune system because for most of its human life cycle, it resides in the liver and red blood cells, and is relatively invisible to immune surveillance.

The RTS, S/AS01 malaria vaccine has been evaluated in a large clinical trial in seven countries in Africa2 and received a positive opinion from the European Medicines Agency in July 2015. In October 2015, the WHO recommended further studies over the next three years to assess the potential widescale use of this vaccine for those living in endemic countries.

Once symptoms develop, and provided the diagnosis is made early and appropriate treatment commenced promptly, most patients with falciparum malaria should recover fully.

Non-falciparum malaria is rarely life-threatening, although deaths have been reported with P knowlesi infection in those who did not have underlying health problems.

Complicated or severe malaria is a medical emergency, requiring intensive care management by an infectious disease or tropical disease specialist.

Long-term complications following successful treatment of falciparum malaria are rare. However, there are rare reports of self-limiting residual neurological deficits, including psychosis and cerebellar dysfunction. Splenic rupture and acute lung injury have been reported with vivax malaria infections.

A 64-year-old woman with AF taking digoxin and warfarin returned from a seven-day trip to Ghana 10 days ago. She had taken doxycycline as her antimalarial prevention following adjustment of her warfarin dose before her trip, owing to the recognised drug interaction of warfarin and doxycycline.

She presented to her GP complaining of watery diarrhoea and feeling as though she had flu since her return. The GP examined her and noted that she was apyrexial.

Her diarrhoea settled, but she developed fevers and chills over the next six days and started vomiting. She attended the out-of-hours service, where she was noted to have a temperature of 38.5oC, to be dehydrated and to look unwell.

She was admitted and diagnosed with a 2% P falciparum parasitaemia. This indicates that 2% of the red blood cells are considered to be parasitised. This is a feature of severe malaria and should be managed in hospital using IV artesunate. Specialist advice must be sought.

With appropriate management, the patient improved, was able to eat and drink after two days and completed treatment with oral quinine and doxycycline.

In this case, the appropriate antimalarials for this destination had been given, but the patient had forgotten to take the doxycycline regularly and had not wanted to admit this to her GP.

Appropriate pre-travel advice is essential and should always include good mosquito bite prevention advice. Adjustment of the warfarin dose had been completed before her departure, but non-compliance and a diagnosis of malaria in a returning traveller were not considered.

Management with azithromycin is occasionally considered for disabling non-bloody diarrhoea. Treatment should usually be guided by stool culture, ova and parasite examination; Giardia and Cryptosporidium antigen detection (when appropriate) would be best practice.