Hyperthyroidism is a common endocrine disorder in which the thyroid gland produces too much thyroid hormone.

1.5 CPD Credits For 2.5 hours of learning activity and reflection based on this article

Hyperthyroidism is a disorder of excess synthesis and secretion of thyroid hormones, resulting in typical clinical manifestations of thyrotoxicosis.1

The population prevalence of hyperthyroidism is 2% in women and 0.2% in men in the UK,2 with higher incidence in white populations, areas of iodine deficiency and older people.3

Hyperthyroidism is usually primarily a disorder of the thyroid gland, but in rare cases, it may be secondary to increased secretion of pituitary TSH or hypothalamic TSH releasing hormone (TSHR).

The most common cause of overt hyperthyroidism, accounting for 80% of cases in the UK, is Graves' disease, an autoimmune condition in which auto-antibodies bind to the TSH receptors on thyroid follicular cells, resulting in increased secretion of thyroxine (T4) and triiodothyronine (T3).

Other causes include toxic nodular hyperthyroidism (15% of cases in the UK, with 50% of cases in iodine-deficient areas)6 when one (toxic adenoma) or more nodules (toxic multinodular goitre) cause autonomous overproduction of thyroid hormones.

Thyroiditis or inflammation of the thyroid represents a condition of thyroid cell destruction, resulting in the release of excess thyroid hormones in the circulation, thereby causing thyrotoxicosis.

Subclinical hyperthyroidism is a biochemical diagnosis, in which serum TSH concentrations are low or undetectable, with normal concentrations of circulating thyroid hormones. This may be endogenous or exogenous (due to excessive doses of levothyroxine replacement). 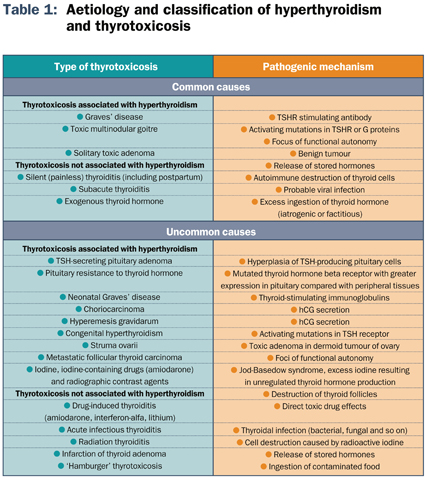 Development of AF is one of the most serious consequences of hyperthyroidism and is an independent predictor of mortality.7

SOB and reduced exercise capacity are caused by a combination of cardiovascular abnormalities and respiratory muscle weakness.8

Clinical signs include the presence of a smooth goitre in Graves' disease and a single nodule or multinodular goitre in toxic nodular disease. A fine tremor, sinus tachycardia, warm moist skin and hyperreflexia are also common signs of hyperthyroidism.

About 50% of patients with Graves' disease have ophthalmopathy, characterised by eyelid retraction and lag, proptosis, conjunctival injection and periorbital oedema; in severe cases, this may result in ophthalmoplegia.

It is estimated that about 5% of patients with Graves' disease develop severe ophthalmopathy.9 Other extrathyroidal manifestations of Graves' disease include pretibial myxoedema and thyroid acropachy.

Overall, the frequency and severity of symptoms are related to the degree of circulating thyroid hormone abnormality.

Older patients have fewer symptoms and signs, with the exception of weight loss, SOB and AF.10

Investigations
Measurement of serum TSH is the most sensitive screening test to exclude thyrotoxicosis. This is usually undetectable in overt hyperthyroidism because of negative feedback of high levels of circulating thyroid hormones on the anterior pituitary.

Free T4 is usually raised in patients with overt hyperthyroidism, except in more rare cases of T3 toxicosis.

Anti-thyroid peroxidase (TPO) antibodies are also present in 75% of patients with this condition.

Isotope imaging (with technetium or radioactive iodine) may help to distinguish Graves' disease from other causes of thyrotoxicosis.

The investigations required to establish a differential diagnosis of thyrotoxicosis are listed in table 2. 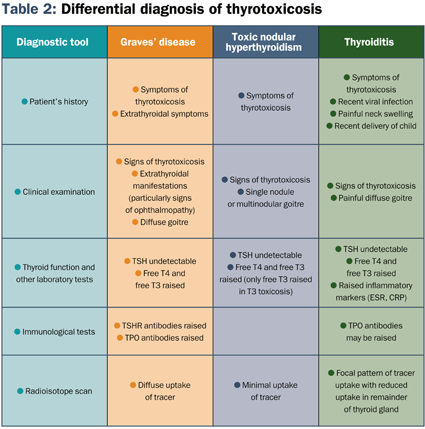 Treatment with beta-adenoceptor blockers is effective in controlling symptoms of tremor, palpitation and anxiety.

Once a diagnosis of hyperthyroidism has been confirmed, there is a choice of three treatment options: antithyroid drugs, radioiodine administration or surgery.

Table 3 summarises the indications, advantages and disadvantages of therapeutic strategies for
hyperthyroidism. 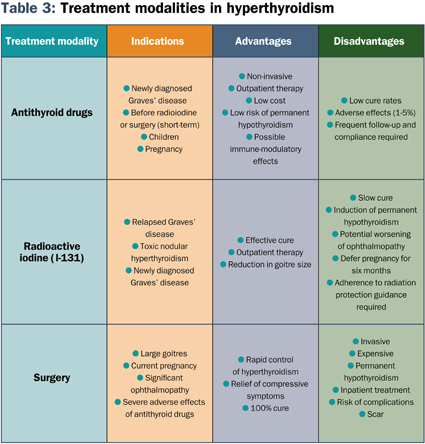 The American Thyroid Association guidelines on hyperthyroidism recommend discussion of all three options with the patient.12

Antithyroid drugs
Thioamides, carbimazole and propylthiouracil (mainly in early pregnancy) are the drugs of choice.

If a dose titration regimen is used, the dose of antithyroid drugs is reduced as serum free T4 concentrations normalise, aiming for completion of 12-18 months of therapy.

Some clinicians prefer a block- replace regimen, in which high doses of antithyroid drugs are used to block thyroid function in combination with levothyroxine replacement. This approach does not improve remission rates and is associated with more side-effects.13

Minor and often transient side-effects occur in about 3% of patients on antithyroid drugs. These include rashes, arthralgia, fever and GI upset.14 The most severe side-effect of carbimazole and propylthiouracil is agranulocytosis, which occurs in 0.2-0.5% of patients taking these drugs. Propylthiouracil is associated with antineutrophil cytoplasmic antibody-positive vasculitis15 and acute liver failure.16

This is a safe and effective treatment option, with cure rates of up to 85% after a single dose.17

The aim of treatment is to restore a euthyroid state with or without hypothyroidism. Contraindications include pregnancy or lactation, desire for pregnancy within six months of treatment and inability to comply with radiation protection regulations.18

Most clinicians use a single fixed dose and the use of calculated doses has not proved cost-effective.19

Graves' ophthalmopathy is a relative contraindication and many clinicians will administer radioactive iodine in patients with inactive thyroid eye disease, under steroid prophylaxis.20

Surgery
Surgery is used infrequently to treat hyperthyroidism. Total thyroidectomy is advised and complication rates are low in the hands of experienced surgeons.

New developments
Efforts to better understand the genetic basis of autoimmune disease should ultimately provide novel approaches to treat the underlying disease process, rather than inhibition or destruction of the thyroid.

Promising developments include the use of rituximab, a CD20 antibody,21 and selective TSH-receptor antagonists22 in preclinical trials.

The other modalities result in permanent hypothyroidism, usually requiring levothyroxine. Treatment of toxic nodular hyperthyroidism is preferentially with radioiodine, or surgery if the goitre is large. Annual TFTs are required in patients who have radioiodine, regardless of the induction of hypothyroidism.

A long-term increase in all cause and vascular mortality after treatment of hyperthyroidism has been described. Induction of hypothyroidism after radioiodine treatment reduced the risk, possibly because hypothyroidism is the best marker of reversal of adverse tissue effects.24,25

A 34-year-old woman presented with symptoms of heat intolerance and irritability.

She admitted to losing 5kg in the past three months, despite eating more than usual. She had no diarrhoea or palpitations. Her mother had an underactive thyroid.

The patient was married, with two children aged 12 and 10. She worked as a primary school teacher.

The GP considered hyperthyroidism and this was confirmed by TFTs. The patient was referred to the thyroid clinic.

A clinical diagnosis of Graves' hyperthyroidism was made and measurement of auto-antibodies was arranged.

Treatment options - antithyroid drugs, surgery or radioiodine - were discussed. In view of the age of her children, the radiation protection requirements for radioiodine would be difficult (she would need to have minimum contact with her children for nearly four weeks).

The patient chose carbimazole and was warned in writing about the risk of agranulocytosis.

She was treated using a titration regimen and completed 15 months of treatment.

She returned eight months later with relapsed Graves' disease and because her youngest child was still only 13 years old, she opted for a further course of carbimazole.

The carbimazole was discontinued and arrangements were made for her to receive radioiodine.

The patient's children went to stay with their grandparents for two weeks and because she received the treatment during the summer holidays, she was able to avoid school for four weeks without needing to miss any of the term time.

She was made aware of the nearly 80-90% chance of hypothyroidism developing after radioiodine.

Hypothyroidism was picked up on blood tests three months following radioiodine administration, before she developed symptoms, and she was put on lifelong levothyroxine.

This is the only RCT comparing all three treatment modalities in the management of hyperthyroidism.

A Lancet seminar on the management of hyperthyroidism.

A systematic review of block replacement versus the titration regimen for treating Graves' hyperthyroidism. Similar relapse rates, but more side-effects and withdrawal of treatment were reported on the block replacement regimen.

24. Boelaert K, Maisonneuve P, Torlinska B et al. Comparison of mortality in hyperthyroidism during periods of treatment with thionamides and after radioiodine. J Clin Endocrinol Metab 2013; 98: 1869-82.

GP training: Preparing for an interview

The mandatory COVID-19 vaccine deadline for NHS staff should be delayed amid indications...

Doctors have called for rapid rollout of respiratory protective equipment (RPE) to...

Patients from a GP surgery in Cornwall have curated an art exhibition at a leading...