Section 1: Epidemiology and aetiology
Huntington's disease is an inherited neurodegenerative disorder. It is a devastating and fatal disease, characterised by motor, cognitive and psychiatric symptoms. Symptom onset is commonly between 30 and 50 years of age, although symptoms can start earlier or later in life.

There are currently no preventive or curative treatments available, although a major international research programme is continuing.

The goal of management is to reduce symptoms and improve quality of life.

Owing to the complex nature of Huntington's disease and the genetic implications, it is important for clinicians to be aware of the symptoms, therapeutic options and available services.

Epidemiology
Huntington's disease is an uncommon condition which occurs in all racial groups but is most prevalent in populations of northern European origin.

It is difficult to obtain accurate prevalence data, not least because of the stigma attached to the condition. Studies have suggested a prevalence of six to seven per 100,000 in the UK,1 but the Huntington's Disease Association puts the prevalence in the region of 12.4 per 100,000.2

The genetics
Huntington's disease is an autosomal dominant inherited condition. There is equal incidence in and transmission by both sexes and affected individuals have a 50:50 risk of transmitting the gene to their children.

The mutation responsible for causing Huntington's disease occurs within the huntingtin (Htt) gene,3 which encodes a protein called huntingtin. The mutation is an expansion of a CAG trinucleotide repeat, which encodes a mutant form of huntingtin. In the normal gene, the number of repeats is less than 27. An individual has the disease-causing mutation if they have a copy of the gene with 40 or more repeats.

This genetic instability of the trinucleotide repeat, particularly during spermatogenesis, also explains why there is a correlation between paternal transmission and reduced age of symptom onset, because the size of the expansion plays some part in determining the age of onset, accounting for 50-70% of the variation seen.

Repeat lengths of greater than 60 are typically associated with the juvenile form (onset younger than 20 years). 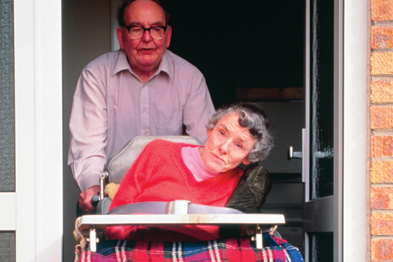 Chorea is a common symptom of Huntington's disease (Photograph: SPL)

Within each of these categories is a variety of symptoms (see box, below, for the most common). Patients will display some of these symptoms, and different symptoms occur at different stages of the disease and can vary in severity.

Changes in cognition vary between patients and worsen over time. Cognitive deficits involve executive functions, such as the ability to plan, monitor behaviour, be mentally flexible and adapt to new situations.5

These cognitive changes can have a major impact on the patient. Affected individuals tend to develop poor planning skills and judgment, and they can become disorganised and have problems with lack of insight and denial. People can also become impulsive and this can result in reckless behaviour.

Psychiatric symptoms include depression and anxiety, apathy, irritability and aggression, psychosis and obsessive compulsive disorders. There is an increased risk of suicide.

Although one of the first physical signs of the disease is chorea, there is evidence that personality and mood changes may begin a number of years before any physical symptoms.6

The psychiatric manifestations of the disease often lead to distress and difficulty for patients and their families and appropriate intervention and management are crucial. Catabolic weight loss and sleep disturbances are also common.7

The early features of juvenile Huntington's disease include significant changes in behaviour and problems at school. Around 25% of young people develop epileptic seizures, whereas adults with Huntington's disease show no greater frequency of epilepsy than the normal population.

Diagnosis
Before the identification of the Htt gene, diagnosis was made on the basis of symptoms and known family history. Now, diagnostic genetic testing can be undertaken to either confirm or rule out a diagnosis and this is usually performed by a neurologist.

It is vital that information on genetic implications is communicated before testing; informed consent must be obtained.

Prenatal testing is available for people who are at risk of Huntington's disease or who are known to have the disease-causing mutation. It is usually done via chorionic villus sampling at between 11 and 13 weeks of pregnancy. Alternatively, preimplantation genetic diagnosis uses IVF techniques and involves testing embryos for the expanded Htt gene.

Section 3: Managing the condition
Huntington's disease is a highly complex condition and its progressive nature means patients with the disease need regular assessment and re-evaluation.

Therefore, patients and their families benefit most from multidisciplinary care. Symptom management is often a matter of trial and error as there is limited evidence to support specific interventions, although this is now changing thanks to initiatives such as the European Huntington's Disease Network.

Movement disorder
There are a number of drugs that can be used to reduce chorea and other motor symptoms and these are summarised in the table below.

However, side-effects are a problem and it is therefore vital to assess the effect of symptoms, such as chorea, on the patient's quality of life.

Physiotherapy interventions can help patients to maintain their mobility and prevent falls for as long as possible and the involvement of occupational therapists is also important to ensure that the patient's home environment is suitable.

Other interventions include speech and language therapy to help with communication and swallowing difficulties, dietary advice and psychological support. Social services can also help with packages of care, respite for carers and nursing home placements.

An accurate assessment of the patient is crucial and the input of a neuropsychiatrist is helpful in more complicated cases. Patients with depression should be treated as any other patient and SSRIs are often used. For patients who are also experiencing insomnia with their depression, a more sedative antidepressant, such as mirtazapine, can be helpful.

Atypical neuroleptics, such as olanzapine and risperidone, can be very helpful in managing irritability and aggression. Other psychiatric symptoms, including obsessive compulsive disorder and psychosis, should be treated according to recommended guidelines.

It is more difficult to pharmacologically manage some of the behaviours in Huntington's disease which are caused by the cognitive changes. These include problems such as perseveration, rigid thinking, lack of insight and denial, impulsivity and demanding behaviour.

Some helpful strategies include the use of routines and a consistent approach, keeping the environment as calm as possible, allowing time for the person to communicate and carry out tasks, using distractions, giving specific time limits, being aware of triggers for difficult behaviour and avoiding confrontation.

Where possible, the patients' preferences regarding place of care and place of death should be respected, although it is often not possible for them to remain at home, even with a full and well-planned care package.

Advanced decisions to refuse treatment can be helpful because they allow patients to state their choices regarding interventions, such as percutaneous endoscopic gastrostomy feeding, while they are still able.

Management of symptoms, such as agitation, pain and excess secretions, is vital and the input of palliative care specialists can be useful.

Section 5: Case study
The husband of a 58-year-old woman with a genetically confirmed diagnosis of Huntington's disease, who was well known to the multidisciplinary clinic, contacted the team via the nurse-led telephone clinic.

Tetrabenazine had previously been prescribed to dampen her chorea, however her mood deteriorated significantly, so the tetrabenazine was withdrawn and olanzapine started, initially at 2.5mg at night.

Unfortunately her chorea had continued to worsen and it was now having a major impact on her daily life and she had developed pressure sores on her sacrum and one foot due to her constant movements.

In the first instance, the team contacted the patient's GP and recommended increasing the dose of olanzapine to 10mg and a referral to the local tissue viability nurse.

The team also sent information to the occupational therapist regarding possible seating options for people with severe chorea.

Jaw stiffness and clenching
After two weeks on the increased dose of olanzapine, her chorea had not improved and she had started to develop a clenching and stiffness of the jaw.

Her husband reduced the olanzapine back to 7.5mg and contacted the clinic again. The option of her starting on clonazepam 0.5mg twice daily was discussed and it was explained that while this might be helpful for her chorea, it could cause sedation and worsening of her cognition and mobility.

After consideration, the patient agreed that she would like to try the clonazepam, so the team liaised with the GP regarding a prescription.

One month on, the patient and her husband reported a significant improvement in her chorea.

She did feel a little drowsier, however she explained that this was an acceptable side-effect, given the overall improvements in her comfort and quality of life.

Studies are focused on: