The prevalence of HF is rising with the ageing population and improved treatments mean more patients survive ischaemic events. The cost of HF to the NHS is estimated to be as much as 2% of total expenditure, because it is present in up to 10% of inpatients and is the cause of up to 5% of acute admissions.3

IHD and hypertension are the two main causes of HF in the developed world.4 AF is another common association, and valve disease and cardiomyopathies can each account for up to 10% of cases.4

Classification
The term 'acute HF' has been superseded by three types according to presentation: new-onset HF, transient (episodic or recurrent) HF and chronic (persistent symptoms) HF.

Cardiac ejection fraction (EF), measured using echocardiography, has for years been a surrogate measure of the systolic function of the heart. This refers to the fraction of the cardiac end-diastolic volume that is ejected with each heartbeat. An EF ≥55% is consistent with normal systolic function.

The term diastolic HF - often replaced by preserved or normal EF (HFPEF or HFNEF) - is increasingly recognised, because up to half of patients with symptoms of HF can have a normal or near-normal EF.

A detailed history is paramount.

However, in early HF, the clinical examination may be normal and the GP should consider the diagnosis based on the history and investigations. There is poor correlation between symptom severity and prognosis, but it is useful to stage symptom severity using NYHA or ACC/AHA classifications.

NICE guidelines offer a succinct diagnostic algorithm for diagnosing HF, depending on the presence or absence of previous MI.5

If the history and examination indicate possible HF, the patient needs to be referred for specialist assessment and echocardiography.

If the echocardiogram shows no abnormality consistent with HF, serum B-type natriuretic peptides (BNP) should be measured. If levels are raised (see below), consider a diagnosis of HFPEF. If they are normal, HF is unlikely.

BNP can be used to diagnose diastolic HF, as recommended by NICE, as long as false positive causes are excluded. If the history and examination are suggestive of possible HF, the next step is to measure BNP or N-terminal pro-B-type natriuretic peptide (NT-proBNP).

If levels are high (BNP ?400pg/mL or NT-proBNP >2,000pg/mL), patients should be referred for specialist assessment and Doppler echocardiography within two weeks.

If BNP is ≥100-400pg/mL or NT-proBNP is 400-2,000pg/mL, specialist assessment and echocardiography should take place within six weeks. If the levels are normal (BNP ≤100pg/mL), HF is unlikely and other diagnoses should be considered. Serum levels are also useful to assess the patient's prognosis and monitor the efficacy of treatment.

Investigations
Routine tests include FBC, renal function, including electrolytes and eGFR (monitored serially during initiation and uptitration of diuretics, ACE inhibitors or ARBs), TFTs and LFTs, glucose, fasting lipids and urinalysis. Troponin measurement should only be considered if a recent acute coronary syndrome is suspected to have led to HF.

ECG is mandatory in all patients because it can provide evidence of a previous MI or associated arrhythmias, such as AF. ECG features, such as left bundle branch block (LBBB) and QRS duration, are essential in decision-making for implantation of an implantable cardioverter defibrillator (ICD) or cardiac resynchronisation therapy (CRT).

Chest X-ray is also mandatory, to assess pulmonary congestion and cardiomegaly, and rule out pulmonary causes of dyspnoea. Lung function tests may be considered.

Radionuclide imaging or cardiac MRI can be used to assess EF. Cardiac MRI helps to differentiate between aetiologies such as ischaemia, inflammation or infiltration.

If ischaemia is suspected as the cause of HF, further tests, such as coronary angiography, myocardial perfusion imaging, CT angiography and stress echocardiography, can also be considered.

The role of the GP
A large cohort of patients in the community with a diagnosis of HF made by a GP using a clinical approach showed that the accuracy of diagnosis can be comparable to that of cardiologists using defined diagnostic criteria.2 GPs can make an early clinical diagnosis and influence the outcome by early initiation of therapy. 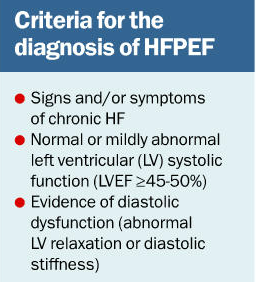 Management of HF should focus on relieving symptoms, improving quality of life and prolonging survival by a combination of lifestyle measures, and pharmacological and non-pharmacological interventions.

HF management is prolonged and many of the treatments have side-effects, so it is important for patients and their carers to be fully involved in decision-making.

Lifestyle modifications include smoking cessation and restriction of salt (less than 2-3g per day) fluid and alcohol (avoidance of alcohol in cases of alcohol-related cardiomyopathy).

Physical training as part of a supervised cardiac rehabilitation programme has been shown to have beneficial effects. Advice should also be provided regarding sexual activity, air travel and the importance of annual influenza vaccination.

GPs play an important part in reinforcing lifestyle advice and can be a bridge between the patient and secondary or tertiary care.

HFPEF
HFPEF confers a similar prognosis to that for HF with impaired EF, but as yet, no drug has been found to improve survival in these patients. It is important to control the causative comorbidity, such as hypertension, diabetes or ischaemia, aggressively.

Aldosterone receptor antagonists are added if the patient continues to exhibit NYHA class 2-4 symptoms, but require close monitoring of renal function and electrolytes.

Ivabradine should be considered after a cardiologist's advice if the patient is intolerant to beta-blockers or their heart rate remains suboptimally controlled, at >70 beats per minute (bpm). Other drugs include combinations of nitrate and hydralazine (if ACE inhibitors/ARBs are contraindicated) and digoxin.

According to NICE guidelines, CRT should be considered in patients with EF ≤35%, LBBB with QRS duration ≥150ms or if QRS duration is 120-149ms with evidence of mechanical dyssynchrony, and continuing or recent NYHA class 3/4 symptoms while on optimal medical therapy.

A diagnosis of HF confers a poor prognosis. One study has shown that HF had the lowest five-year survival rate of 25% when compared with common cancers (with the exception of lung cancer).6

Despite significant advances in management options, more than half of patients with severe HF die within a year.7

Although HF is a chronic condition, there is a significant risk of sudden death and this makes prognostication difficult. Various clinical risk-scoring systems have been advocated to help predict individual prognosis, especially in patients admitted because of HF.

Accurate risk prediction is important because it helps to define the role of pharmacological and non-pharmacological therapies, as well as the need for palliative care.

EF, the six-minute walk test10 and BNP have been shown to be strong independent predictors of the risk of hospital admission and mortality.

Newer methods of assessing arrhythmic risk include T-wave alternans, heart rate variability and baroreflex sensitivity, although as yet, none of these has been widely applied in mainstream clinical practice in the UK.

Follow-up
Patients with stable NYHA class 1 symptoms who are well established on optimal medical therapy and understand self-care (dietary and fluid management) are usually discharged to GP follow-up with a plan for re-referral to hospital-based management if they deteriorate.

Patients can also be managed by HF specialist nurses in the community - this can improve quality of life and reduce readmissions.11

A 54-year-old man presented to his GP with a three-month history of worsening exertional dyspnoea.

He is a current smoker with a 40 pack-year history and a positive family history of IHD. There was no history of hypertension, diabetes or hyperlipidaemia.

There was no associated chest pain, cough or orthopnoea, but there had been five episodes in the past two weeks suggestive of paroxysmal nocturnal dyspnoea. His BP was 124/60mmHg and his pulse was 96bpm and regular.

ECG performed at the surgery showed normal sinus rhythm and poor progression of R waves, but no other significant abnormalities.

The GP made a presumptive diagnosis of HF, offered lifestyle advice and requested routine blood tests, including BNP.

The patient was started on furosemide 40mg twice daily and bisoprolol 1.25mg once daily, with a plan for follow-up with BNP results.

When he was seen later in the week, he reported improvement in his dyspnoea (NYHA class 1); his JVP was now normal and there was no pedal oedema. Routine bloods were within normal limits, but his BNP was elevated, at 555pg/mL.

The GP explained to the patient that this was indicative of HF and he would require an echocardiogram in secondary care (within two weeks as recommended by NICE). The patient was started on an ACE inhibitor, with a plan to repeat renal function tests the following week.

Cardiologist review
The echocardiogram showed normal valve function, but severely impaired LV systolic function with an EF of 35%. The GP referred the patient for urgent cardiologist review. The patient remained at NYHA class 1 and was reviewed in the cardiology outpatient clinic after 10 days, when his beta-blocker and ACE inhibitor doses were uptitrated.

Lifestyle advice was reiterated and he was followed up six-monthly, with stable symptoms. An echocardiogram the following year showed an improved EF of 45%.

This large population-based study of a UK GP practice population of about 700,000 assessed the incidence and outcome of HF based on clinical diagnosis by GPs. It showed that identification of HF by GPs is comparable to diagnosis by cardiologists using diagnostic criteria.

Information on all aspects of the aetiopathogenesis, classification, diagnosis and management of patients with HF.

The RCGP and the Royal Pharmaceutical Society have called on GP practices and community...

GP appointments have risen rapidly in recent weeks as schools returned, according...

Medical training and the future NHS workforce could be seriously damaged by the financial...