Section 1: Epidemiology and aetiology
Glomerulonephritis (GN) encompasses a disparate family of kidney disorders that can occur at any age.

Although the term implies glomerular inflammation, numerous non-inflammatory diseases can also compromise glomerular integrity. Among these, diabetic nephropathy is particularly important, as are the hereditary nephropathies, including Alport's syndrome. Registry data focus on the causes of end-stage renal disease (ESRD), so accurate data on prevalence of GN are scarce as only a relatively small number progress to dialysis or transplantation.

GN is separated into primary, when restricted to the kidney, or secondary, when the kidneys become involved in a multisystem disorder.

GN is principally classified according to histological appearance. This is not ideal, as any one biopsy pattern can result from several underlying aetiologies and many kidney insults can generate an array of histological appearances. Histology is thus best viewed as a description that is incomplete without careful clinical correlation (see box).

For example, focal and segmental glomerulosclerosis (FSGS) affects some glomeruli but not all, and only part of any affected tuft. The disease leads to scarring. Diffuse proliferative crescentic glomerulonephritis affects most glomeruli, with increased cell number and crescent formation in Bowman's space (see image). 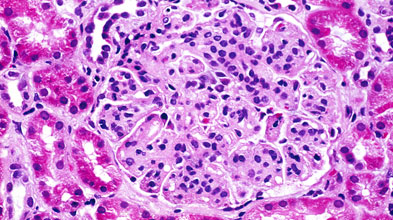 Many glomerular diseases result from immune dysregulation, either autoimmunity or an ineffective response to a foreign antigen. Antigens may be native to the glomerulus itself (as in anti-glomerular basement membrane disease), or part of trapped circulating immune complexes that cause glomerular injury through activation of complement and recruitment of inflammatory cells. An inflamed glomerulus may heal to normality, or scar with glomerulosclerosis. Associated tubulointerstitial inflammation often resolves with fibrosis. This will manifest as impaired kidney function and chronic kidney disease (CKD).

Many causes of the nephrotic syndrome are now thought to be secondary to podocyte malfunction or injury. These highly specialised cells form a crucial component of the glomerular filtration barrier.

Genetic associations of GN have been studied, but none is very specific or compelling.

Early referral for evaluation is important, as timely treatment may slow or prevent development of associated CKD.

While the likelihood of a particular GN might be determined from the age of the patient, clinical scenario and laboratory tests, diagnosis ultimately requires histological confirmation via a kidney biopsy. However, despite the appeal of a definitive tissue diagnosis, the risks of a biopsy must always be weighed against benefits. Although the complication rate is low, the findings, especially in patients with mild disease, may be of limited prognostic value.

When GN presents late, with advanced CKD and small kidneys on imaging, a biopsy is less likely to be informative - and is much more hazardous. A biopsy is therefore reserved for those patients in whom specific treatment is potentially indicated, or when assessment of prognosis is imperative.

An exception is minimal change disease in children, where the clinical presentation is so characteristic that it usually prompts a trial of corticosteroids without histological confirmation.

In very general terms, mild haematuria and low level proteinuria (particularly <1g/day) in the absence of renal impairment or hypertension are associated with a favourable long-term prognosis. Such patients are usually best managed with regular monitoring.

Section 3: Managing the condition
The treatment of glomerulonephritis has several objectives: to control symptomatic nephrotic syndrome when present, to slow deterioration in kidney function and, where possible, to control an underlying disease process.

Measures include treatment of BP, reduction in urinary protein excretion, control of oedema, avoidance of nephrotoxins and correction of any other consequences of the condition, including those of a reduced GFR, such as anaemia and secondary hyperparathyroidism.

There are convincing arguments for the use of ACE inhibitors or ARBs as first-line drugs because their renoprotective effect extends beyond their antihypertensive action. However, as salt and water overload is often present, diuretics (along with modest dietary sodium restriction) also form an important part of treatment.

Proteinuria
Proteinuria represents another important therapeutic target. There is good evidence that proteinuric urine may be toxic to the renal tubulointerstitium, so if possible it should be reduced to <0.5g/day (uPCR <50mg/mmol or uACR <35mg/mmol). There is probably little difference between using an ACE inhibitor or ARB treatment.

Combined use
Whether ACE inhibitors and ARBs have an additive antiproteinuric effect remains unproven. Whilst a meta-analysis found a significantly greater reduction in proteinuria in combination (18 to 25 per cent), the study that most strongly suggested a reduction in disease progression (COOPERATE) was subsequently retracted. That said, many clinicians advocate their combined use, although the increased incidence of adverse effects mandates close supervision. Treatment of hyperlipidaemia should follow general population guidelines. Nephrotoxins, especially NSAIDs and radiocontrast agents, should be avoided where possible.

Specific treatments for individual glomerular diseases are beyond the scope of this article. However, treatment may involve measures to remove a foreign antigen, such as antibiotics for endocarditis. Otherwise, therapy generally consists of immunosuppressive strategies aimed at aberrant immune responses.

Lack of data
There is a disappointing lack of data from RCTs to assist clinical decision making, even for the more common types of GN, such as IgA nephropathy. Judgments regarding treatment must always be individualised, weighing benefits against risks.

In general, there has been little success for immune suppression in slow progressive forms of GN. The mainstays of treatment remain corticosteroids, azathioprine and cyclophosphamide. Newer agents, often developed in transplant or oncology fields, include tacrolimus, mycophenolate and rituximab. 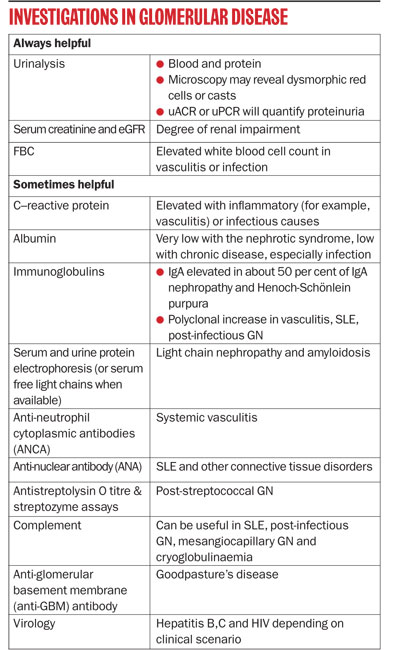 Section 4: Prognosis and follow-up
Long-term follow-up is essential. In many cases this could be in primary care, with six to 12-monthly measurement of BP, eGFR and urinary protein excretion. Changes in any parameter should prompt a more thorough re-evaluation.

The presence of CKD and its complications requires more regular follow-up.

Some forms are self-limiting. For example, <1 per cent of children with post-streptococcal GN develop CKD. For others, such as membranous GN, the prognosis is dependent on response to treatment.

Many glomerulonephritides have a range of potential outcomes depending on clinical presentation and initial biopsy appearance. For example, for IgA nephropathy presenting with recurrent macroscopic or isolated microscopic haematuria, the prognosis is excellent; for a nephritic presentation with crescentic change on biopsy, it is considerably worse. In many cases, urinary abnormalities will be present lifelong. However, an escalation in proteinuria is generally associated with a poorer prognosis. If kidney scarring is present, then progressive deterioration in function may also occur through non-immune pathways, leading to advanced CKD with an eventual need for dialysis or transplantation.

Furthermore, many forms of GN can recur in a transplant, with varying degrees of prognostic significance.

Section 5: Case Study
A 46-year-old woman was referred for assessment of proteinuria (uACR 310mg/mmol). Her medical history included hypertension in her first pregnancy and pre-eclampsia in her second. She has previously been told that she has blood in her urine, but tests have always been clear of infection. She smoked 15 cigarettes a day and had a BMI of 32. Clinical examination was unremarkable, besides a BP of 162/96 mmHg on the day. Urinalysis showed 2+ blood and 3+ protein.

It is likely she has had an active glomerular lesion for several years and this may have predisposed her to problems in pregnancy. It would explain persistent microscopic haematuria, although separate urological evaluation would be desirable, particularly as she smokes.

The patient was commenced on an ACE inhibitor for both her hypertension and proteinuria. A diagnostic and prognostic kidney biopsy revealed a mesangial proliferative glomerulonephritis with positive immunostaining for IgA, indicating IgA nephropathy. There was also marked hypertension-induced arteriosclerosis, as well as the significant glomerular sclerosis and 40 per cent interstitial fibrosis.

The patient was given specific education regarding IgA nephropathy as well as more generally regarding CKD. She was referred for smoking cessation counselling and given lifestyle advice.

Target BP was achieved with the addition of an ARB and a diuretic. Her uACR reduced progressively to 80mg/mmol. Her eGFR stabilised at approximately 25ml/min. However, given her age and scarring evident on the biopsy, it is likely she will progress to ESRD.

She was counselled on this matter and several potential live kidney donors came forward in the subsequent year.

Section 6: Evidence base
While there has been a paucity of clinical studies, there have been many recent publications addressing the underlying mechanisms of glomerular disease.

The nature of the autoimmune responses responsible for membranous GN is being uncovered rapidly - this will hopefully lead to real progress in the diagnosis, prognosis and treatment of the clinical disease.

Having previously reported that dietary fish oil supplementation retarded the progression of renal disease in patients with IgA nephropathy in a two-year clinical trial, this study concluded the influence of treatment extended further.

This study is one of the few randomised trials addressing the treatment of a common GN. However, the role of fish oil, which may act by anti-inflammatory mechanisms, remains unclear. Other trials have reported conflicting results and compliance with treatment is poor.

The MDRD trial patient cohort has been a valuable resource within nephrology and the basis for several important publications. It suggested both the rate of progression and the effectiveness of antihypertensive therapy might be related to protein excretion, itself a function of the severity of glomerular injury.

The key messages are summarised in useful algorithms on pages 19-21.

KDIGO is a global, non-profit foundation aiming to improve the care and outcomes in kidney disease. It is producing a series of guidelines with the goal of identifying and harmonising current best practice. A guideline concerning GN is expected in 2011. This is likely to be a major international resource in this area.

A helpful resource for patients and healthcare professionals alike.

A useful summary with multiple additional links out.