It is important to identify glaucoma early, because treated patients rarely become blind.

Worldwide, glaucoma affects an estimated 66.8m people, with 6.7m blind from the condition. In the UK, it accounts for 10-15% of certificate of visual impairment registrations, and 0.5m patients live with it.2 It is thought that an equivalent number of cases remains undiagnosed in the community.

Risk factors
Age is the most important risk factor for glaucoma. In 1999, the government reintroduced funded eye tests for people aged over 60 and for those aged over 40 with first-degree relatives affected (threefold increased risk), because family history of the disease is important.

Glaucoma is more prevalent in African and African-Caribbean populations, tending to be more severe and difficult to treat.3 Population studies have suggested an association with diabetes, systemic hypertension and myopia.

Glaucoma aetiology is incompletely understood. In most cases, pathological change at the optic disc is attributed to elevated intraocular pressure (IOP), although in up to one-third of cases, IOP is normal. In addition, disturbed autoregulation and glutamate excess may contribute to apoptotic neuronal cell death.

Molecular genetics has found more than 20 genetic loci and three genes with links to proteins at the drainage angle and optic disc. Better understanding of glaucoma genetics has the potential to revolutionise screening and therapy.

Classification
Classification is based on the appearance of the drainage angle. Primary open angle glaucoma (POAG) is more common in the UK.

Early glaucoma is asymptomatic. The diagnosis is usually suggested by a chance finding of one of three examination features: cupped disc, visual field defect or raised IOP.

Disc changes or field defect (less commonly) may be the sole manifestations of early disease.

Optic disc examination requires technical proficiency and is subjective, with change over time being difficult to monitor.

Stereoscopic disc photographs have been the gold standard in documenting optic disc changes. Recently, quantitative thickness imaging of the optic disc and retinal nerve fibre layer has supplemented this.

An experienced patient takes about five minutes per eye to complete an automated field test. There is a learning curve and if initial defects are found, tests should be repeated.

Some patients find field tests arduous and perform unreliably, and test variability is common. Any discrepancy between pattern or extent of field loss and optic disc appearance is an indication for brain imaging (for example, pituitary adenoma), especially where IOP is normal.

Raised IOP needs care in interpretation and measurement. High IOP (>21mmHg) is a statistical definition (outside two SD of the population mean) and may not apply to the individual.

The physiological diurnal variation in IOP levels is exaggerated in eyes with glaucoma.

All newly diagnosed patients should undergo central corneal thickness measurement and examination of the drainage angle (gonioscopy) and front of the eye, looking for features of secondary glaucoma (such as uveitic) and angle closure.

Where glaucoma is not confirmed, disc imaging, field analysis and IOP may need to be evaluated serially for several years. NICE recommends using the same equipment to compare results at each review.4

The treatment strategy is to preserve functional vision and quality of life for the patient's lifetime.

Each patient is set a target pressure, the IOP below which optic nerve damage is not expected to occur. Thereafter, the patient is monitored to look for damage progression.

If deterioration occurs despite this IOP being achieved, the target is lowered.

Tailoring treatment
Initially, lower IOP is achieved in most patients with daily eyedrops - usually monotherapy with prostaglandin analogues/prostamides. These are effective, require once- daily dosing and have minimal systemic side-effects.

Therapy needs to be tailored to the patient. An infirm, elderly patient with minimal field loss may be better off with no treatment if problematic field loss is unlikely to develop in their lifetime.

Topical beta-blockers are more often used as second-line therapy. A second, third and occasionally fourth drop is added to achieve target IOP. There are several classes of agents with different mechanisms of action that have a synergistic effect.

Fewer than half of all patients take their drops correctly6 and multiple drops worsen compliance. Co-operation with regimens significantly improves outcomes and cost-efficiency.

Combination drops are frequently used to improve compliance, efficacy and quality of life (see box). The first combination drop without a beta-blocker has recently become available. 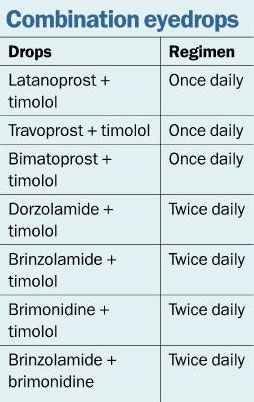 Laser therapy
Laser therapy has come back into favour because the newer lasers are less destructive than their predecessors. Selective laser trabeculoplasty (SLT) targets the trabecular meshwork in the anterior chamber angle to increase outflow, probably by inducing metabolic changes in the cells.

SLT works in about 70% of cases and can be repeated when the effect wears off, usually after several years.

Drainage surgery
Surgery is usually reserved for when medical treatment fails. In trabeculectomy, a channel under the conjunctiva is created for drainage and often supplemented with topical antimetabolites to prevent blockage of outflow by fibrous scarring.

When trabeculectomy fails or is likely to fail, a drainage tube is inserted under the conjunctiva, projecting into the anterior chamber, to create an outflow pathway.

Most treated glaucoma patients will not go blind. The main risk factors for blindness are advanced disease at presentation and suboptimal IOP control. Poor compliance with treatment and follow-up appointments are also a risk factor for sight loss.

The major challenge is to identify progression. Significant nerve fibre loss may occur with minimal apparent deterioration in visual field or disc. Subtle change requires sophisticated analysis that can detect deterioration against a background of normal ageing changes and other patient factors.

Treatment and follow-up of glaucoma is lifelong. The frequency of follow-up depends on disease severity and stability.

Stable patients with early glaucoma can be managed in well-equipped community clinics with specialist support. Advanced and unstable glaucoma is better managed in secondary care, with intensive monitoring and intervention.

A 64-year-old African-Caribbean woman was found to have left disc haemorrhage on diabetic eye-screening and was referred for tests to exclude glaucoma. There was no family history of glaucoma.

Eye clinic examination confirmed IOP was at the upper limit of normal (21mmHg) in both eyes.

Her corneal thicknesses were slightly reduced, gonioscopy revealed open narrow angles with early cataracts and 6/9 (0.2LogMAR) vision in each eye. Visual fields showed missed spots on the right, but both fields were unreliable, with multiple fixation errors. 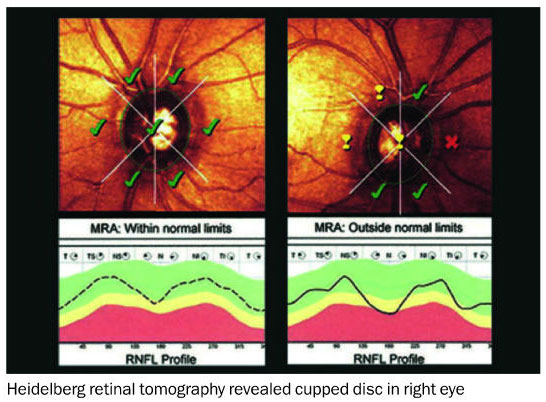 Raised IOP
No definite glaucoma damage was found and the patient was reassessed a few months later, to check the range of IOP levels over one day (phasing) and repeat fields.

This confirmed that she tended towards raised IOP in both eyes. Her levels ranged from 22-26mmHg right and 20-25mmHg left.

The right visual field was slightly improved from the previous visit, but Heidelberg retinal tomography showed a right cupped disc.

She was started on drops bilaterally to lower her IOPs to the mid-teens.

She now has a diagnosis of right glaucoma and left glaucoma suspect. She is using topical prostaglandin analogue at night with IOPs at 14mmHg in both eyes. She also has a developing cataract and is under six-monthly review.

This case illustrates the importance of taking strategic decisions based on quantitative data where possible, but also the difficulty of preventing visual field loss because of variable findings over time.

This study found significant reduction in glaucoma damage in 'normal IOP' patients with progressing glaucoma if treated, compared with control over four years.

This study found reduced mean field loss with lower IOPs in patients randomised to laser or surgery where medication had failed.

This study found less development of glaucoma loss in patients with IOP >21mmHg randomised to treatment, compared with control over five years, the benefit of treatment being much greater in patients at higher risk of glaucoma.