Section 1: Epidemiology and aetiology
Degenerative spine disease (DSD) is a general term which includes spondylotic (arthritic) and degenerative disc disease of the spine with or without neuronal compression or spinal instability. DSD is a common condition, especially in the ageing Western population.

In symptomatic patients, a significant proportion of symptoms develop due to bony, discal or ligamentous compression of neural elements at the spinal canal or nerve root exit foramina. Cauda equina syndrome due to compression of the cauda equina by a herniated central lumbar disc is a neurosurgical emergency.

Aetiology
In the vast majority of patients, DSD represents the consequence of 'normal wear and tear'. Other causes include a congenitally narrowed spinal canal, genetic predisposition to early disc disease, trauma, infection, inflammation and rarer conditions such as ossification of the posterior longitudinal ligament.

Whatever the mechanism, the distribution of the static and dynamic axial load along the spinal column plays a central role in determining the pattern of degeneration. In the cervical spine, as sites of lordosis inversion (change in curvature of the spine), the C5 to C7 levels are most commonly affected (A) while in the lumbar spine degenerative changes are most frequent at L4 to S1 given the maximal axial load experienced at these levels (B). The relative paucity of motion at the thoracic spine protects this part against DSD.1 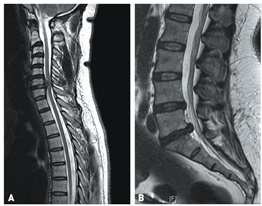 Section 2: Making the diagnosis
The primary symptom associated with DSD is axial spinal pain. Back pain has a prevalence rate of 12-35 per cent in the Western world with 10 per cent of patients becoming disabled.

The other presenting features of DSD depend on the site of disease, the degree of neural compression and rate of development.2

Myelopathic symptoms
A narrowed central spinal canal in the cervical and thoracic spine may lead to compression of the spinal cord and development of myelopathic symptoms below the level of compression (pictured below). These include paresthesia and numbness in the limbs, loss of manual dexterity, difficulty walking, a spastic gait, and bowel and bladder dysfunction.

Clinical examination may reveal upper motor neuron signs such as pyramidal weakness, hypertonia and hyper-reflexia below the level of the compression with an extensor plantar response.3

If the compression extends further laterally to involve the exiting nerve roots, at the level of the compression there may also be associated radiculopathic symptoms such as pain, paresthesia and numbness as well as lower motor neuron signs such muscle wasting, weakness, hypotonia and hyporeflexia.

Radiculopathic features may develop without myelopathy if compression occurs solely laterally, involving the nerve roots without central compression of the spinal cord.

Of note, compression of a single nerve root will lead to signs and symptoms confined to the dermatome and myotome supplied by that nerve root. Thus careful clinical evaluation is paramount in determining the level of symptomatic compression.

Lumbar spine
In the lumbar spine, central spinal canal stenosis typically presents chronically and with signs and symptoms of multi-nerve root dysfunction, termed spinal claudication. Thus patients classically complain of back and progressive leg pain, numbness and heaviness on exertion with symptoms resolving at rest or on forward flexion.

Intermittent claudication due to vascular insufficiency in the legs is an important differential diagnosis.

This is a neurosurgical emergency warranting urgent referral and treatment. Lateral compression of a nerve root in the lumbar spine presents with characteristic dermatomal radicular pain (sciatica) with associated lower motor neuron signs and symptoms.

Investigations
In terms of investigations, imaging techniques are the most useful.1 Plain X-rays, particularly performed in flexion and extension, will help to identify any spinal instability. The imaging modality of choice, however, is MRI.

MRI allows clear visualisation of the neural elements and defines any areas of bony, ligamentous or discal degeneration and compression. CT scan remains a useful alternative to MRI.

CT is also useful when detailed information about the bone structure is required, particularly in patients who are to undergo instrumented spinal fixation.

Section 3: Managing the condition
It is increasingly recognised that management of DSD requires a multidisciplinary team approach comprising neurosurgeons/spinal surgeons, pain specialists and physiotherapists. This is important in order to provide the patient with the most effective treatment for their particular symptoms and to use the available resources effectively to achieve maximum patient satisfaction.

Although patients with DSD represent the biggest group of patients seen in a general neurosurgical clinic, only a small proportion will ever undergo surgery.

Surgery
The role of surgery in such patients remains controversial. Spinal fusion and the more recently developed technique of prosthetic disc replacement, to preserve spinal mobility, may be of benefit in selected patients.

In patients with DSD and radicular pain, six weeks of conservative measures is usually sufficient to resolve the symptom. If severe pain persists beyond six weeks or if motor neurological deficit is present, such as a foot drop or arm weakness, serious consideration should be given to surgery.5

The timing of surgery is particularly important if neurological recovery is to be achieved. The aim of surgery here is to decompress the neural elements. Thus in the lumbar spine, lumbar laminectomy or lumbar microdiscectomy may be performed, while in the cervical spine, cervical foraminotomy or anterior cervical discectomy, usually combined with cage fusion at the site of the removed disc (pictured right), are the most frequently performed surgical procedures.

Section 4: Prognosis
Prognosis of patients with DSD depends not only on the underlying diagnosis and delivery of prompt treatment, but also on a number of psychosocioeconomic factors.

Motivation
Well-motivated patients with good support networks are more likely to make a good recovery and return to work.

Despite the treatments available, 10 per cent of patients become chronically disabled, particularly due to back pain. This is associated with significant psychological morbidity and economic loss.

In others, conservative and surgical measures are effective in controlling the symptoms. Lumbar claudication and radicular pain respond well to surgical decompression with up to 90 per cent pain relief.

Timing of surgery
When motor weakness complicates nerve root compression, or in patients with cauda equina syndrome, the timing of surgery is crucial in determining neurological recovery. The best results are seen in patients operated on within 48 hours of the presentation.6

The prognosis for recovery of sensory deficits such as numbness and paresthesia is more unpredictable.

In patients with progressive myelopathy, the primary purpose of surgery is to arrest further neurological deterioration. Neurological recovery is sometimes seen, particularly if surgery is performed within one year of the onset of symptoms.3

Active role for GPs
Given the large number of patients with DSD, the majority continue to be managed in primary care or are discharged from the specialist back to primary care following completion of specific treatment.

The role of the GP remains crucial not only in day-to-day treatment of these patients, but in their surveillance and timely referral back to specialist care if required.

Section 5: Case study
A 75-year-old man was referred by his GP to the neurosurgical clinic with a four-year history of progressive bilateral leg pain on exertion. The patient also had a long history of intermittent back pain, which first started in his thirties when working as a factory worker.

Controlled subacute pain
Over the years, the back pain had been controlled using simple analgesics.

In recent years, this had been complicated by bilateral leg pain radiating from the lower back into both legs, stopping just above the ankles. This was brought on by walking around 500 yards and was associated with numbness, paresthesia and 'heaviness' in both legs.

The symptoms resolved after one to two minutes rest and he had not had any falls. There was no sphincter disturbance. He had hypertension and smoked 20 cigarettes per day. His leg symptoms had failed to respond to analgesics or physiotherapy.

On examination, he was slightly overweight with limited range of lumbar spine movements primarily because of back pain and stiffness. Straight leg raising was limited to 50 degrees bilaterally with no motor or sensory deficits. He had normal pedal pulses.

The patient was investigated using an MRI scan of the lumbar spine. This showed lumbar canal stenosis, particularly at L1/2 to L3/4 levels (pictured above).

Surgical procedure
Given the failure of the conservative measures and the impact of symptoms on the patient's quality of life, informed consent was obtained to proceed to lumbar laminectomy to decompress the spinal canal and the exiting nerve roots.

Surgical risks discussed included infection, bleeding, dural tear, cerebrospinal fluid leak, neurological deficit and disease recurrence. It was also clarified that the surgery was intended to improve the leg symptoms rather than the back pain.

The patient was advised to lose weight and stop smoking and an anaesthetic pre-assessment was also arranged. Surgery was performed without any complications and he was discharged four days later following physiotherapy and occupational therapy assessment.

At six months follow up, his leg symptoms were reported to have improved by 80 per cent and he was able to walk for more than two miles. His back pain had remained unchanged.

In a Finnish trial, 94 patients with lumbar canal stenosis were randomised to laminectomy, with or without fusion, or conservative therapy. The main finding was that at two years the patients in the surgical group had greater improvement in leg and back pain compared with those in the conservative group.

In a Dutch trial, 283 patients with six to 12 weeks of sciatica due to prolapsed lumbar disc, were randomised to early discectomy or six months of continued conservative treatment with delayed surgery if needed. The main finding was that early surgery achieved a more rapid improvement in sciatica than non-surgical care, although the outcomes were similar by one year.

Curriculum
The RCGP covers this topic in statement 15.7 of the GP curriculum 'Neurological problems'