Chlamydia trachomatis is the most common bacterial STI in the UK.1

The National Chlamydia Screening Programme in England and Wales aims to reduce the prevalence of infection by opportunistically testing young people most at risk.

To date, it has screened more than five million individuals, leading to more than 370,000 new diagnoses.3 The HPA recommends that local authorities should aim to diagnose 2,400 infections per 100,000 residents aged 15-24 years annually.4

The WHO estimated that there were 106 million incident cases of chlamydia worldwide in 2008, although regional variations are significant.5 Seven countries in Europe reported that the national prevalence in those aged 18-44 was 1.4-3%.6 In developing countries, the reported prevalence in high-risk groups is often higher.7-9

Risk factors for infection include younger age (15-24 years), multiple sexual partners in the previous three months and inconsistent use of barrier contraceptives.10,11

The presence of cervical ectopy and hormonal contraceptive use have also been investigated, but results are variable and no firm association has been found.12,13

Classification
C trachomatis is a small Gram-negative bacteria and its serovars are grouped according to clinical syndromes and pathology. A-C cause ophthalmic trachoma, prevalent in Africa, while D-K are responsible for the genital and pelvic infection most often referred to as 'chlamydia' in the UK.

LGV is traditionally a tropical infection. There have been several recent outbreaks of LGV among men who have sex with men in Europe and the US.14

The clinical features of genital chlamydia infection are summarised in table 1. It has an incubation period of seven to 14 days and asymptomatic infection is common.

In men, urethral discharge and/or dysuria are often but not exclusively associated with normal urinalysis.

UTIs are uncommon in younger men and clinicians should employ a low threshold for performing chlamydia screening if any such symptoms are described.

Pharyngeal infections are most often asymptomatic and only men who have sex with men should have routine pharyngeal sampling.

Rectal infection may be asymptomatic, but proctitis, tenesmus and rectal discharge are common presenting complaints.

Chlamydia can present with PID, although the estimated risk for an individual varies between studies.15 Minimal investigations include pregnancy testing and swabs for chlamydia and gonorrhoea, although there are other infectious causes.16

NAATs are significantly more sensitive and specific than chlamydia ELISA or culture, and they facilitate less invasive sampling.18

Optimal specimens include first-catch urine in men and either an endocervical swab or a (self-taken) vulvovaginal swab in women. Specific sampling kits are required by each NAAT machine, thus clinicians should refer to local protocols.

Although off-licence, NAATs can also be used to diagnose rectal and pharyngeal infection in men who have sex with men, and validation work is under way.19

Three points must be addressed when treating patients diagnosed with chlamydia infection.

National treatment guidelines are produced by the British Association for Sexual Health and HIV (BASHH).20

Azithromycin has the advantage of being a single-dose regimen, allowing supervised treatment in clinic, obviating risks of treatment failure from poor adherence.

However, azithromycin should be taken on an empty stomach to maximise absorption and it frequently causes minor GI upset. More importantly, there is emerging evidence of increasing resistance to azithromycin in chlamydia spp.21 Treatment failure with macrolides in pharyngeal infection has also been documented;22 azithromycin is not recommended for extragenital chlamydia infection.

Doxycycline had become a less popular treatment option, due to the lengthier course and the need to avoid prescriptions in women who are or could be pregnant.

However, doxycycline is not subject to the same concerns of emerging resistance as azithromycin and it remains the treatment of choice in extragenital chlamydial infection.

If resistance to azithromycin becomes more widespread, doxycycline may re-emerge as the treatment of choice for genital chlamydia infection in future.

Erythromycin is the recommended therapy in pregnancy, but compliance is sometimes difficult due to the side-effect profile. Although it is unlicensed, many clinicians prefer to prescribe azithromycin in this situation, because there is no evidence of harm to the baby.

Patients diagnosed with PID or epididymo-orchitis require treatment immediately, when the results of chlamydia investigations are unlikely to be available. The specific regimen used should be chosen according to the risk of gonococcal infection.20

Although a test of cure following treatment is not routinely recommended for all patients, those who are pregnant or who are on a second-line alternative regimen should be invited to retest to ensure cure.

Given the sensitivity of NAATs, this should be done no earlier than four weeks post-treatment, to ensure a resolving infection is not falsely classified as treatment failure or reinfection. This recommendation is based on limited data.17 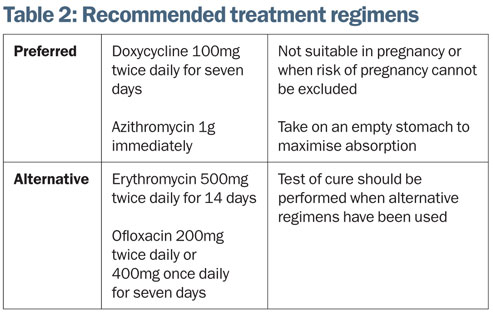 The natural history of genital chlamydia is not fully understood, but many patients report quick resolution of symptoms after treatment.

Infection in pregnancy is associated with premature rupture of the membranes and low birthweight.

Neonates are also susceptible to chlamydial conjunctivitis and pneumonia, with the risk of infection in neonates born to untreated mothers 50% and 20%, respectively.23,24

The risk of infertility is more difficult to quantify, especially if treatment has been given. Associations have been described between chlamydia and infertility, but most studies are retrospective.15 The relationship between infertility and PID is more robust. One review suggests that after a single episode of symptomatic PID of any cause, up to 18% of women may develop tubal factor infertility.15

A 24-year-old woman presented for a sexual health screen. She reported having a regular male partner for the past nine months and no other partners within that time.

She used the combined oral contraceptive pill to prevent pregnancy, but did not use condoms regularly. There were three other male partners before her current relationship.

Her previous sexual health screen, nine months ago, was negative. She had no genitourinary symptoms but her partner had encouraged her to be tested.

Her partner attended the clinic at a separate appointment. He reported dysuria and a mucoid discharge for approximately seven days. He confirmed that he had a regular female partner of nine months, but also admitted to unprotected vaginal sex with a casual female partner 12 days previously.

He was found to have urethritis but no gonococci on microscopy and was treated with antibiotics for a potential chlamydia infection.

His regular female partner was prescribed treatment, on an epidemiological basis. They were told to avoid sex for seven days and the importance of adherence to the regimen was emphasised. Both patients completed routine tests for chlamydia, gonorrhoea, HIV and syphilis and both tested positive for chlamydia. They were informed of the results by telephone and the male patient's casual partner was notified.

This trial investigates novel methods of partner notification (PN) and treatment in the UK.  Patients could choose if they wanted to use traditional methods of PN or a trial method: immediate treatment given at a pharmacy or arranged by telephoning a hotline.  The novel methods were more expensive but resulted in a higher percentage of partner treatment. The authors conclude this trial will be the basis of larger randomised studies of PN methods in future.

These studies examine the usefulness of self-collected vulvovaginal swabs.  Two large randomised studies conclude that home based self-collected swabs increased the rates of rescreening on women previously diagnosed with chlamydia.

Provides a summary of the evidence for the cost-effectiveness of chlamydia screening and recent data on the number of new diagnoses to date.

Advice on sexual history-taking and treatment in special populations is addressed. There is a specific chapter on chlamydia diagnoses and treatment.

A resource for patients explaining the risk factors for infection and the potential for asymptomatic disease, with links to local contraception and sexual health services.

Links to the most recent epidemiological data from GUM and community services, documenting changes in the prevalence of sexual infections over time in the UK.

14. Rönn MM, Ward H. The association between lymphogranuloma venereum and HIV among men who have sex with men: systematic review and meta-analysis. BMC Infect Dis 2011 Mar 18; 11: 70.

18. Schachter J, Chernesky MA, Willis DE et al. Vaginal swabs are the specimens of choice when screening for Chlamydia trachomatis and Neisseria gonorrhoeae: results from a multicenter evaluation of the APTIMA assays for both infections. Sex Transm Dis 2005; 32(12): 725-8.