Epidemiology
In 2013, breast cancer continued to be the most common female cancer and incidence is still rising.1

However, mortality from breast cancer is falling (see figure 1). Eighty per cent of women diagnosed are alive at five years. This may be a result of earlier diagnosis through screening,2 improved surgical and radiotherapy techniques, and more advanced adjuvant medical therapies. 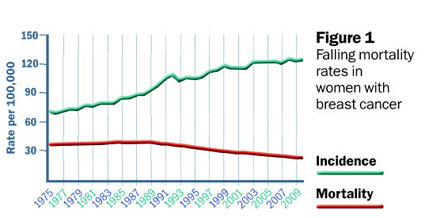 Factors known to increase a woman's chance of developing it include age (risk increases with age), family history (inherited genetic predisposition), previous radiotherapy to the chest wall, certain breast conditions (such as lobular neoplasia and multiple papillomatosis), early menarche, late menopause, later age at first full-term pregnancy and nulliparity (all related to exposure of higher levels of hormones for longer).

Risk factors include use of alcohol and tobacco,3,4 prolonged use of the oral contraceptive pill,5 HRT6 and obesity in postmenopausal women.7

Non-invasive cancer is commonly referred to as ductal carcinoma in situ, which is early breast cancer that has not invaded through the basement membrane of the ductal cell.

Molecular classification
The three major molecular subtypes are luminal-type (subtype A and B), HER2 amplified, and basal-like, and these all have distinctive biological and clinical features.9,10

Molecular tests are performed to provide more information on tumour biology and improve the accuracy of prognosis.

Most breast cancer presents in women aged 50 and above. Less than 2% presents in those aged below 35.11,12 It may be asymptomatic and only picked up on screening.

Male breast cancer is rare. About 350 men are diagnosed each year in the UK, compared with about 50,000 women.13 Presentation in men is similar to that in women.

Symptomatic cancer can present in multiple ways. Suspicions should be raised by a lump that is new or different, a new inversion of the nipple, bloody or blood-stained nipple discharge, skin changes such as dimpling, indentation or 'orange peel' skin, a new asymmetry of the breasts or lymphadenopathy at the axilla. Breast pain is rarely a symptom.

In the UK, population-based screening by mammography for those who are asymptomatic is offered to all women aged 47-73 years by the NHS Breast Screening Programme, with an 'opt-in' system after the age of 73.2 Those who are symptomatic are referred by the GP to local specialist breast units, under the two-week rule, for rapid assessment.

The diagnosis of breast cancer by triple assessment (clinical examination, radiological investigations with mammography, ultrasound or both, and pathological assessment with core biopsy) is well established in the context of multidisciplinary managementof the condition.14

The axilla is now routinely assessed at the same time. If suspicious lymph nodes are seen, a fine needle aspirate or core biopsy of the lymph node is usually performed to check for any metastases.

One-stop clinic
Many units run one-stop clinics, where all of these investigations are done in one sitting and results given on the same day. However, if a core biopsy is performed, there is usually a turnaround time of one week.

The diagnosis is based on the histopathological findings, along with correlation from radiological imaging.

MRI is not routinely used for the diagnosis of breast cancer, but it is used in selected cases to define tumour extent, especially in invasive lobular breast cancer.

MRI is used for detecting multifocal disease before surgery and to assess the contralateral breast. It is also a screening tool for high-risk patients.

CT scan, nuclear medicine bone scan and functional imaging with PET using fluorodeoxyglucose are accepted in the staging of many cancers, but not routinely used in the diagnosis of breast cancer.

The mainstay of treating breast cancer is multimodal. Surgery to the breast and axilla aims to excise the tumour to achieve clear margins of more than 1mm and to clinically stage the disease.

Mastectomy confers no survival benefit over breast-conserving surgery (BCS) with adjuvant radiotherapy.15 BCS should be the surgery of choice if complete tumour excision can be achieved with adequate margins and an acceptable cosmetic outcome.16

Neoadjuvant therapies are gaining in popularity, with the aim of reducing the tumour size to enable breast conservation.

Mastectomy may be recommended when BCS is impossible owing to tumour size, multifocal disease, or aesthetically unfavourable ratio of breast size to tumour volume, or at the patient's request.

This will help to guide further adjuvant therapies. In those with a confirmed clinically positive axilla, an axillary lymph node dissection will be performed at the time of breast surgery.

Postsurgical therapy in breast cancer is dictated by the pathology of the tumour and the lymph node status. It will often involve a combination of endocrine therapy, radiotherapy and/or chemotherapy, and is a multidisciplinary decision.

Those with hormone receptor-positive cancers will be offered adjuvant endocrine therapy. Tamoxifen is the drug of choice for premenopausal women or those who are intolerant to other forms of endocrine treatment. Postmenopausal women will receive an aromatase inhibitor, anastrazole.

Chemotherapy is often offered to patients who are hormone- insensitive ('triple negative' cancers), and those with large tumours or a heavy nodal burden.

The axilla
Controversies have arisen regarding patients with a positive sentinel lymph node biopsy and whether further axillary surgery is appropriate,18,19 because arm morbidity with lymphoedema is very debilitating.

Subtyping, HER2 status, new therapies
The molecular subtyping of breast cancer has led to further fine-tuning of adjuvant therapies. The HER2-positive breast cancer characterised by overexpression of HER2 with amplification of the HER2 gene has led to the use of the targeted monoclonal antibody trastuzumab, together with chemotherapy.

The newer monoclonal antibody pertuzumab may be combined with trastuzumab and chemotherapy and is often used to treat metastatic breast cancer.

The tyrosine kinase inhibitor lapatinib blocks the effects of HER2 and other proteins inside the tumour cells. It may be used in HER2-positive breast cancer that has progressed after treatment with trastuzumab.

Traditionally, most units follow up patients for five years with annual mammograms and clinical reviews. However, there is little benefit from routine clinical examination and most units now see patients up to one year postoperatively, then discharge them to annual mammographic surveillance for a further four years.23

Survival from breast cancer has improved dramatically in the past 20 years24 and 10-year survival is now 77%.25

Prognosis can be estimated using online web-based tools, such as Adjuvant! Online or PREDICT, which take into account various pathological factors and how likely adjuvant therapies are to be of benefit.

This provides information concerning 10-year risk of recurrence and the likelihood of benefit from chemotherapy.

Sarah is a 35-year-old woman who presents with a new area of nodularity in her upper right breast. There are no risk factors for breast cancer and she has no family history.

Traditionally, Sarah would have gone straight to surgery to remove a portion of breast tissue about 5cm in diameter to achieve disease clearance. At her age, with a tumour of this size, she would then have adjuvant chemotherapy and radiotherapy.

Current management would be to advocate a switch in the order of treatment and to deliver the chemotherapy first. The advantages of neoadjuvant chemotherapy are that it is likely to shrink the tumour mass, allowing a smaller breast volume to be removed after chemotherapy, and it allows time to test for the main breast cancer genes, BRCA1 and BRCA2, if the family history justifies this.

If Sarah is positive for one of these genes, the surgical discussion would centre on the benefits of bilateral mastectomy surgery, with or without immediate reconstruction.

If she tests negative for breast cancer genes (which is more likely), breast-conserving surgery is made much easier by a reduction in the volume of breast tissue removed.

Breast surgeons can adopt a number of oncoplastic techniques to move residual breast tissue to fill in defects and great attention is paid to minimising the long-term cosmetic impact on the breast.

Radiotherapy will be required after chemotherapy and surgery, usually for a period of three weeks to the breast itself, although intraoperative radiotherapy as a single dose is being used in some centres.

Following this, assuming the tumour is estrogen-receptor positive, adjuvant tamoxifen will be recommended at a dose of 20mg per day. This is generally well tolerated, although common side-effects include hot flushes, which are difficult to control.

Follow-up would be clinical at one year, with an examination and review of key issues, psychological support provided throughout by specialist breast and oncology cancer nursing teams and annual mammography.

Tamoxifen would be recommended for 10 years and annual mammograms continued until the age of 50.