Brain tumours are rare malignancies, accounting for approximately 2-3% of all tumours diagnosed in the UK in 2011 (including tumours of the spinal cord).

The incidence has a bimodal peak, with almost 25% of all cases being diagnosed in patients aged over 75 years and at the other end of the spectrum, CNS tumours accounting for approximately 25% of cancers diagnosed in children.1

The incidence of brain tumours has risen over the past decades; this is primarily thought to be because of advances in diagnostic imaging, along with improved tumour registries, rather than reflecting a true increase in incidence.

Brain tumours are heterogeneous and are classified by the cell of origin and the tumour grade (see table 1).2 Treatment depends on the tumour subtype, with standard treatment options including surveillance, surgery, radiotherapy and/or chemotherapy. 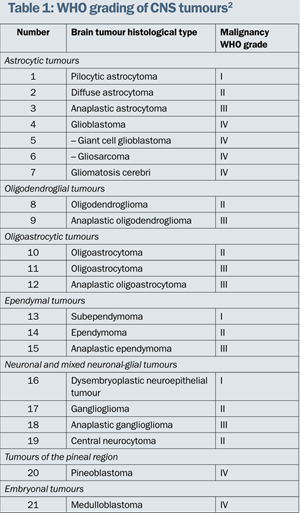 There are few established risk factors for the development of a brain tumour, other than prior ionising radiation.3

Smoking has been demonstrated to increase risk in some, but not all, studies.4 No particular diet (including level of alcohol intake) has been shown to affect brain tumour risk. Mobile phones have not been proven to cause brain tumours.5

There is evidence of a hormonal effect in the case of meningioma, with some studies showing an increased risk in women taking the oral contraceptive pill or HRT.6,7 Despite extensive work on the aetiology of brain tumours, the main causative incident has still to be identified.

Brain or spinal cord tumours represent a wide variety of tumour types, with differing behaviour and a variety of treatment modalities. This article focuses on management of glioblastoma, which has the greatest implications for primary care.

Making the initial diagnosis of a brain tumour can be difficult.

Primary tumour associated symptoms are mostly non-specific and can mimic those of benign causes. Confusion and altered cognition are common presenting symptoms for patients with glioblastoma. This symptom can be difficult to distinguish from other causes of confusion, particularly in elderly patients with confounding comorbidities.

A 'first fit' occurring in patients over the age of 50 years should always raise suspicion of an intracranial malignancy.

Other frequent neurological symptoms include those related to the tumour location, for example, paraplegia, dysphasia, visual impairment or personality changes. A full neurological examination is necessary, including an assessment of the patient's cognition, a deficit often disregarded as too non-specific.

Imaging
The cornerstone of establishing the correct diagnosis in brain tumours is imaging.

Patients are often initially diagnosed on emergency CT scans that identify an abnormality in the brain tissue (with or without associated oedema, bleeding or calcification).

However, the standard of care requires an MRI to characterise the extent and nature of the space- occupying lesion.

MRI also guides surgical planning, aiming to establish a pathological diagnosis, and helps to identify satellite lesions or gliosis - diffuse abnormality of a wider area of the brain.

Biopsy and histology
Histological diagnosis is mandatory in most patients with a suspected malignancy of the brain.

Biopsy only may be considered in tumours located in eloquent areas of the brain, but it has been shown that surgical debulking, ideally a macroscopic complete resection of visible disease on imaging, improves outcomes. Histology defines treatment and thus prognosis.

Further assessment of pathological tumour-specific markers helps to guide treatment and predict prognosis. Patients whose tumours harbour O(6)-methylguanine-DNA methyltransferase (MGMT) promoter methylation have an improved response to chemotherapy with an alkylating agent and derive greater benefit from the addition of chemotherapy to surgery and radiotherapy, compared with those who have unmethylated glioblastomas.8

Another prognostic marker is isocitrate dehydrogenase 1 and 2 (IDH1/2).9 Mutations in this gene give an indication that the tumour has most likely arisen in a lower-grade tumour which has undergone malignant change. Such tumours are referred to as secondary glioblastoma and carry a better prognosis than primary de novo glioblastoma.

Detailed assessment of the patient's clinical and neurological condition is required before treatment.

Corticosteroids are often given before surgery to help control acute tumour-related symptoms. Cognitive testing is essential at all stages as patients with substantial cognitive deficits have worse outcomes.

Current treatment
The most common tumour treated by (adult) neuro-oncologists in the UK is glioblastoma. Patients require intense input from a range of clinical services, including GPs and the primary care team.

One of the cornerstones in the treatment of patients with glioblastoma is surgery. Maximal safe debulking is the goal, aiming for a gross total macroscopic resection if clinically achievable.

In selected cases, this may be performed via awake craniotomy or with immunofluorescence such as 5-aminolevulinic acid, which accumulates in tumour cells and fluoresces in dark light, allowing easier identification of tumour tissue.10

Cortical mapping may be used to aid maximal resection with minimal risk to the patient of a permanent postoperative neurological deficit.

Surgical intervention allows the acquisition of tissue to establish the histopathological diagnosis and assessment of prognostic molecular markers (IDH1, MGMT).

Following surgery, patients are discussed by the site-specific multidisciplinary team, when further treatment strategy is defined.

The neuro-oncology team then assesses the patient, to consider non-surgical management. In patients with a good performance status (ECOG 0-2) under the age of 65-70 years, consideration is given to treatment with fractionated radiotherapy over six weeks, and concomitant and adjuvant chemotherapy according to NICE guidelines.11

Those for whom this may not be appropriate will be considered for a short course of palliative radiotherapy, or in some cases (those who are MGMT-methylated) for primary chemotherapy.12 Radical radiotherapy in combination with temozolomide chemotherapy, followed by adjuvant chemotherapy, was shown to improve median survival by 2.5 months (14.6 versus 12.1).13

In some cases, depending on the clinical circumstances and the patient's wishes, treatment may consist of best supportive care, led by the GP and the community palliative care team.

New developments
Despite many studies, no other chemotherapy agent has been shown to improve overall survival first-line in patients with glioblastoma.

One recent option is bevacizumab, a monoclonal antibody targeting vascular endothelial growth factor (VEGF).14 This is postulated to cause regression of tumour vasculature and to inhibit new and recurrent tumour vessel growth. It has been shown to improve the time to progression in patients with glioblastoma, but not overall survival.15

Bevacizumab is currently licensed in the US for treatment at relapse, but its appropriate place in the management of glioblastomas remains uncertain. Other trials of therapies targeting the VEGF/EGFR pathway have proved unsuccessful.16

A better understanding of the molecular changes underlying glioblastoma has led to their classification into proneural, mesenchymal and proliferative subtypes.17

It is known there are abnormalities along multiple pathways of the cell cycle in such tumours. Current phase 1 studies target the PI3K pathway, among others. The role of poly (ADP-ribose) polymerase inhibition is also under investigation.

Recent successes in immune checkpoint modulation in other solid tumours have sparked an interest in such therapies in glioblastoma; several studies are investigating the role of PD-1 and CTLA-4 inhibition.

The prognosis for patients with glioblastoma depends on several factors that have been grouped into a recursive partitioning analysis (RPA).

RPA is a means of grouping patients in prognostic distinct groups according to clinical factors including age, neurological function and degree of surgical resection (see table 2).18 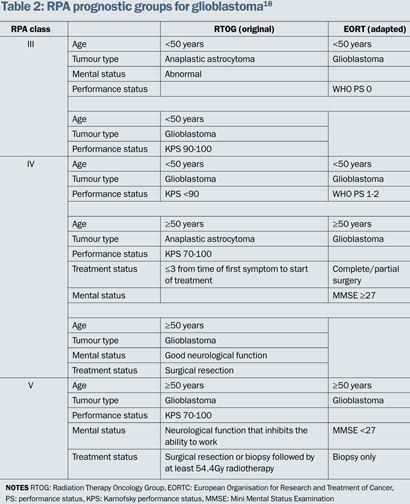 Follow-up should be managed in the multidisciplinary setting, with close links to primary care. Regular imaging may be performed on an outpatient basis if further treatment is considered in recurrent disease. The input of local rehabilitation services is vital in patients with focal deficits, to preserve remaining function.

Judith is a 32-year-old woman who presented to A&E in July 2013 with severe frontotemporal headache, vomiting and slurred speech.

Her headaches had begun two months before admission, but had worsened over the previous three weeks.

A CT scan of her brain demonstrated a right temporoparietal mass, with evidence of midline shift.

An MRI of her brain confirmed the presence of an isolated lesion and Judith later underwent a right temporal craniotomy with maximum tumour removal.

Histological examination confirmed it to be consistent with a glioblastoma (WHO grade IV). The tumour was MGMT-methylated and IDH mutation-negative. Postoperative MRI showed macroscopic complete resection of the contrast-enhancing tumour elements.

Judith commenced a six-week course of radiotherapy with concomitant temozolomide chemotherapy. She tolerated the treatment well and in November 2013, began six cycles of adjuvant temozolomide.

Following completion of adjuvant chemotherapy, a follow-up MRI scan in May 2014 showed no evidence of tumour. Judith preserves her excellent performance status and has returned to work. She continues to be monitored with repeat scans to detect early disease progression.