Rate control versus rhythm control in the management of AF. By cardiologist Dr Andrew Money-Kyrle

Atrial fibrillation (AF) is the most common sustained cardiac arrhythmia, affecting 2% of the population and more than 10% of people aged over 80 years in the UK.

Apart from causing symptoms such as breathlessness and palpitations, the main significance of AF is its association with an approximately fivefold increased thromboembolic stroke risk.

Appropriate anticoagulation in all patients would prevent an estimated 4,500 strokes and 3,000 deaths per year in the UK.

AF may be defined as a loss of co-ordinated atrial electrical activity with consequential loss of atrial mechanical activity.

Irregular depolarisation through the AV node results in intermittent depolarisation of the ventricles and the classical 'irregularly irregular' pulse.

Aetiology
The aetiology of AF is multifactorial, although in some cases no particular factor is identified (lone AF).

Apart from the increasing incidence with age, the most important identified triggers and associations are:

AF is classified as:

Atrial flutter
Atrial flutter occurs when a re-entrant pathway within the atria results in rapid atrial conduction, which is usually at the level of around 300 beats per minute (bpm).

Conduction through the AV node is usually found to be in a ratio of 2:1 (giving a ventricular rate of 150 bpm) or slower.

Atrial flutter is closely related to AF in terms of its associated stroke risk and its general management.

A third of patients with AF will not present with any symptoms. Presentations of symptoms most commonly include tiredness, irregular palpitations and exertional breathlessness.

Even if an irregular pulse is picked up on examination, the diagnosis can only be confirmed with an ECG. This will show the absence of P waves with a rather irregular isoelectric line (fibrillation waves) and irregular QRS complexes.

Atrial flutter may superficially look similar to sinus tachycardia, but the regular rate of 150 and 'flutter waves' (a saw-toothed appearance of the baseline) in the inferior leads should suggest the diagnosis.

In cases of fast AF or atrial flutter which can be ambiguous or difficult to interpret, vagal manoeuvres while acquiring an ECG or rhythm strip can sometimes reveal underlying atrial activity by slowing AV nodal conduction.

Other clinical features may include a mismatch between apical and radial rates (the latter being reduced because some faster AF beats have a low pulse pressure and are impalpable).

There may be signs of valvular heart disease (especially mitral valve disease) and heart failure, sepsis or thyrotoxicosis. Any triggers for AF, such as thyrotoxicosis, chest infection or alcohol intake, should be addressed.

BP reading with automated devices may be inaccurate and manual assessment is recommended.

Rate control
Patients who present with breathlessness, palpitations or chest tightness often have poor ventricular rate control, usually too fast at rest or exercise. Fast rates may be controlled with beta-blockers, rate-limiting calcium antagonists or digoxin.

Combinations of drugs are frequently required to keep the heart rate between 60 and 100 bpm. Digoxin on its own may be effective at controlling the rate at rest,but not during exercise.

Patients presenting with fast AF for the first time may have heart failure, so diuretics and ACE inhibitors may be required as well as rate-limiting drugs. Slow AF may require pacing.

A rate control strategy without efforts to restore SR may be optimal in asymptomatic patients. There appears to be little difference in outcome for mortality and stroke prevention between rate and rhythm control.

Rhythm control
Patients who are symptomatic or those presenting for the first time without structural heart disease may be suitable for a rhythm control strategy. This may include DC cardioversion (DCCV), chemical cardioversion or electrophysiological or surgical ablation techniques.

Attempts to restore SR are most likely to succeed if patients are taking a suitable antiarrhythmic, such as a beta-blocker, flecainide or amiodarone, have normal-sized atria and have been in AF for less than a year. Without antiarrhythmics, most patients revert to AF within a few weeks.

Patients who may have been in AF for some time can be offered DCCV but should be anticoagulated for a minimum of three weeks before DCCV and for four weeks afterwards. Continuation of OAC will depend on the patient's future risk of stroke, best estimated using their CHADS2 or CHADS2-VASc score. Patients who have been restored to SR with a high future stroke risk should continue with OAC in the absence of contraindications. 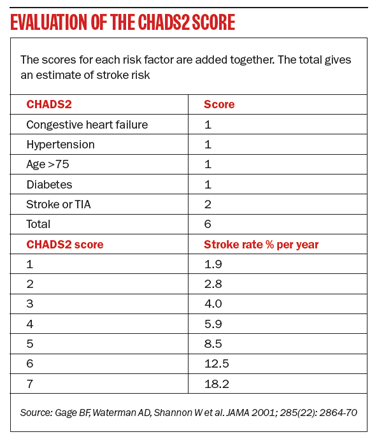 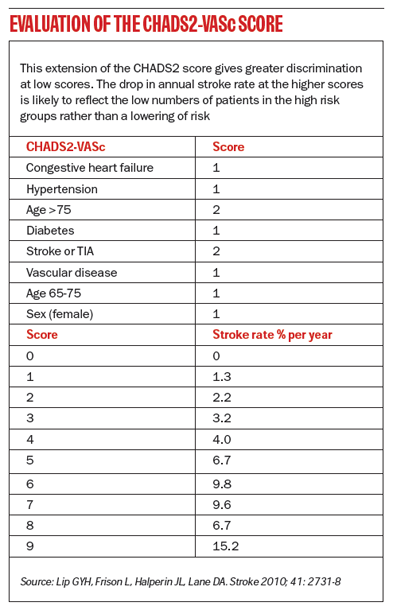 They should also be anticoagulated for a minimum of four weeks, or indefinitely if their CHADS2 score is high.

Amiodarone can be used to cardiovert and maintain SR in patients with AF. This is an effective antiarrhythmic, but potential side-effects have limited its use. For this reason, it is rarely used first line.

Flecainide is useful for cardioverting and maintaining SR in patients with good LV function who are known not to have coronary disease or are deemed to be in a low-risk category for cornoary artery disease. Suitable patients with intermittent symptomatic paroxysmal AF may use flecainide to take as and when their symptoms arise.

The European Society of Cardiology (ESC) recommends that patients with a CHADS2 or CHADS2-VASc score of zero do not need OAC or antiplatelets. OAC should be considered for patients with AF with one or more risk factors for stroke in the absence of contraindications (CHADS2 score of one or more). 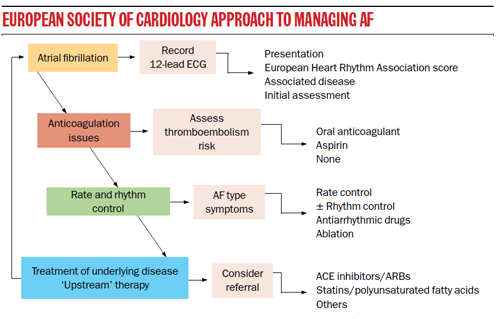 There is some debate about whether antiplatelets still have a place in the routine management of AF. NICE has stopped recommending aspirin for low-risk groups, but the ESC guidelines indicate that it may be considered rather than OAC in patients with one 'clinically relevant non-major' risk factor (for example, female patients aged <65).

Antiplatelets also continue to be used in patients in higher cardiovascular risk groups who are thought unsuitable for OAC. In deciding whether to start OAC, consideration should be given to the patient's bleeding risk.

New developments
The Xa inhibitors dabigatran, apixaban and rivaroxaban may now be considered. NICE recommends dabigatran as an 'option for the prevention of stroke and systemic embolism' with one or more of the following risk factors:

Dabigatran is contraindicated in severe renal impairment (eGFR <30ml/min), active bleeding and hepatic impairment. The MHRA recommends renal function assessment before starting dabigatran, when a decline in renal function is suspected during treatment and annually in patients aged over 75 years or with renal impairment. Rivaroxaban has had a NICE appraisal for similar indications and was deemed cost-effective in patients who had poor INR control on warfarin.

The prognosis for patients with AF depends on the presence of other risk factors, such as age, coronary disease, hypertension and diabetes.

Patients without risk factors who are aged under 60 years (lone AF) have a good prognosis, with a stroke risk of only 1.3% over 15 years.

Patients with a CHADS2 score of six have an annual stroke risk of 18.2% without anticoagulation.

NICE has suggested that patients with a CHADS2 score of zero do not need to be anti-coagulated or to have antiplatelets. The NICE assessment of current practice is that aspirin is only used in those patients for whom warfarin is unsuitable.

Follow-up
Patients who are managed with both rate and rhythm control strategies should be followed up occasionally.

Common problems include the development of heart failure, rate control, anticoagulation problems and sometimes monitoring of drugs such as amiodarone.

The rate may be too fast at times of activity and not necessarily at rest, leading to exertional breathlessness. Screening for this may require 24-hour ECG monitoring.

A 76-year-old woman presents to her GP with exertional breathlessness and tiredness.

She has noticed intermittent palpitations, mostly at night but also with some activities such as climbing stairs.

She is a type 2 diabetic with hypertension, with no history of vascular disease or previous stroke. She normally takes ramipril 5mg, metformin, aspirin 75mg and simvastatin 40mg.

Examination reveals an irregularly irregular pulse, approximately 70 on palpation and 95 on auscultation.

You hear no murmurs and there are no overt signs of heart failure. The ECG confirms AF with a rate of 105 and no acute changes. Her thyroid and kidney function are normal.

Her CHADS2-VASc score is five, giving an annual risk of stroke of 6.5% per year.

In the absence of contraindications, anticoagulation is recommended. Her HAS-BLED score is two, giving an annual bleeding risk of 1.88%.

You arrange for her to start warfarin (stopping her aspirin) and initially control the ventricular rate with a combination of digoxin 125 microgram and bisoprolol 2.5mg.

She continues to feel unwell and is referred to cardiology.

The cardiologist recommends increasing the bisoprolol to 5mg and arranges a DC cardioversion, which restores SR for seven months (the patient stops her digoxin but remains on warfarin and bisoprolol).

She reverts to AF and reports palpitations, breathlessness on exertion and intermittent dizziness. Ultimately, she is referred to an electrophysiologist who recommends AV nodal ablation and a pacemaker.

The procedure is successful. The patient remains on warfarin, ramipril and her diabetic medications, but finds benefit from furosemide 40mg. She remains active, with a good quality of life. 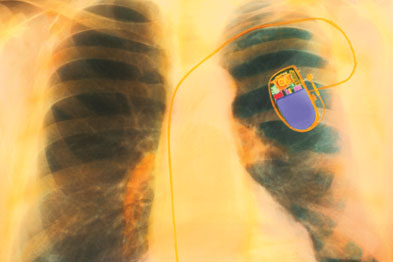 Patients fitted with a pacemaker can achieve a good quality of life (Photograph: SPL)

A good summary, but does not deal with more recent developments such as CHADS2 and new anticoagulants.

Recommendations for use of the first Xa inhibitors in the UK.

The ESC guidelines are more recent than those published by NICE and give an excellent summary of the current management of AF.