Section 1: Epidemiology and aetiology
Appendicitis is defined as inflammation of the appendix. This condition is common, yet notoriously difficult to diagnose. This diagnosis can be associated with a variety of severe consequences and should be regarded as a clinical emergency.

The appendix is a blind-ending luminal structure that arises from the caecum. The average length of the appendix is 8-10cm. Several lymphoid follicles are scattered in its mucosa. These follicles increase in number between eight and 20 years of age.

The intra-abdominal position of the appendix varies from the right upper quadrant to the suprapubic region, which explains the different ways in which the condition presents. The appendix is most classically found in the right iliac fossa (RIF) and is retroperitoneal in two-thirds of patients.

Another common cause is lymphoid hyperplasia. This is associated with various disorders including Crohn's disease, gastroenteritis, amoebiasis, measles, mononucleosis and many other viral illnesses. For this reason, it is a particularly common cause of appendicitis in childhood.

Another significant cause of appendicitis in the older age groups is neoplastic processes around the base of the appendix, causing obstruction. Less common causes include bacteria (including yersinia and histoplasma), parasites (such as schistosome species and pinworms) and TB.

Congenital disorders of appendix anatomy are extremely rare but are occasionally reported as causing appendicitis.

Whatever the cause of the obstruction to the appendiceal lumen, the result is an increase in luminal pressure due to continued secretion of fluids from the appendix mucosa and the stagnation of faecal material and bacterial overgrowth. This leads to an influx of white blood cells and the formation of pus.

If this process continues, the increase in pressure impairs venous drainage from the appendix and ultimately causes appendicular artery thrombosis. The consequent ischaemia allows bacteria to breach the epithelial barrier and invade the appendiceal wall.

If not treated, this process can lead to perforation of the appendix. This can cause the passage of pus and/or faecal matter in the peritoneal cavity.

Localised or generalised peritonitis, abscess formation or systemic sepsis may complicate appendicitis. These consequences carry significant morbidity and this condition can be fatal, even in previously healthy individuals.1

Section 2: Making the diagnosis
No single sign, symptom or diagnostic test accurately confirms the diagnosis of appendicitis. The clinical presentation is classically described as a central abdominal pain that migrates and settles in the RIF and is associated with nausea, anorexia and low-grade pyrexia.

However, this classical presentation occurs in only 50 per cent of patients. The presence of anorexia is a good positive predictive marker (80 to 90 per cent) but a poor negative predictor of appendicitis (less than 20 per cent).2 Other symptoms that help build a diagnostic picture include vomiting, loose stools and urinary symptoms.

Tenderness in the RIF is almost universally present but is not a specific finding. This may be associated with rebound tenderness or guarding. Rovsing's sign is another non-specific finding. Findings on rectal and vaginal examination may be normal, although tenderness to the right may be present in a pelvic appendicitis.

Diagnosis
A number of scoring systems intended to predict or exclude appendicitis have been trialled but none is used routinely.

This is because the key to making the diagnosis is to combine a compatible history and supportive examination findings with the clinical likelihood of other diagnoses. It is important to note that patients at the extremes of age can present diagnostic difficulty because of non-specific presentation and signs. Appendicitis during pregnancy also presents a diagnostic challenge due to positional changes in the abdomen.

Investigations
In women of childbearing age with abdominal pain, a pregnancy test is a mandatory investigation to exclude ectopic pregnancy. Blood tests are useful if there is diagnostic uncertainty.

Both WCC and CRP assays have a reasonable positive predictive value for this diagnosis3 but the true negative predictive value is a matter of debate and seems to depend on the duration of symptoms. As such, results should be interpreted with the clinical picture in mind.4

Ultrasound is reserved for cases associated with diagnostic uncertainty. In situations where the more likely differential diagnosis is bowel pathology, a CT scan may be more appropriate. This is particularly important in excluding neoplastic processes in the elderly.

In the presentation of non-specific abdominal pain, particularly in the lower abdomen, laparoscopy should be considered as an investigation. This offers the opportunity to proceed to a therapeutic procedure.

Section 3: Managing the condition
Patients with a suspected appendicitis in primary care should be referred for same day surgical review.

There is a role for repeated assessment in primary care (not exceeding 48 hours) in patients who do not have signs of systemic upset (tachycardia, pyrexia, excessive pain or general or localised peritonism). 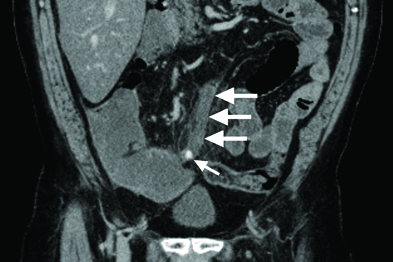 Surgical treatment
Appendectomy has been the treatment of choice in patients with appendicitis for more than 120 years.

A recent meta-analysis of antibiotic therapy versus appendectomy for presumed appendicitis has confirmed that surgery remains the most appropriate treatment in the majority of cases, due to the risk of recurrence (10 to 15 per cent at one year) and the need to cross over to surgical management in about 30 per cent of cases.5

There is still a role for antibiotic therapy in selected patients who do not have access to surgery, or who have excessive operative risk or abscess formation. However, it is important to note that it is inappropriate to begin treatment with antibiotics for appendicitis in primary care.

Appendectomy can be performed as an open or a laparoscopic procedure. Although there is some debate about the relative benefits of these procedures, the only significant difference between the two seems to be higher quality of life scores at two weeks, which have been observed in the laparoscopic group.6

The surgeon's choice of the approach to surgery is influenced by diagnostic certainty (in women, it is possible to examine the reproductive organs during laparoscopy), the size of the abdomen (it is difficult to triangulate laparoscopic instruments in small children), obesity and the surgeon's technical skills.

The complications that are associated with appendectomy, appendicitis and the pathological process are listed in the box below.

Section 4: Prognosis
The prognosis of acute appendicitis is dependent on the presence of complications. The risk of complication is linked to the duration of symptoms before treatment (including delay to presentation, referral and treatment).

Postoperative wound infections account for almost one-third of the morbidity associated with appendicitis. Pelvic collections are another common cause of prolonged length of stay in hospital and readmission.

The mortality risk of acute but not gangrenous appendicitis is less than 0.1 per cent, but the risk rises to 0.5 per cent in gangrenous and perforated appendicitis. Mortality is associated with diagnostic delay. In uncomplicated cases of appendicitis that have been treated operatively, there is no need for routine follow-up.

Patients who have had a complicated postoperative course will require a tailor-made plan for follow-up that is likely to combine primary and secondary care.

Section 5: Case study
A 65-year-old woman presented to her GP with a 12-hour history of vague central abdominal pain associated with nausea and anorexia.

On examination, her GP noted mild tenderness in the RIF. Normal temperature and urine dip were recorded. The GP asked the patient to return six hours later for review. At the time of review, the patient reported that her symptoms were unchanged. She was noted to have a temperature of 37.6°C. The GP arranged a review in the local hospital that evening.

Four hours later, she was assessed by the surgical registrar, when she complained that the car journey to the hospital was uncomfortable when driving over speed bumps and that she had not eaten all day. At this time, she reported that her pain was in the RIF.

On direct questioning, she said she had some weight loss in the past three months, but denied any change in her bowel habit. On examination, she was noted to have RIF tenderness but no signs of peritonism and no palpable mass. Her temperature was 37.8°C. Blood tests revealed mildly elevated inflammatory markers and a mild anaemia.

Investigations
The admitting surgeon believed that the likely diagnosis was an acute appendicitis, but she was concerned that due to the patient's age, history of weight loss and anaemia, this might be associated with a colon malignancy. A CT scan was arranged for the following morning and the decision was made not to operate overnight unless the patient's clinical condition deteriorated.

The CT revealed an inflammatory process in the RIF that was consistent with appendicitis (with no evidence of perforation or collection). In addition, there was some radiological concern over the presence of a caecal mass. There was no evidence of other intra-abdominal pathology and the liver was unremarkable.

The probable diagnosis of appendicitis and a colon mass was explained to the patient. The patient consented to an appendectomy and bowel resection if needed. A diagnostic laparoscopy confirmed the radiological findings in the caecum and appendix. A right hemicolectomy was performed.

The patient's recovery was uncomplicated and she was discharged on the third postoperative day. Histological analysis revealed a low-grade adenocarcinoma with two positive lymph nodes and clear resection margins. The patient was referred to an oncologist for consideration for chemotherapy and underwent a CT of the chest for staging. 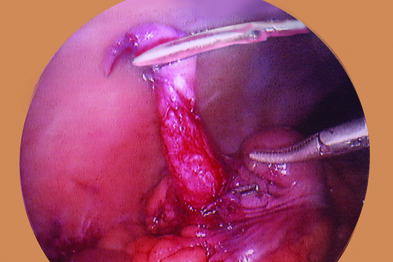 Appendectomy is the treatment of choice for appendicitis (Photograph: Chris Bjornberg/Science Photo Library)

Curriculum
This topic is covered in the GP curriculum in statement 15.2 Digestive Problems.

Online
NHS choices offers good patient information, including an animation of the causes and treatment of appendicitis.

KidsHealth has good patient information for parents and children.

REFERENCES
1. The 2002 National Confidential Enquiry into Patient Outcome and Death.

NHS England has promised £30m for general practice to improve diagnosis and care...

Second doses of COVID-19 vaccines in England will be 'accelerated' for all over-40s...

The BMA is supporting legal action over alleged negligence and under the Human Rights...

GPs are among those who have been recognised in the Queen's birthday honours.

The healthcare crisis in Myanmar - how UK GPs can help

Dr Jim Brockbank from Myanmar UK GP Health Action provides an update on how the military...