Section 1: Epidemiology and aetiology
Acromegaly is a slowly progressing condition which results from persistent high secretion of growth hormone (GH) by a growth hormone-producing pituitary tumour.1

The term acromegaly is derived from the Greek words 'akron', meaning extremity, and 'megas' meaning great.

The most characteristic feature of acromegaly is the enlargement of the hands and feet. Gigantism, which is the juvenile counterpart, is also caused by a GH-secreting pituitary tumour, but it causes excessive growth before epiphyseal fusion.

It occurs less frequently than acromegaly because pituitary tumours in children are much less common than in adults. The symptoms have been observed as early as the first six to nine months of age.

Acromegaly can occur at any time but most cases are diagnosed at 40 to 60 years of age with a peak age of 44 years. Larger, more aggressive tumours secreting GH tend to be present in younger patients and also patients with family history of pituitary adenomas present at an earlier age.

There is a delay in diagnosis of acromegaly of about six years after the increase in GH secretion. Acromegaly occurs in all races and has equal sex distribution.

Somatotroph cells that produce GH are located in the postero-lateral region of the pituitary gland. One third of patients with pituitary tumours may have mixed GH and prolactin (PRL) secreting adenomas.

Carcinoma of pituitary secreting GH has been described but is very rare.1

Acromegaly can occur as part of a genetic condition due to Carney complex; familial isolated pituitary adenoma (FIPA); multiple endocrine neoplasia type I or McCune-Albright syndrome.

Section 2: Making the diagnosis
The pathological effects of increased GH secretion tend to progress slowly and insidiously over a long period of time allowing the effects to go unnoticed by the patient and also others, including physicians and family members.

Clinical features
Patients may initially present with a variety of clinical symptoms and signs, such as headache, sweating, joint pain, arthritis, carpel tunnel syndrome or sleep apnoea, which are also common in the general population.1,4 For these reasons, there is a delay of many years after the increase in GH secretion in diagnosis of acromegaly.

Excess GH stimulates increased hepatic secretion of insulin-like growth factor-1 (IGF-1), which causes most of the clinical manifestations of acromegaly, such as acral and soft tissue overgrowth in almost all adult patients.

The somatic effects include stimulation of growth of many tissues, such as skin, connective tissue, cartilage, bone, viscera, and many epithelial tissues. The metabolic effects include insulin antagonism and lipolysis. The most noticeable feature is usually a change in facial appearance with enlarged supra orbital ridges, a wide nose and prognathism.

It can be useful to see old photos. In addition, the pituitary adenoma may cause local symptoms, such as headache and visual field defects.

Diagnosis
A degree of suspicion of acromegaly is required when certain conditions are diagnosed (see table, below). Elevated GH levels and IGF-1 levels matched to age and sex suggest the diagnosis of acromegaly.

Once the hypersecretion of GH is confirmed, an MRI scan of the pituitary is performed to localise the lesion, because pituitary adenoma is the commonest cause of acromegaly.

Further investigations include assessment of remaining pituitary function tests and also assessing for any complications mentioned in the table (below). Routine measurements at baseline include glucose, calcium, visual fields, echocardiogram and colonoscopy.

Section 3: Managing the condition
The ideal treatment would be the one that renders GH secretion to normal, completely ablates the pituitary tumour mass, while preserving normal pituitary function resulting in complete reversal of complications of GH excess.

However, there is currently no available treatment that effectively fulfils all these criteria. Therefore the aim of treatment is to reduce mortality by reducing GH and IGF-1 values to normal levels by complete removal or at least debulking the tumour mass and also the treating comorbidities.

Surgery offers the chance of a cure if the pituitary adenoma is completely removed and is the first line of treatment unless contraindicated. Surgical resection of GH secreting pituitary adenoma is usually via the minimally invasive endonasal transsphenoidal route and is curative in 70 to 90% of microadenomas (less than 10mm in diameter but only 40 to 50% of macroadenomas.

The most common complication is hypopituitarism, which occurs in 12 to 18 per cent of patients undergoing surgery. 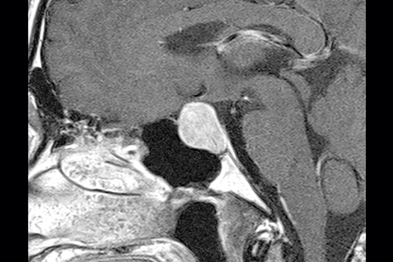 Drug treatment
Medical treatment with somatosatatin analogues (SSA) is initiated if surgery fails to bring the GH and IGF-1 to safe levels. These drugs are given as injections once a month. They inhibit secretion of GH from the GH-secreting cells similar to somatostatin, although with a much longer duration of action than the parent compound and without any rebound hypersecretion of GH or other hormone secretions following cessation of their action.

These drugs are generally well tolerated. The common side-effects include GI disturbances and symptoms usually resolve as the treatment progresses.

Gallstones can develop in up to 20 per cent of patients, usually in the first six months of starting the SSA. These do not usually require the patient to discontinue treatment, except in the small percentage of people who experience inflammation of the gallbladder.

Due to insufficient safety data on the use of these drugs during pregnancy, women are advised to stop these medications when pregnant.

Radiotherapy is generally reserved as the third-line treatment, but this is a slow process and can take many years to normalise GH and IGF-1.

Hypopituitarism is observed in more than 50 per cent of patients receiving radiation therapy.

The comorbidities, such as cardiac dysfunction, diabetes mellitus, osteoarthropathy and obstructive sleep apnoea, that are associated with acromegaly can lead to functional disability.

In some patients biochemical control/remission of acromegaly may reverse or halt progression of these comorbidities, but a proportion will need additional management needing multidisciplinary input.

Patients who develop hypopituitarism as a complication of acromegaly or following its treatment as described above may require lifelong pituitary hormone replacement therapy.

Section 4: Prognosis
Pituitary adenomas causing acromegaly are usually benign, but elevated GH and IGF-1 levels lead to a wide range of cardiovascular, respiratory, endocrine and metabolic complications leading to increased mortality. Patients who achieve a biochemical cure following surgery may need to be followed up annually with a random GH and IGF-1 for life for any recurrence and also for complications of treatment. Those who are not cured with surgery and/or radiotherapy and need medications to control GH require closer follow up depending on the clinical needs.

Causes of mortality
The main causes of mortality are cardiovascular, cerebrovascular and respiratory diseases. A recent meta-analysis found the weighted mean of the standardised mortality ratio from 16 published studies of patients with acromegaly was 1.72 (95 per cent CI, 1.62-1.83).7

There is a 72 per cent increased risk for all-cause mortality in patients with acromegaly. However, there is improved survival in recent studies, presumably due to modern treatment modalities and more strictly defined cure criteria.7

Reports suggest that overall mortality in patients with acromegaly is correlated with the degree of GH control.

A random serum GH less than 2.5 micrograms measured by radioimmunoassay and normal serum igf-1 values would restore the elevated mortality risk to levels.8

Section 5: Case study
A 48-year-old man, known to have hypertension, was referred to the endocrinology clinic with a history of poor libido and erections, and a six-month history of worsening headache and visual impairment.

He also had a long-standing history of sweating, greasy skin and an increase in shoe and ring size.

His symptoms had deteriorated over the previous six months and he had also had to stop wearing his wedding ring. He denied any other systemic symptoms.

On examination he had thick greasy skin, large doughy hands, large nose, prognathism, prominent supra-orbital margins apart from high BP and glycosuria. In view of his clinical features a diagnosis of acromegaly was suspected.

IGF-1 and GH were measured along with the routine biochemistry, glucose and remaining pituitary function tests. As IGF-1 was elevated further investigations such as OGTT was performed to confirm the diagnosis and MRI scan of the pituitary was arranged to localise the lesion after confirming the diagnosis of acromegaly.

This gentleman was confirmed to have acromegaly with associated complications of hypogonadism, diabetes mellitus and optic chiasm compression by the pituitary mass.

Treatment
He was seen by the neurosurgeons and surgery (transspenoidal route) was performed to remove the pituitary adenoma. He had no perioperative complications. Histology confirmed the somatotroph GH secreting adenoma.

At three months postoperatively he was doing well and had noticed significant reduction in soft tissue swelling.

His libido and erections had improved. He was still diabetic and was managed on metformin. MRI of the pituitary showed a possible small residual tissue, but his random GH was 0.1 microgram/L and IGF-1 was in the normal range confirming him to be in remission. He was put on active monitoring.

His remaining pituitary function tests and visual fields were with in normal limits.

This is a review of the largest studies of somatostatins, subcutaneous octreotide, octreotide long-acting formulation (LAR), and slow releasing (SR) lanreotide, which included biochemical end-point data for lanreotide autogel (ATG), and also studies that directly compared the efficacy of octreotide LAR and lanreotide SR.

It concluded that lanreotide ATG and octreotide LAR are equivalent in the control of symptoms.

The outcome of this study was that pegvisomant monotherapy and adjunctive therapy are viable options for the treatment of patients with acromegaly who are suboptimally controlled on long-acting octreotide.

5. Arafat AM, Mahlig M, Weickert MO. Growth hormone response during oral glucose tolerance test: the impact of assay method on the estimation of reference values in patients with acromegaly and in healthy controls, and the role of gender, age, and body mass index. J Clin Endocrinol Metab 2008; 93: 1254-62.

Fitness to practise and revalidation to continue despite pandemic, GMC confirms

Revalidation and ongoing fitness to practise cases will continue despite huge pressure...

IRIS is an evidence-based programme designed to reach female survivors of domestic...

Loss of taste and smell and neurological aspects of 'long COVID' infection will be...

COVID-19 vaccine stocks must not be diverted to large sites ahead of local GPs, warns BMA

The government must ‘ramp up’ COVID vaccine supplies to general practice and avoid...