Acne vulgaris is a chronic inflammatory disease of the pilosebaceous unit. It is characterised by seborrhoea, non-inflammatory and inflammatory lesions, and scarring.

Almost all teenagers can expect some degree of acne, with moderate to severe disease in about 15% of 15- to 17-year-olds.1 Acne develops earlier in girls, but more boys are affected. Late-onset acne (>25 years) is seen in 8% of patients and significant lesions are seen in 1% of men and 5% of women at the age of 40.2

Aetiology
Genetic factors play a part. There is a high concordance between monozygotic twins and a greater risk of severity is associated with a positive family history, maternal acne being associated with the greatest risk.1,3

Acne is associated with increased insulin resistance and high serum dehydroepiandrosterone, which may explain its association with polycystic ovary syndrome (PCOS).

Factors that can cause acne to flare include menstruation, emotional stress, picking and smoking.4

Antiepileptic drugs are associated with a monomorphic acneiform rash and it has been suggested the severity of the acneiform eruption produced by the chemotherapy drug erlotinib may correlate with increased survival.5

There is limited evidence to support the belief that diet affects acne. Anecdotally, sunlight can improve acne and UVB phototherapy is occasionally used to treat it.

Other less common forms of acne are shown in table 1. 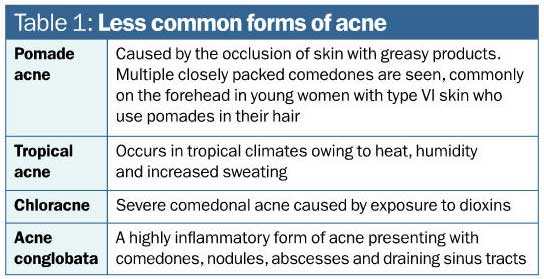 Acne is a clinical diagnosis. The distribution corresponds to areas with the densest population of pilosebaceous units, such as the face (99%).

Comedones may be open (blackheads) or closed (whiteheads) and show no clinical inflammation.

Inflammatory lesions may be superficial (papules or pustules) or deep (pustules or nodules) and are raised erythematous lesions.

Nodulocystic acne is a severe form consisting of comedones, inflammatory lesions and large nodules, with a high risk of scarring.

Scarring may occur with superficial or deep lesions in scar-prone patients and may be described as ice-pick, depressed fibrotic, atrophic, hypertrophic or keloidal. Deeply pigmented skin is more susceptible to persistent postinflammatory hyperpigmentation.

When to carry out further investigations 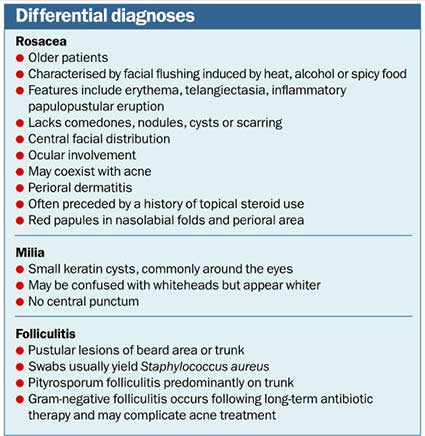 The treatment of acne is based on disease severity, extent and patient factors (see table 2).

Most commonly, combination treatments are used to address the comedonal and inflammatory components of the disease.

Available as gels and creams, they should be applied once or twice daily. They are recommended first-line for maintenance and can be continued indefinitely and combined with topical antibiotics or benzoyl peroxide (BPO). All retinoids are contraindicated in pregnancy.

BPO, a non-antibiotic antimicrobial agent, can be used on its own or in combination for mild acne. BPO (2.5-5% strength) should be started at a low frequency (such as three times a week) and titrated up to daily use, to reduce irritation.

Topical antibiotics, such as clindamycin and erythromycin, are commonly used, but monotherapy should be avoided to prevent resistance. They should be combined with BPO or a retinoid for best results.

Topical azelaic acid can be used alone or with a topical retinoid for mild papulopustular disease.

Moderate acne
The key to success in moderate acne is to combine treatments to treat both the comedonal and the inflammatory components.

A typical combination is an oral antibiotic with a topical retinoid and BPO. Tetracyclines are usually used first-line, in particular lymecycline and doxycycline, both of which offer the added convenience of once-daily dosing.

Minocycline is best avoided because it has a higher incidence of adverse effects compared with other tetracyclines.6 Oral erythromycin (500mg twice daily) or trimethoprim (300mg twice daily) are useful alternatives. Resistance to oral antibiotics can be minimised by using topical BPO concurrently.

In young women requiring contraception or with features of PCOS, an anti-androgenic combined oral contraceptive is recommended as part of combination therapy (either with or without an oral antibiotic), along with a topical agent.

In older women, or if estrogens need to be avoided, spironolactone is an alternative when used with contraception.7

Severe acne
In patients with severe acne, oral isotretinoin is most effective, inducing long-term remission in about 90% of cases.8 Isotretinoin significantly reduces sebum production, prevents comedone formation, reduces P acnes colonisation and is anti-inflammatory. It is usually prescribed in secondary care, owing to its side-effects and teratogenicity. Women of childbearing age must use contraception during and for at least a month after treatment. 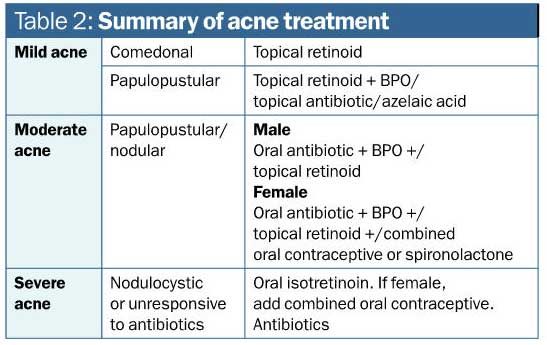 Most patients can be managed in primary care. The treatment combinations should be tried for approximately three months and their effect then assessed. Effective treatment should be continued for six months, then re-evaluated.

Patients with nodulocystic acne should be referred to secondary care for consideration of oral isotretinoin and commenced on oral antibiotic treatment in the meantime. NICE has further recommendations about referral (see section 6).

Scarring can be more disabling than the acne itself. The best way to reduce scarring is to treat the acne early and to continue therapy for as long as necessary.

A 12-year-old girl was brought in by her mother, who was worried that 'teenage spots' were making her daughter self-conscious and affecting her confidence.

The patient had used OTC preparations containing BPO, but with no improvement. She had no other medical conditions and had not yet reached menarche.

Examination revealed mostly closed comedones (whiteheads) on the forehead and jawline, with occasional papules on the cheeks.

Treatment was started with a combination adapalene and BPO gel, with instructions to apply it on alternate nights for two weeks before increasing to every night if tolerated. On review after two months, there was no improvement and there were more papules and some pustules present. Lymecycline 408mg daily was added to the regimen.

At the next two-month review, there was significant improvement. She was advised to continue both topical and oral treatment for a further four months. After that, there was minimal acne, although she had started menstruation and reported occasional perimenstrual spots.

She was advised to continue topical treatment and to return if she developed further papules or pustules.

Six months later she had more severe acne, which was not related to her menses. She had some early scarring on her cheeks, which was making her worried that she would have permanent scarring.

She was advised to avoid squeezing the spots and started on trimethoprim 300mg twice daily in conjunction with her adapalene/BPO gel. She was also referred to the dermatology department to consider oral isotretinoin in view of her scar risk.

When she was seen two months later in secondary care she was considered to be a suitable candidate for oral isotretinoin as she had not cleared on her second category of oral antibiotic. She was switched to oral isotretinoin monotherapy on a low dose for eight months (to minimise side-effects). This cleared her acne completely and there has been no relapse for the past two years.

This site offers access to a range of information about acne management and prescribing, and summarises the underlying evidence.

This article provides a more in-depth review of all of the current evidence pertaining to new developments in acne management.

The authors provide some useful short summaries of the current data. There is also a succinct treatment algorithm.

Summarises information on when to refer to secondary care.