How to monitor and manage AAA, by consultant vascular surgeon Mr Matthew Waltham

An aneurysm is an abnormal, localised dilation of an artery. The most common site is the abdominal aorta below the renal arteries.

Epidemiological studies have shown the prevalence to be 2-5% in men over 65 years old. The most important risk factors are male sex, age, smoking and hypertension.

In some patients, growth is linear, but in others, there are periods of stability and periods of expansion.

Often asymptomatic until rupture, abdominal aortic aneurysm (AAA) is known as the silent killer. In England and Wales, 6,000 people die every year from complications of AAA, accounting for 2% of all deaths in men aged over 65 years.

Most aneurysms are degenerative in nature. The disease process is thought to affect the media of the artery. Atherosclerosis is often present, as the risk factors are similar, although studies show diabetes may be protective against aneurysms.

Rarer causes include localised infection in the arterial wall (mycotic aneurysm), connective tissue disorders such as Marfan syndrome, and dilation after aortic dissection.

Classification
There are a number of ways of classifying aneurysms, although diameter is the most important characteristic in terms of risk. AAAs are classified as small if the diameter is 3-5.4cm and large if 5.5cm or more.

Shape has classically been used to classify them, with most degenerative aneurysms being fusiform (spindle-shaped), whereas mycotic aneurysms tend to be saccular.

Aneurysms can also be classified as true, when the wall comprises all three layers of the artery (intima, media and adventitia), or false, when the wall is not continuous and there is extravasation.

This tends to occur when there has been sharp trauma, or dehiscence of an aortic graft.

Ninety-five per cent of AAAs are classified as infrarenal, with 5% being juxtarenal, suprarenal or thoraco-abdominal.

Most aneurysms are asymptomatic until they rupture, but occasionally they cause back or abdominal pain, or may even be noticed by the patient.

Many aneurysms are detected incidentally, when the patient undergoes examination or imaging for another reason.

On examination there will be a pulsatile, expansile mass in the epigastrium. It may be difficult to palpate if the aneurysm is small, in larger patients or in hypotensive shock.

Clinical estimation of size is possible but not accurate. The patient should be checked for other aneurysms, especially at the popliteal arteries, which are the second most common site.

Some aneurysms have a genetic basis, so it is generally recommended that male relatives of the patient have a screening ultrasound scan, perhaps when they are over 55 years old.

Rupture
Rupture will present as a sudden onset of severe abdominal pain, usually with circulatory collapse. Diagnostic confusion can sometimes occur if the patient presents with back, loin or groin pain, classically mistaken for renal colic.

Rarely, an AAA may rupture into the inferior vena cava (aortocaval fistula) or into the bowel, causing massive haematemesis (aorto-enteric fistula).

The latter is more commonly associated with graft infection after an open repair; primary aorto-enteric fistulae are very rare.

Investigations
Duplex ultrasound will confirm the diagnosis and accurately measure the diameter. CT scanning is generally used if the aneurysm is large enough for surgical repair to be considered, or if there are uncertainties with ultrasound.

CT images are used to assess size more accurately and to define the anatomical relationship of the aneurysm to the aortic branch vessels.

Blood tests are performed for anaemia, renal function and clotting problems. If there is significant cardiac or respiratory comorbidity, further tests of function may be done.

Screening
AAA can be detected with an ultrasound scan. In a large randomised study, screening men for aneurysms significantly reduced mortality.1,2

The NHS AAA screening programme (NAAASP) will cover all of England by April 2013 and will offer scans to men in their 65th year. It is designed to keep primary care workload to a minimum, but GPs must be aware so they can respond to patients' questions and discuss results.

The NAAASP operates separately from the vascular risk management programme. GPs will be told when their patients have been screened, and of the outcome of their scans.

Patients with an AAA should be referred to the local vascular service.3 Healthy lifestyle advice should be given for secondary prevention, particularly about giving up smoking and control of BP, both of which have been related to an increased rate of expansion.

All patients with vascular disease should be treated with a low-dose antiplatelet (for example, aspirin 75mg) and a statin if possible. These reduce morbidity and mortality from cardiovascular events, but there is also evidence that statins may reduce the expansion rate of aneurysms. 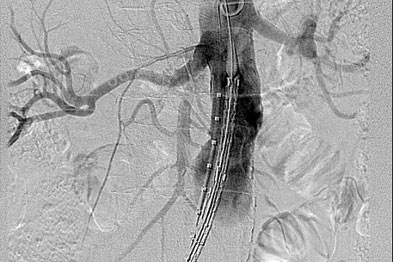 Surveillance
Small aneurysms measuring up to 3-5.4cm diameter on ultrasound need no further investigation. They should be kept under surveillance with yearly ultrasound scans for the smaller aneurysms, increasing to three-monthly once over 4.5cm.4

Surgery
Above 5.5cm in diameter, the risk of rupture begins to increase, so the aneurysm should be considered for repair. Most are now suitable for endovascular repair and this carries significantly reduced perioperative mortality compared with open surgery.5

In some units, open repair is still preferred for younger patients with less comorbidity and risk of complications. If there is significant comorbidity, conservative management may be adopted, particularly if the aneurysm is not suitable for endovascular repair.

Sometimes a decision is made to defer treatment until a larger diameter is reached, or not to treat at all.

In addition to diameter, other indications for repair include pain, tenderness and rapid expansion.

In open repair, a midline laparotomy is performed and the duodenum and small bowel are reflected to expose the aorta in the retroperitoneum. After administration of heparin, the aorta and iliac vessels are clamped. The aneurysm sac is opened and a polyester graft sewn in. The sac and peritoneum are closed over the graft and the wound closed.

Endovascular repair can be performed under general, regional (epidural) or local anaesthetic. A cut-down to the artery may be required, but some of the newer, lower-profile devices can be inserted percutaneously. The aneurysm sac is excluded from the circulation, so can no longer rupture.

Endovascular repair has revolutionised the way aneurysms are treated. Early endovascular devices were suitable for only a small proportion of patients, owing to anatomical restrictions.

Technological development of the devices, including the introduction of fenestrated grafts (with openings to allow blood flow to branch vessels such as the mesenteric and renal arteries) and branched grafts, means more than 90% of patients will now be suitable.

Medical treatments
Research is under way on the pathogenesis of aneurysm formation, expansion and rupture. So far we understand a degradative process occurs in the medial artery wall, with inflammation, expression of proteolytic enzymes, such as matrix metalloproteinases, and loss of collagen and elastin.

Once an aneurysm has appeared, it will slowly expand over time. The rate of expansion is related to the size of the aneurysm, increasing as it gets larger.

When the aneurysm is small (3-5.4cm diameter), the risk of rupture is very low, although occasionally small aneurysms do rupture. Once it is greater than 5.5cm in diameter, the risk begins to increase significantly, so repair is recommended.

If the aneurysm ruptures, the outlook is poor. Only about half of patients will reach hospital alive and in spite of advances in surgical technique and perioperative care, in-hospital mortality is still >50%.

Follow-up
After surgical repair, the prognosis is very good; few patients have any further problems and most vascular centres do not offer any specific follow-up.

Cardiovascular risk factors should continue to be controlled. Endovascular grafts are less secure and patients need follow-up imaging surveillance with either ultrasound or CT.

About 10-20% of patients need further intervention to correct graft-related complications, including movement of the graft and endoleak (persistent flow in the aneurysm sac).

Mr KB received an NAAASP invitation to attend for a scan at his GP practice. Although the invitation came with an explanatory leaflet, he was not sure what it meant, so his wife telephoned the local NAAASP office to obtain more information and rearrange his appointment for a more suitable time.

On the day, Mr KB attended for the scan. The procedure was fully explained and he was pleased how easy the scan was and that he just had to lie on a couch for five minutes while the scanning technician performed an ultrasound.

When he was told about the scan findings, Mr KB was surprised to hear that he had an AAA.

He was told that the aneurysm measured 6cm in diameter and he should be considered for treatment. He was referred at once to the local hospital. He was also given another information leaflet, which explained the condition in more detail.

As the news had come as something of a shock, Mr KB made an appointment to see his GP to find out more about his condition.

By then, Mr KB's GP had received written confirmation about the scan result and the referral.

A week later Mr KB attended his local hospital and was seen by the vascular surgeon. Before the clinic, he underwent a CT scan of the abdomen. His vascular surgeon again explained the condition.

According to the CT scan, the aneurysm was suitable for endovascular repair. A few weeks later, Mr KB was admitted.

The procedure was successful and performed through two very small cuts in his groin. He was able to return home two days later and made a rapid recovery.

Three months later, a follow-up CT confirmed the aneurysm had been successfully excluded and was no longer at risk of rupture.

- MASS, the Multicentre Aneurysm Screening Study, looked into the effect of AAA screening on mortality in men.1

This trial randomised 67,800 men to either a single ultrasound screening scan or no scan. There was a 42% reduction in mortality in the screened group after four years.

In this study, 1,252 patients with AAA were randomised to either open or endovascular repair. The 30-day operative mortality was 1.8% in the endovascular group and 4.3% in the open group. The difference was lost on long-term follow-up.

- The Immediate Management of the Patient with Ruptured Aneurysm: Open Versus Endovascular repair (IMPROVE).

This study, which is currently still in progress, is a multicentre RCT for the treatment of patients with ruptured aneurysm.

The website for the NAAASP. Contains detailed information which is aimed at both the general public and healthcare professionals.

The website for the Circulation Foundation, a charitable organisation that provides information for patients and funds research into vascular disease.