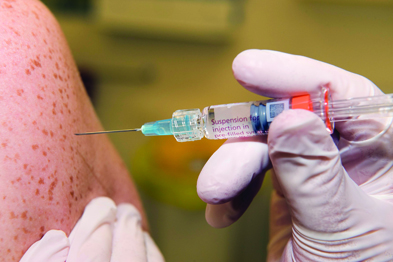 We spend a great deal of time, often unsuccessfully, trying to help patients to modify their lifestyle in order to prevent diseases like cancer. Now, with the HPV vaccine, we finally have something specific, safe, well tolerated and effective which we can give to patients, with the hope that we can dramatically reduce the tragic deaths of women from cervical cancer in future decades. Targeting the high-risk strains of HPV virus should prevent the majority of cases of cervical cancer from developing. 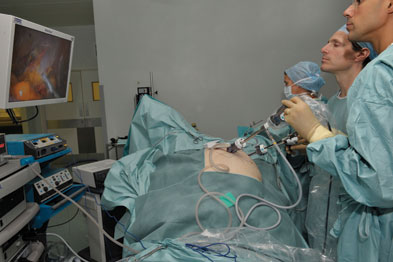 Surgery has always been an option for cancer treatment where an early diagnosis of localised disease is found. Modern surgical techniques have leapt ahead, with significant improvements in postoperative complications, recovery rates, hospital stays and so on. Here, a surgical team is undertaking a laparoscopic anterior resection of a colon cancer. This operation is much 'gentler' than the traditional technique, with the patient making a rapid recovery, including discharge from hospital within a couple of days of the procedure. 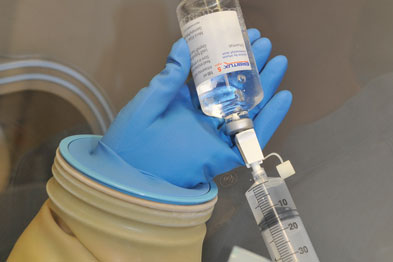 Traditional chemotherapy remains a huge part of the treatment for more advanced disease. New drugs offer the hope of better tolerability and efficacy, but chemotherapy remains very frightening and unpleasant to most of our patients. Here a drug is being mixed in a sterile environment prior to infusion in a hospital cancer unit. The patients often have reduced resistance to infection as a result of the immunosuppression caused by the drugs, hence the importance of maintaining sterility for these IV solutions. 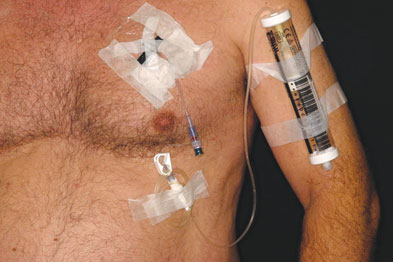 Here a 75-year-old patient with metastatic colon cancer is being given IV chemotherapy in the community via a portacath, a port implanted under the skin. This device is inserted under the skin with a line through a large vein. It allows frequent IV injections to be given through its silicone membrane over weeks or months. This man was pleased to be able to have this device, because it gave him greater flexibility with his frequent and numerous injections of chemotherapy.

Many modern chemotherapy drugs are now available in oral formulations, reducing the need for more unpleasant infusions, often in patients with difficult veins, making the process even more uncomfortable. Many drugs can now be given this way, but side-effects have not been eliminated. In this case, erlotinib is given to a patient with metastatic lung cancer as a second-line agent. He initially developed quite unpleasant skin side-effects, but the treatment bought him several months of reasonable-quality life. 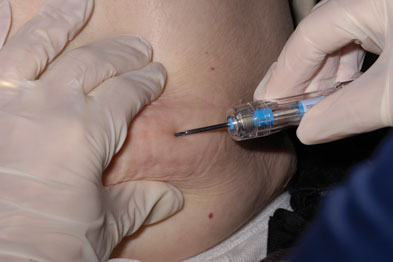 Tumours that are sensitive to hormonal manipulation can be effectively managed by hormone therapy. Most surgeries now have an increasing number of elderly men with prostate cancer coming in for threeor even six-monthly injections of LHRH agonists which are able to 'starve' these cancers by reducing testosterone levels. Here a three-monthly depot is being inserted into the patient's abdominal wall. 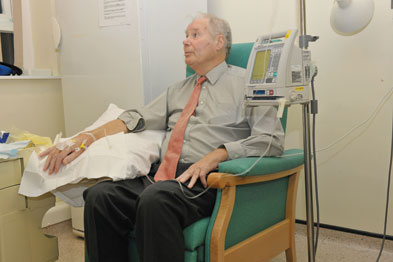 Zolendronic acid is a form of treatment, used here in a patient with carcinoma of the prostate with metastatic disease in his bones. He has monthly infusions of zolendronic acid as an outpatient, each lasting approximately 15 minutes. The drug alters bone metabolism, reducing bone damage and therefore pain, as well as having a direct effect on the cancer cells in the bone. It is usually well tolerated, although serious side-effects have occurred with IV bisphosphonates, including osteonecrosis of the jaw. 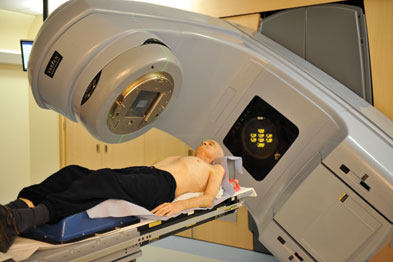 This is another completely different treatment modality, used both as a primary treatment option and as a tool in palliative care. This ex-smoker developed a small-cell carcinoma of the bronchus. This was not suitable for surgery and here, he is seen having external beam radiotherapy in a linear accelerator. In this patient, cure was not an option, but he obtained useful symptom relief, giving him several months of good-quality life, before deteriorating and succumbing to the disease.

The Joint Committee on Vaccinations and Immunisations (JCVI) has said that Moderna's...

The MHRA has approved an updated version of the Moderna vaccine that targets both...

Majority of GPs back taking industrial action in the coming year, poll suggests

The majority of GPs support taking industrial action in the coming 12 months to push...