Chickenpox develops latency in the dorsal root ganglion after primary infection and reactivation can occur throughout life, in the form of shingles.

In the UK, primary infection has a peak incidence in winter and early spring. In England and Wales, incidence is 1,290 per 100,000 person-years. Chickenpox is common, so most pregnant women exposed to the virus are immune and only three in 1,000 pregnancies are complicated by primary infection.

Varicella can develop between one and 16 days of life in infants born to mothers with active varicella around the time of delivery.

Chickenpox is a notifiable disease in Northern Ireland and Scotland, but not in England and Wales.

Chickenpox is one of the most contagious childhood infections and the household attack rate for non-immune individuals who come into close contact is about 90%. School contact tends to be lower at 12-33%.

The virus is spread by direct contact or airborne droplets followed by mucosal invasion of the upper respiratory tract and conjunctiva, or direct contact with infected vesicles. Primary infection causes chickenpox.

Asymptomatic infection is unusual, but some cases are so mild, they go unrecognised. The primary viraemic phase is followed by a secondary viraemia to the skin and the mucosal surfaces.

Children are contagious from one to two days before the onset of the rash until all lesions have crusted over. The incubation period is 10-21 days, but most children usually become ill 14-16 days after contact. However, the incubation period can be much shorter in immunosuppressed patients or longer if the child has received varicella zoster immunoglobulin (VZIG).

Each child in a family who develops varicella tends to have sequentially worse disease, with the final child being the most unwell. Young infants, adolescents and adults tend to have more severe disease, with a higher rate of complications.

The current two-dose schedule provides 98% immunity for children and 75% immunity for adolescents and adults. Breakthrough infection in both groups is milder, with fewer lesions and systemic symptoms than unvaccinated individuals. Reinfection is rare and vesicular rashes in childhood are often difficult to differentiate in the early stages.

Shingles occurs as a reactivation of the dormant varicella zoster infection and usually presents as a painful, vesicular rash in a dermatomal distribution. There are usually no systemic symptoms, but post-herpetic neuralgia can persist for months after resolution of the rash.

Chickenpox is characterised by the presence of a generalised, pruritic rash that develops into vesicles, then pustules and finally crusts.1

A detailed medical history is vital in cases where the diagnosis is uncertain, and establishing recent exposure to varicella can be helpful.

Diagnosis is important so that parents can be counselled about contact avoidance and symptom relief. Hospital admission should be avoided wherever possible, to avoid unnecessary nosocomial outbreaks.

Signs and symptoms
Adolescents may complain of a prodrome of nausea, myalgia, headache and loss of appetite, but symptoms in younger children are usually non-specific, although fever is practically universal.

The classical sign of chickenpox infection is the generalised, cropping vesicular rash and intense pruritus. The rash is seen mostly on the head and trunk, but can occur in any area of the skin and conjunctiva.

The rash appears in crops, with new lesions occurring for three to six days following the primary lesion. Most lesions will heal without scarring and the disease resolves within about one week of symptom onset.

In immunocompromised children, including those with HIV or on long-term steroids, progressive, severe varicella can develop. This is characterised by high fever of long duration, continuing eruption of cropping lesions and the appearance of complications. In some cases, despite adequate treatment, the disease can be fatal. Haemorrhagic varicella, with bleeding into and around lesions, is also seen, but is rare.

Investigations
No investigations are usually necessary in an otherwise well child. Where the diagnosis is unclear or has implications for other family members or in pregnant women, detection of viral DNA from vesicular fluid by PCR has the highest sensitivity.

The mainstay of treatment is supportive care. This includes adequate oral fluids, antipyretics and observation of possible complications.

There is some evidence that overwrapping can lead to worse disease eruptions, so parents should be advised to keep the child cool.

There is controversy about whether the use of NSAIDs increases the risk of necrotising soft tissue infection and invasive group A streptococcal infections associated with chickenpox infection.2

It is not advisable to use ibuprofen as an antipyretic in chickenpox because of the possible association with these complications.

Additionally, salicylates should not be used, because of the increased risk of Reye's syndrome.

Calamine lotion can alleviate itching. Chlorphenamine can also be used to alleviate itching in children aged over one year. Advice should be given to keep the child's nails short to prevent further skin trauma and secondary bacterial infections.3

Aciclovir
Aciclovir is the only drug licensed for varicella in children. Studies have shown that aciclovir can shorten the disease course by approximately one day of fever and rash.

Some experts recommend oral aciclovir for non-immune household contacts, because they are likely to have more severe disease.

Aciclovir is only effective if given within 48 hours of the rash eruption, as viral replication ceases 72 hours after the first vesicles appear.

Aciclovir should only be given to adolescents and adults and should not be routinely prescribed in otherwise healthy children over one month of age in whom the disease is likely to be mild.

Immunoglobulin therapy
Immunoglobulin is not effective once the disease is established, but should be considered in neonates and the immunocompromised. This takes the form of IM VZIG or IV immunoglobulin (IVIG). Immunoglobulin should ideally be given within 96 hours of significant exposure and not delayed past seven days.

Most children can be managed in the community. Parents should be advised on school attendance, air travel and contact with pregnant women and other high-risk groups (see table 1). 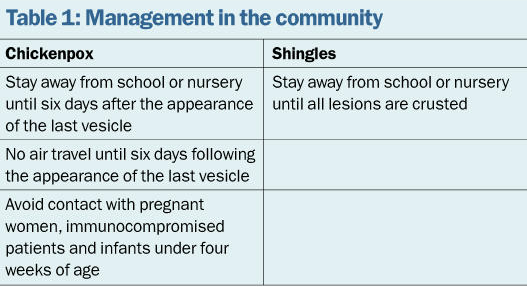 Where routinely administered, vaccination has significantly modified varicella epidemiology, reducing clinical disease and shifting the incidence to higher age groups, especially where it is not universally taken up.

In surveillance areas with high vaccine coverage, the rate of disease has decreased by approximately 85%.4

Chickenpox exposure
For exposed, non-immune patients, contact precautions should continue for 10-21 days after exposure to the index patient (up to 28 days for neonates or a child who has had IVIG). Public Health England defines exposure as residing in the same household, maternal/neonatal contact, contact in the same room for >15 minutes and kissing contacts.

Severe complications are rare in chickenpox and are seen in about one in 100,000 children.4

The most common hospital admission is due to secondary bacterial skin infection with group A streptococcus or staphylococcal infection, more common in children who also have eczema. This is characterised by increasing fever with redness and pain around the original lesions.

Any child with fever beyond five days of rash onset should have a medical review to rule out the possibility of bacterial infection.

Adolescents and adults are 25 times more likely than children to develop complications and these are usually related to pneumonia.4

Infection during pregnancy
Non-immune pregnant women coming into contact with varicella are at risk of developing in utero infection, leading to congenital varicella syndrome, or contracting severe disease themselves.

Infection of the fetus during the first 20 weeks of pregnancy can cause fetal death or congenital varicella syndrome, characterised by limb abnormalities and skin scarring. Sometimes there is also CNS and eye involvement.

If the fetus is infected in utero during the second 20 weeks, the infant can develop subsequent herpes zoster infection in early life without having obvious chickenpox previously.

In newborn infants, varicella can be fatal if the mother develops the disease from five days before to two days after delivery.

If varicella develops in the mother more than five days before delivery and the gestational age of the fetus is above 28 weeks, the child should be protected by maternal specific IgG antibodies.

Neonates are at increased risk of developing fulminant chickenpox or haemorrhagic varicella, so if the mother develops primary infection at term, there is a significant risk to the infant.

A previously healthy three-year-old child develops fever and coryzal symptoms that worsen over a few days.

His mother takes him to see the GP when she notices vesicles on his torso. These are intensely itchy and there are a few pustules developing. The child has mild eczema but no sign of secondary skin infection.

On examination, the child has a spreading vesicular rash in crops on the face and torso, with a few on the arms and legs. Several are umbilicated and a few pustules appear to be crusting over.

The child is diagnosed with simple resolving chickenpox and his mother is advised to keep him away from nursery until the vesicles have crusted over.

Provides a range of management scenarios for different populations, including pregnant women and neonates.

This guideline from the RCOG aims to assess the evidence regarding the maternal and fetal risks of varicella zoster virus infection in pregnancy and to assess whether complications can be prevented or modified by the administration of VZIG or by the treatment of infected individuals with aciclovir.

3. Tebruegge M, Kuruvilla M, Margarson I. Does the use of calamine or antihistamine provide symptomatic relief from pruritus in children with varicella zoster infection? Arch Dis Child 2006; 91: 1035-6.

Fitness to practise and revalidation to continue despite pandemic, GMC confirms

Revalidation and ongoing fitness to practise cases will continue despite huge pressure...

IRIS is an evidence-based programme designed to reach female survivors of domestic...

Loss of taste and smell and neurological aspects of 'long COVID' infection will be...

COVID-19 vaccine stocks must not be diverted to large sites ahead of local GPs, warns BMA

The government must ‘ramp up’ COVID vaccine supplies to general practice and avoid...