A south-east London practice worried a significant number of patients had undiagnosed long-term conditions came up with a novel solution, writes Neil Durham.

Sitting at her desk at the Gallions Reach Health Centre in Thamesmead, south-east London, public health lead Dr Eugenia Lee is struggling to contain her excitement.

She has just learned that her idea to set up an opportunistic health check project at the local Morrisons supermarket in Twin Tumps Way, a stone’s throw from the practice, has won the overall national MDU Enterprise Award 2012.

Dr Lee, also GP commissioning lead for children, local authority partnership and population health for Greenwich Clinical Commissioning Group (CCG), is interrogating her computer for patient reaction to the scheme she dreamt up and implemented between May and September 2009. 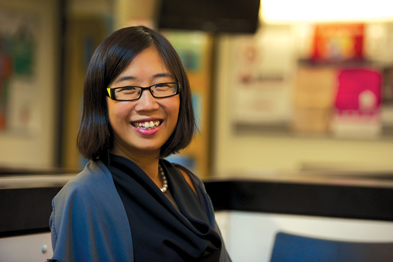 Dr Eugenia Lee: 'These services have led to a more positive patient experience.’

The practice received £20,000 funding for staff costs and equipment from NHS Greenwich to take the practice team out to where its potential patients were shopping. She was concerned that health inequalities identified across Greenwich borough implied that a significant number of patients in her practice had undiagnosed long-term conditions.

She says: ‘An in-house review showed that patients on our QOF registers were well managed with good health outcomes but there were a significant number of patients, especially men in black and minority ethnic groups, who had not accessed the surgery for many years.’

But if the potential patients were not coming to the surgery, where should the practice look for them?

Dr Lee says: ‘If they’re not coming to see us, I thought we should be going to see them. We want to see them before they have a heart attack or stroke. The highest footfall area locally was our local supermarket. We applied for funding through NHS Greenwich and on eight consecutive Saturday mornings we set up an opportunistic outreach check including measurements of BP, random blood glucose and BMI, with spirometry offered to smokers.

1,024 participants were screened, 424 were offered follow-up for one or more abnormal readings. Of these, 325 had no previously diagnosed disease, 95 had a raised random blood glucose, 172 had a raised BP reading and 93 had an abnormal spirometry result.

At six-month follow-up, 210 of the 325 participants with previously undiagnosed conditions or abnormal readings had seen their GP as advised. Of these 208 had further investigations and 155 went on to have medications prescribed.

Dr Lee adds: ‘This initiative not only benefited those with undiagnosed pre-existing conditions, it also helped with borderline results to initiate lifestyle changes. This model has since been rolled out to other major public spaces including mosques, temples, churches and workplaces where the workforce is predominantly male. We’ve seen real changes. These services have led to a more positive patient experience.’

Dr Lee would not hesitate to recommend it to other CCGs seeking to find undiagnosed patients.

Dr Hany Wahba, Greenwich CCG chairman, said: ‘I am delighted for Thamesmead Medical Associates and I congratulate Eugenia and her team on winning such a prestigious award. Undiagnosed long term conditions constitute major health risks and this example of taking health checks out to ‘hard to reach’ groups is really commendable.’

Perhaps the final word is best left to comments from the patients themselves.

Comments to the practice include: ‘Excellent service. You should do this everywhere! Thank you!’ ‘I thought this was a good thing to be done in a supermarket, as people don’t always have the time.’ And: ‘I am very pleased with the idea to run a consultation at Morrisons, otherwise I will never have time to go and see my GP. Thank you very much.’