Small commissioning groups have major benefits, but they are under severe pressure. Tom Moberly reports.

Commissioning groups have repeatedly been told that their make-up must be decided locally and the DoH does not believe that 'one size fits all'.

But small clinical commissioning groups (CCGs) are seeing that one size is being imposed on many - a size remarkably similar to that of the PCTs they are to replace.

The 'ready reckoner' tool released by the DoH last month has been seen as a particularly heavy stick with which to bash small commissioning groups.

The tool was designed to help groups work out running costs, but is being seen as a way for the government to push its supposed preference for larger groups. For example, the tool defaults to recommending populations of 300,000, when currently the average CCG population is under 195,000.

Pushed into mergers
Dr Mike Ingram, a partner at the Red House Group of practices in Hertfordshire, has formed one of England's smallest CCGs, covering 18,900 patients across three surgeries. He says the group is being pushed by its local PCT to merge with neighbouring CCGs. 'It is out to get us,' he says. 'It is fairly obvious that it doesn't want us to remain the size we are.'

Dr Krishna Korlipara, chairman of the Bolton Collaborative Consortium, says his group of nine practices with 28,880 patients is also under pressure to merge.

Despite these pressures, some small groups have thrived. DoH national clinical commissioning network lead for England Dr James Kingsland is among the leaders of the Wirral NHS Alliance, a small seven-practice CCG, which has strong financial performance this year. 'Within four months, we already have a 4 per cent underspend on our budget,' he says.

Dr Korlipara says the practices in his group have among the best medicine referral and demand management across the Bolton area. 'Despite this being the most deprived area of practices, demand is being contained much better than by other practices.'

Dr Ingram says his group has a track record of providing high-quality clinical care at low cost, with referrals among the lowest in the area. 'Our underspend is the best in Hertfordshire,' he says. 'That is a sign of the quality of service.' 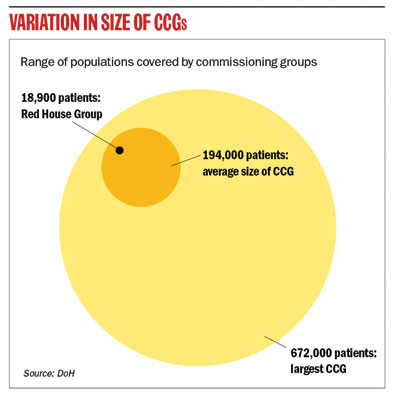 Low-cost, high-quality care
Dr Ingram believes the cost-efficiencies across the practices in his group result from the continuity of care they provide.

But despite their successes, there is a risk they will not be allowed to survive. David Jones, an East of England strategic health authority manager who works with commissioners in the region, warns that whatever advantages small groups have 'the best doesn't always win out'.

'I can appreciate the value of some of the smaller groups in terms of having a better understanding of their local population,' he says. 'But the harsh reality of finance and governance arrangements are going to make it very hard for some smaller groups.'

But Dr Ashok Atrey, clinical lead for the Taba Consortium in Ashton, Leigh and Wigan, says groups should justify their size. 'We had no pressure put on us to merge with other CCGs,' he says.

'Locality groups merged to make two CCGs in our borough, one with 250,000 patients and the other with 70,000 patients. Size matters for some things but it should be manageable and must be such that constituents have a sense of ownership.'

Dr Kingsland says GPs who have worked in small groups over many years should use experience to bolster their case.

'If someone is saying you can't be small, I'd say "What is your experience at delivering health in a small population?", because they won't have the evidence.'

Dr Stewart Findlay, Durham Dales CCG chairman, says: 'We know from experience, because we've been in these groups for 18 years, that we have far better engagement of GPs in smaller groups.' But he admits his group is being forced to consider mergers to survive on the proposed £25 per patient management allowance.

Dr Kingsland adds: 'It would be helpful if you justify why you have created the structure you have, in terms of cost and boundaries, how it was decided, and how you will mitigate risk. If you are able to answer those questions then you are the right size. If you aren't then you need to look at your size.'