A 72-year-old gentleman attended with a recent history of episodic and short-lived hiccups, which occurred only after finishing meals. There was no evidence of dysphagia or odynophagia, and he was unaware of any dyspepsia or other symptoms or problems of the upper GI tract.

He was usually very well, did not drink alcohol or smoke, and he was not taking any regular medication.

The hiccups had started about two weeks before and he emphasised that he would not have attended for this isolated problem. However, the strength of the hiccups had increased and he was concerned that they might lead to vomiting.

He said that he experienced between one and five hiccups on each occasion and that they stopped as quickly as they had started.

Examination
Physical examination appeared unremarkable in terms of a general ear, nose and throat and abdominal examination. The patient denied any weight loss and did not look anaemic, jaundiced or otherwise unwell.

This overall clinical impression made me wonder if any baseline investigations, such as general bloods or a chest X-ray, would be useful.

The main choices for management at this point were to consider some symptomatic treatment, for a problem that could well be temporary and self-limiting, or an immediate referral to a specialist service. Although he did not have any obviously worrying features.

The patient was not particularly concerned and was happy to try some medication for symptomatic relief and attend the next week to report back on any success, progress of symptoms or any additional features.

Worsening symptoms
The following week he returned, reporting that the episodes of hiccups had increased in terms of their length and intensity. I referred him under the two-week rule because even urgent appointments to gastroenterology seem to take too long locally.

He was seen within eight days and underwent gastroscopy which revealed a localised but inoperable oesophageal carcinoma.

This demonstrates that hiccups are not always trivial and harmless. Often they are regarded to be simply temporary involuntary spasms of the diaphragm that occur in humans from the fetal stage onwards.

The physiological function of hiccups has not been fully determined, although it is thought that they may prepare the muscles and co-ordination of the chest wall and upper GI tract for suckling and breathing.

In some patients hiccups can last several days or longer, they may even last for years, which may affect speech and sleep.

The main nerves responsible for hiccups are the phrenic and vagal nerves; this explains why hiccups are mostly associated with GI triggers, such as local irritation or foreign bodies.

However, there can be many other causes of hiccups, including those of cardiac, metabolic, pulmonary or central nervous system origin, as well as toxic and sometimes psychiatric causes. Therefore, investigation may require tests in all areas. 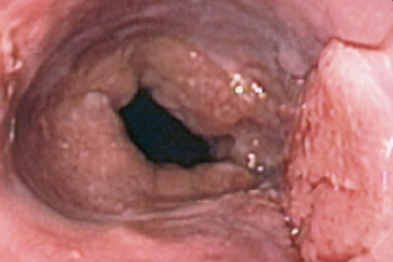 Underlying malignancy is one potential cause for recurring hiccups (Photograph: SPL)

Recurring hiccups
If hiccups are recurring frequently in similar situations, then the chance of identifying a specific cause increases and this needs to be investigated. There is a range of treatment options beyond medication in cases of very persistent hiccups, although some of these are invasive and rather variable in their success rate.

In terms of treating simple, temporary hiccups it is worth knowing that most of the commonly suggested and sometimes bizarre approaches have little reliable evidence.

This patient's hiccups improved after some local dilatation during the endoscopy, but he could otherwise only receive palliative treatment.