A male patient of Asian origin presented with a new, solitary pigmented lesion on his back.

0.5 CPD Credits Click here to take a test on this article and claim your certificate on MIMS Learning

A male patient of Asian origin, with light to medium brown skin, presented with a new, solitary pigmented lesion on his back. As far as he could remember, it had developed over about six months. There was no previous history of skin disease and he was in good general health, with no significant personal or familial medical problems or medication.

Inspection revealed a deeply pigmented raised lesion about 6mm in diameter on his upper back. It was firm to the touch, the centre slightly depressed, and light adherent scale was present. There were no other lesions on the rest of the skin.

Dermoscopy was not reassuring, revealing a chaotic pattern of dots and globules (clods) of varying sizes. Fine radial streaks were seen at several points of the periphery. There were no features of a benign lesion, such as haemangioma, dermatofibroma, seborrhoeic keratosis or benign naevus.

An experienced colleague reviewed the lesion, and options for diagnosis and management were discussed. Differential diagnosis was wide, including pigmented basal cell carcinoma, melanoma and a solitary lesion of an inflammatory skin condition, such as discoid lupus, sarcoidosis or cutaneous TB. To avoid a possible large or keloid scar, a small incisional diagnostic biopsy was taken.

Potent topical steroid was prescribed and the patient will be followed up. On further discussion, it emerged that there may have been an insect bite. The possibility of a lichenoid keratosis was raised – this may occur when a seborrhoeic keratosis undergoes spontaneous regression, and is associated with even grey dots on dermoscopy. 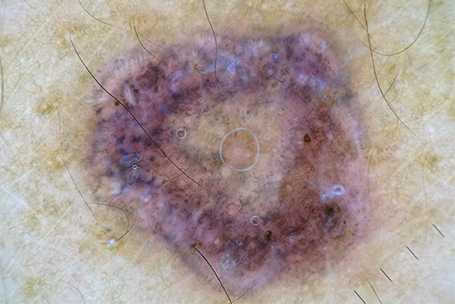 Dermoscopy revealed a chaotic pattern of dots and globules

Ordinarily, a solitary suspicious pigmented lesion should be excised in toto, with a 2mm margin if melanoma is suspected (wider excision if confirmed), or 4mm margin for suspected basal cell carcinoma, which would be definitive treatment.

This option was considered here, but knowing that inflammatory dermatoses in deeply pigmented skin may present atypically, and with two risk factors for a severe hypertrophic or keloid scar (Asian skin and upper back), it was decided to take a small diagnostic biopsy.

Skin cancer is less common the more deeply pigmented the patient’s skin. I have seen basal cell carcinoma in two Asian patients; both were pigmented. Melanoma is rarely seen in deeply pigmented skin, but does occur, the best-known victim being the musician Bob Marley.

Many rashes present differently in pigmented skin, but there remains a shortage of data about the clinical details.

A new, solitary changing skin lesion in an adult of any skin colour merits prompt evaluation because malignancy, although less common the darker the skin, cannot be ruled out. However, the danger of keloid scarring, which can be far worse than the original lesion, should be considered before excision.

Owing to genetically determined differences in melanocyte behaviour in different racial groups, inflammatory skin disease may present with baffling pigment changes. Further research and dissemination of existing knowledge in this area are required.