For GPs with a growing family, plenty of room for passengers and luggage is a high priority when looking for their next car, making the SUV market the obvious place to start.

Big four-wheel drive vehicles can be expensive to run because their fuel efficiency is poor. As these cars are mostly used on the school run, with perhaps longer trips for work, their drivers would really benefit from all of the positive attributes of a hybrid electric vehicle. 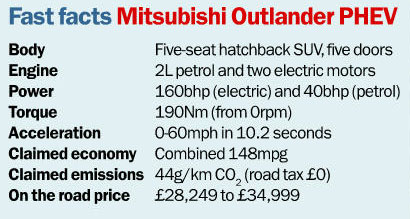 Until now, hybrids have all been smaller hatchbacks. Enter Mitsubishi and its latest version of the Outlander 4x4 SUV. The Outlander is normally available with a 2.2L diesel engine but now, for much the same price, it offers a plug-in hybrid electric vehicle (PHEV) version.

The 2L petrol engine is there to charge the batteries and run the front axle when an extra 40bhp is needed for overtaking.

The most interesting and useful feature, however, is that in addition, you can plug in the Outlander to charge the batteries at home or at a public charger, which minimises the petrol engine's use of fuel.

The lithium-ion cells sit between the axles to keep the centre of gravity low and take about five hours to charge from a standard three-pin home supply, or 30 minutes on a fast charger at a cost of £1.

You can then drive up to 30 miles on electric power alone before the engine is needed, depending on conditions and demands.

Regenerative braking is standard and the degree of this effect can be altered using paddles behind the steering wheel - clever stuff.

The styling is pretty bland. It is a nondescript, boxy SUV that looks identical to the diesel Outlander and lacks any futuristic touches to hint at the advanced technology under the skin. I think Mitsubishi needs to be a bit braver when it comes to the next update and facelift. 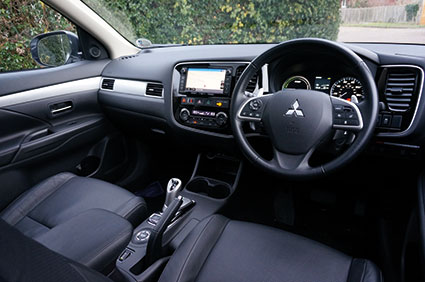 So what is it like to drive? Well, like all electric vehicles, from standstill, the silent, instant torque whisks you along the road almost effortlessly. It is very addictive and leaves you feeling quite smug as you realise this is achieved with zero emissions.

When the engine does cut in, it is a smooth transition and the unit is quiet unless asked to work really hard. However, the PHEV is no lightweight, so performance is only adequate and the handling is acceptable. This is no sports car.

Practicality is excellent, though, with plenty of room for five adults and cavernous luggage space.

Equipment was generous in my GX4h top-model test car and this would be the one to go for. Sat nav, leather seats, a premium sound system and a powered tailgate give you a superb feel-good factor.

The only useful feature that some families will feel is lacking is a seven-seat option, as the batteries take up too much underfloor space.

The plug-in hybrid market is growing - the Toyota Prius is now available in rechargeable mode, BMW offers the futuristic but expensive i3 and Audi has just joined the ranks with the A3 Sportback e-tron.

However, for those who want to match the practicality offered by this Mitsubishi, only Porsche can compete, with the Cayenne S E-hybrid. Unfortunately, that sporty beast will cost you at least £60,000 - twice as much as the Mitsubishi.

I loved driving the PHEV. It completed a whole day at work, with me travelling to and from the surgery and out on visits, on a single overnight charge. I took it on a couple of long journeys and it performed as well as any 4x4 SUV, without the 'range anxiety' of pure electric cars. Electric is the future and for stealing a march on competitors, Mitsubishi is to be congratulated. This advanced-technology car is one you can buy comfortably with your wallet as well as your heart.

Researchers have called for 'decisive action' to reverse declining continuity of...

Salaried jobs are now the most attractive career option for GPs, according to a GPonline...

GPs fear millions of pounds in primary care funding could be lost because rising...