The BMA has called for GP funding in 2018/19 to deliver a 2% pay rise on top of the RPI rate of inflation - currently running at 4% - in evidence to the Doctors and Dentists Review Body (DDRB).

The BMA called on the DDRB to back a pay rise for GPs above the 1% public sector pay cap, which has been maintained since 2013 by the government following a two-year pay freeze at the start of the decade.

'Strong evidence' is emerging of the impact that 'year after year of below-inflation increases' and heavy real-terms pay cuts are having on the NHS' ability to recruit and retain doctors, the union warns.

Rising inflation means that falls in GP income shown in data on earnings and expenses for 2015/16 - the latest official data available - are likely to have accelerated in 2016/17 and 2017/18 despite increased investment, the BMA warns. In 2015/16 a 1.8% rise in gross GP earnings was outstripped by a 2.8% rise in expenses.

Evidence submitted by the Department for Health and Social Care (DHSC) earlier this year also acknowledged key factors driving the GP crisis in England, highlighting falling GP numbers, a sharp decline in income and a drop in the numbers of sessions GPs work on average.

The BMA evidence highlights the sharp drop in income for GPs working in GMS and PMS practices over the seven years to 2015/16, including the graph below, and cites evidence from the Office for Budget Responsibility (OBR) that the CPI measure of inflation will run at over twice the existing 1% public sector pay cap, while the RPI measure will run at above 3% until 2022. 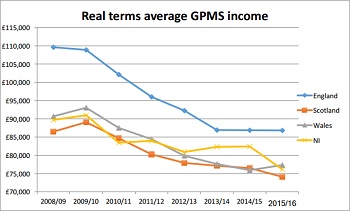 BMA evidence points to huge pressure on the NHS across the UK, warning that the true level of financial shortfall in England is masked by short-term or one-off savings. In Scotland, it warns that health spending fell in real terms in 2016/17 if cash ring-fenced for social care is excluded, while there is a lack of clarity over whether funding allocated for primary care in the coming years is new NHS money, or simply funding cut from elsewhere.

Even the 2.3% real-terms increase in funding for the NHS in Wales in 2017/18 is below the amount a parliamentary review recommended, the BMA warns, with health boards overspent in recent years and one in five GP practices at risk of closure. In Northern Ireland, funding for general practice fell from an 11% share of the NHS budget in 2003 to just 5.4% in 2015/16.

The BMA evidence warns: 'Year after year of real-term pay cuts have had a damaging impact on the morale of frontline NHS staff at a time when understaffed and under-resourced hospitals and primary care services are having to manage unprecedented levels of patient demand.

'There are currently chronic shortages and rota gaps across the NHS and the difficulties with recruiting and retaining staff are a major challenge. The critically low levels of staffing in the NHS are well documented. Increasing rota gaps and vacancies are a key driver of dissatisfaction for doctors, impacting on their wellbeing, patient care and the sustainability of the NHS.'

Evidence submitted by the union also highlights GP vacancies, the impact of Brexit on doctors planning to quit the UK, problems recruiting medical trainees, and warns against freezing trainers' and appraisers' grants.

The report says: 'GPs and practices in England must see a realistic increase in funding for expenses this year to reflect the real-terms increase in expenses. We would expect an increase to general expresses of RPI, plus an amount (at least 2%) to represent the historic underinvestment in GP expenses.'