UTI is a common presentation in primary care and a leading cause of antibiotic prescription. A UTI may present as urethritis or cystitis (lower UTI) or as pyelonephritis (upper UTI).

Women are at a higher risk of UTI than men because a shorter urethra more easily allows the ascent of bacteria that have colonised the perineum. Other risk factors for UTI are sexual intercourse (women), lack of estrogen (in women), genitourinary malformation, kidney stone, prostatic enlargement, neuropathic bladder, renal tract carcinoma, diabetes mellitus and urinary catheterisation. 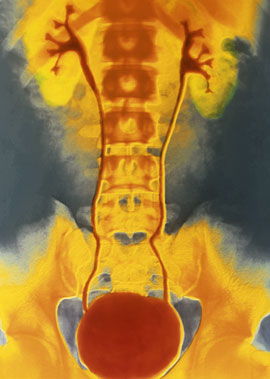 Clinical presentation
Around 80 per cent of uncomplicated community-acquired UTIs are caused by Escherichia coli.

Symptoms of a lower UTI are dysuria, frequency, urgency and suprapubic pain. The urine may be cloudy, foul smelling and haematuria may be evident.

Acute pyelonephritis is characterised by loin pain, fever, nausea and vomiting, and rigors. UTIs can be asymptomatic, and in the elderly present non-specifically with symptoms such as malaise or confusion.

Positive nitrite and leucocyte tests on dipstick support the diagnosis of UTI while negative tests make it unlikely.

A urine sample for culture should be requested in cases of treatment failure, upper UTI, known urinary tract abnormality, recent hospitalisation, in men and in pregnant women.

UTI in non-pregnant women
In an uncomplicated lower UTI a three-day course of trimethoprim or nitrofurantoin is recommended as first-line treatment. Evidence suggests that this is as effective as a longer course of antibiotics and has the advantages of improved compliance, reduced risk of drug side-effects and less expense.

A good fluid intake should be encouraged. Alkalinisation of the urine, usually with potassium citrate, may help relieve symptoms of a UTI but should be avoided in the case of nitrofurantoin, which has reduced activity at higher urine pH.

Cephalosporins, co-amoxiclav and quinolones should be avoided as first-line treatments for simple lower UTIs in order to limit bacterial resistance to these antibiotics. Resistance to amoxicillin is widespread and so it is not a suitable empirical choice of antibiotic for UTIs.

There is increasing concern over extended-spectrum beta-lactamase producing bacteria that display multiple resistance, not only to penicillins and cephalosporins but also to other classes of antibiotic, and are most likely to arise after frequent antibiotic use, or following hospital admission.

In cases of acute pyelonephritis the first-line therapy should be a quinolone or a cephalosporin or co-amoxiclav. Urine for culture should be sent before treatment and follow up arranged, with hospital admission reserved for those systemically unwell.

As there is no evidence of increased morbidity with asymptomatic bacteriuria in the elderly, antibiotic treatment is not recommended under these circumstances.

Screening for asymptomatic bacteriuria in the first trimester by sending an MSU for culture is good practice.

Beta-lactam antibiotics are safe in pregnancy although co-amoxiclav should be avoided. A week's course of cefalexin represents a good first-line option with subsequent urine culture a week after completion to ascertain if treatment has been successful. Trimethoprim (a folate antagonist) and quinolones should be avoided.

UTI in men
A lower UTI in men is more likely to reflect a urinary tract abnormality than in women and a longer course of antibiotics is necessary. SIGN guidelines recommend a two-week course of a quinolone antibiotic for UTIs in men because this deals effectively with prostatic infection, a common underlying cause.

An MSU should be sent and urology referral for further investigation arranged in cases of failed treatment, recurrent infection and upper UTIs.

In a case of urethritis consider performing urethral swabs for chlamydia and gonococcus (or a first void urine sample with PCR analysis for chlamydia).

The catheterised patient
Long-term catheterisation inevitably leads to bacteriuria. Treatment of asymptomatic bacteriuria is not recommended. However, should a catheterised patient develop fever, suprapubic or loin pain and features of systemic illness then a urine sample should be sent for culture and, after a change of catheter, an antibiotic given.

Recurrent UTI
Recurrent UTI, defined as three or more UTIs within a year, is more common in women. Use of cranberry products (tablets or juice) can reduce the frequency of recurrence and is considered safe although they can disturb INR in patients taking warfarin.

Low-dose antibiotic prophylaxis administered at night (or post-coitally) is however more effective than cranberry products or methenamine, reducing UTI recurrence by up to 90 per cent compared with placebo.

Recurrent UTI in men is most commonly linked to bladder outflow obstruction and, in particular, prostatic enlargement. Urology referral is appropriate for further investigation.