DTP, polio and Hib
Diptheria, tetanus and pertussis (DTP), polio and Hib vaccines are now combined into one injection. This is a combination vaccine that does not contain any live organisms so cannot cause any of the diseases.

Until 2004, the polio vaccine was given as oral drops. However, it is now always given as an injection. If a patient had previously started a course of polio immunisation with the oral vaccine, they can finish the course with polio injections.

The Hib vaccine is not given to children over four years because, by this age, the risk of infection from Haemophilus influenza is much less than in young children and babies.

Ther pertussis vaccine is not usually given to children over the age of seven years. 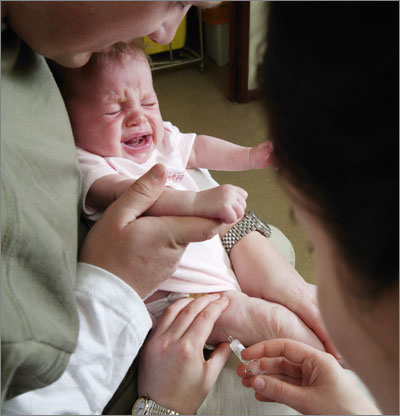 The PPV vaccine is given to older children and adults who are at risk of pneumonia.

The PCV vaccine is a separate injection and was added to the routine immunisation schedule in September 2006.

Children who are in an at-risk group and have previously had their routine PCV immunisations should also have one injection of PPV as soon as possible after their second birthday (but at least two months after the final dose of PCV).

However, children who are in an at-risk group under the age of five years who have not previously had routine immunisations with PCV will need both PCV and PPV.

HPV vaccine
Cervarix is the vaccine of choice for the HPV vaccination programme in the UK.

The UK Joint Committee on Vaccination and Immunisation recommended the routine vaccination of girls aged 12-13 years of age, which started in September 2008.

A catch-up programme is in place for girls up to 18 years.

BCG vaccine
BCG immunisation to protect against TB is no longer given routinely to all schoolchildren. It was offered to all children at about aged 13 until autumn 2005.

BCG is now offered only to those at increased risk of catching TB. In the UK, immunisation is offered to:

Children (under 16 years) who have come to live in the UK from countries where TB is common (at least 40 cases per 100,000 people per year) and have not been immunised before.

Contraindications
There are very few reasons why children should not receive their full course of immunisations. Immunisations are generally very safe and effective.

The two most common reasons why some immunisations might not be advisable are:

Administration of vaccine
Most vaccines should be given by IM injection. Injections given IM, rather than deep subcutaneously, are less likely to cause local reactions.

It is recommended that where two or more injections need to be administered at the same time, they should be given at separate sites, preferably in a different limb.

If more than one injection is to be given in the same limb, they should be administered at least 2.5cm apart. The site at which each injection is given should be noted in the patient's records.

The Royal College of Nursing states that infants under one year should receive all vaccines in the anterolateral aspect of the thigh since the deltoid muscle is not sufficiently developed.

The gluteal muscle should not be used for vaccination, because it is highly unlikely that the vaccine will reach the muscle and this may then result in poor immune response.

These include pain, swelling or redness at the site of injection, which are usually self-limiting and do not need treatment. Occasionally paracetamol or ibuprofen may be given for any discomfort.

Local adverse reactions generally start within a few hours of the injection and are usually mild and self-limiting. Although these are often referred to as 'hypersensitivity reactions', they are not allergic in origin, but may be either due to high titres of antibody or a direct effect of the vaccine product.

The timing of systemic reactions will vary according to the characteristics of the vaccine received, the age of the recipient and the biological response to that vaccine.

The occurrence or severity of such local or systemic reactions does not contraindicate further doses of immunisation with the same vaccine or vaccines containing the same antigens.