The majority of animal bite wounds are treated by the individuals themselves. Only a minority are brought to medical attention.

A bite from a rabid animal is among the most feared, but in reality secondary infection rather than rabies is the most frequent consequence.

The most common biting animals are dogs followed by cats, horses and then rats.

Dog bites
Dog bites are the most common reported animal bites to humans. They account for 200,000 attendances at A&E in England and Wales.1

The bite can lead to a range of injuries, including scratches, deep open cuts, puncture wounds, crush injuries and tearing away of a body part. Children are more likely to be bitten; the head and neck area is the most common site of bites in children up to 10 years of age, probably because of a small child's height in relation to a dog.

The extremities, particularly the dominant hand, are the most frequent sites of injury for older children and adults.2

Cat bites
Cat bites are the second most common mammalian bite and account for 5-10 per cent of animal bites seen in A&E. Deep puncture wounds are of particular concern because cats have long, slender, sharp teeth.

The skin usually flaps over the bite, thereby sealing off the puncture wound, precluding open drainage and allowing an infection to develop.

Bacteria can get into the tissue that surrounds the bones or into a joint and result in osteomyelitis or septic arthritis.3

If infection occurs, it generally progresses rapidly, causing skin redness, swelling, and intense pain as soon as 12-24 hours after the bite. Cat bites are more liable to secondary infection than dog bites.

Rodent bites
Rats, predominantly pet rats, cause the majority of rodent bites. Most bites occur on the face or hands of children younger than five years of age. The resultant puncture wounds are usually not severe and infection rates are very low at about 2 per cent.4 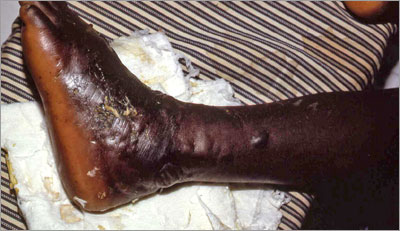 Human bites
Although this article is mainly concerned with animal bites, for completeness human bites are considered in brief.

The true incidence of human bites is unknown. However, if brought to medical attention care should be taken to not underestimate the potential seriousness of a human bite, particularly to the fingers, hand and scalp. Secondary infection and tendon damage are the main complications.

Whether antibiotics prevent infection after bites remains controversial.5 Currently, antibiotics are not given routinely, but they are almost always recommended for high-risk wounds (see box), such as deep punctures (particularly those inflicted by cats).

Primary closure with sutures is not recommended for non-facial bite wounds, especially deep punctures, bites to the hand and clinically infected wounds.

Infection risk
Pasteurella and bacteroides species are the most common pathogens involved in bites, and occur more frequently in cat bites.

Old bite wounds presenting more than 24 hours after the event are likely to be predominantly infected with staphylococci or anaerobes.

Occasionally, severe infections develop after bites as a result of haematogenous spread or undetected penetration of deeper tissues. It is important to enquire if the patient is immunocompromised, as patients with no spleen are particularly at risk of secondary infection with uncommon pathogens such as capnocytoplaga, which may result in severe sepsis.6

It is important to assess the risk of rabies for those bitten while travelling in rabies endemic countries.

It is estimated that one in 10 dogs in Bangkok are infected with rabies. The risk of infection following an exposure to a rabid animal is about 15 per cent, but it varies (from 0.1-60 per cent) depending on the exposure factors of the bite. These factors include the number of bites, the depth of the bites and the stage of illness in the infected animal.

The most effective mechanism of protection against rabies is to wash and flush the wound or point of contact with water and soap/detergent followed ideally by an application of ethanol or an aqueous solution of iodine.7

Snake bites
Snake bites are uncommon in the UK. There is only one indigenous venomous snake, Vipera berus or common adder, but many more are found in private collections and it is important to identify the biting species. Adder bites tend to occur in the summer months in people walking through areas of long grass and heathland.

Following an adder bite, pain will immediately be felt at the wound site and local swelling occurs. Management includes reassuring the patient, cleaning the bite site, splinting the limb and antitetanus as required.8

Changes to the GP contract for 2021/22 will be 'minimal' under a deal struck between...