The UK's collective waistband is widening by the year, but NHS care for serious and complicated obesity has failed to grow with it.

Figures obtained by GP from across the UK show huge variation in the provision of bariatric surgery.

More than half of primary care organisations (PCOs) are not following clinical guidance from either NICE or SIGN.

Instead, many are cutting spending by raising eligibility thresholds. Some require patients to have comorbidities where NICE guidance does not. Others require that patients have a BMI of at least 60 before surgery is even considered.

PCOs in some areas are funding more than 100 times more operations each year than others, while a third of areas do not have the specialist obesity services needed for preand post-operative care. 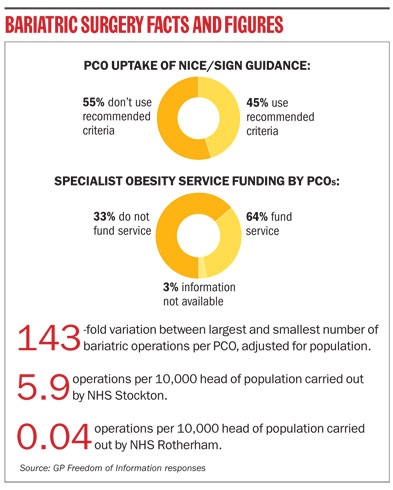 According to the Royal College of Surgeons, around a million people in the UK meet NICE criteria and 240,000 of these want to have surgery.

Yet only 4,300 NHS bariatric operations were carried out last year. Meanwhile, spending on obesity drugs continues to rise, with £43 million spent in England in 2009/10, an increase of 7 per cent on 2008/9.

Dr David Haslam, chairman of the National Obesity Forum (NOF) and member of Experts in Severe and Complex Obesity (ESCO), believes the stringent criteria not only exclude thousands of potential beneficiaries, but also ensure that 'those who least deserve surgery, get it'.

A young diabetes patient with a BMI of 35 may benefit more than someone with severe obesity, and yet is unlikely to receive treatment in many areas, he argues. 'It needs to be rationed but the wrong people are getting operations,' he says.

In response to such problems, the NOF is developing a template letter for GPs to send PCOs to convince them of the treatment's effectiveness, in cases where funding has been rejected.

In addition, the NHS Constitution now means patients have the right to receive treatment recommended by their doctor and NICE, and can challenge decisions themselves.

'There is concern that increasing controversy might put GPs off (referring),' he says, although he says he hopes it does not.

Dr John Dixon, once a GP in Australia and now a professor at Monash University in Melbourne, has written extensively about obesity treatment. 'There is no other (treatment) your GP refers for, and no chronic disease management, that is as effective as bariatric surgery,' he says.

Modern gastric banding in Australia has a mortality rate of just 0.05 per cent, he adds. 'GPs shouldn't be afraid of this (surgery) being dangerous - if they know this is as safe as a cholecystectomy, then they will have a better picture of its relative safety.'

As the NHS tries to make 'efficiency savings', indications are that budgets for 'non-essential' surgery may be tightly rationed.

Surgery costs are recouped in three years as obesity related costs are cut, he says. 'It's a worry, but the figures are so convincing this should not happen.'

Dr Dixon says commissioners need to anticipate the cost patients will place on the system if left untreated.

'Obesity is the root of so many other diseases that budgets for other services should be directed towards preventive care', he says.

'These are the debates the NHS should have,' he says.