The majority of cases presenting in primary care are due to a self-limiting viral infection. However, it is important to be able to quickly distinguish benign conditions from life-threatening.2 Missed bacterial infections in children can result in meningitis, sepsis, and death; therefore, early and accurate identification of serious bacterial infections is critical.3

Following the widespread use of immunisations against Streptococcus pneumoniae and Haemophilus influenzae type b, the epidemiology of bacterial infections causing fever has changed over recent years.4

Children over four weeks of age should have their temperature measured by electronic or chemical dot thermometers in the axilla or by an infra-red tympanic thermometer. Forehead clinical thermometers are no longer recommended.

Current NICE guidelines state that children with feverish illness should be assessed for the presence or absence of symptoms and signs that can be used to predict the risk of serious illness using the traffic light system. Children with any of the symptoms or signs in the red column should be recognised as being at high risk.1 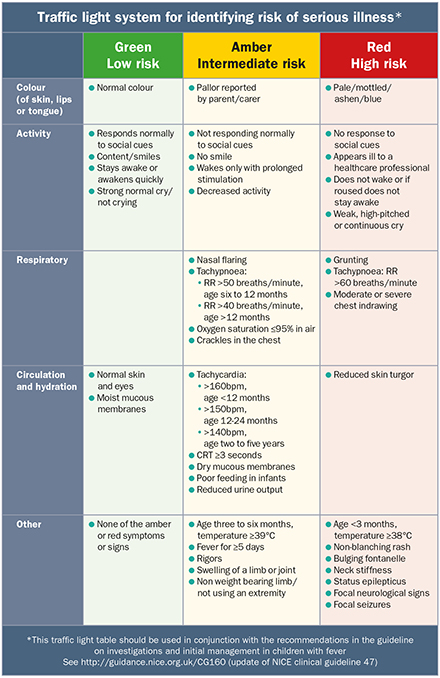 The following should be clearly recorded:

Although children under the age of three months with a temperature of at least 38°C are in a high-risk group for serious illness, in children over six months the severity of the temperature alone is not enough to identify those with a serious illness.

The Advanced Paediatric Life Support (APLS) criteria should be used to define tachycardia as follows:5

Any life-threatening features (e.g., airway compromise or reduced level of consciousness) should be identified promptly and the child admitted immediately for emergency medical care.

A thorough clinical examination should be undertaken to try to determine the underlying cause of the fever.

The following symptoms and signs suggest meningococcal disease in a child with a fever:

Signs and symptoms of bacterial meningitis may include:

Management of children with a fever

Paracetamol or ibuprofen can be given; however, they do not prevent febrile convulsions. It is no longer recommended that these medications should be given at the same time, they can be alternated if the distress persists or recurs though.1 There is some evidence that both alternating and combined antipyretic therapy may be more effective at reducing temperatures than monotherapy alone. However, the evidence for improvements in measures of child discomfort remains inconclusive.6

The actual management of a child with a fever should be according to their individual level of risk as determined by the traffic light system:

Antibiotics should not be given routinely. They should be given appropriately if an underlying cause of infection is determined, for example a urinary or chest infection. Children with symptoms and signs suggestive of pneumonia should be treated appropriately and do not need a chest X-ray routinely.7

Parenteral antibiotics should be given without delay to those children with suspected meningococcal disease (either benzylpenicillin or a third-generation cephalosporin).

Take the test to accompany this article on MIMS Learning

The government has raised the UK's COVID-19 alert level to four amid reports that...

COVID-19 infection rates will ‘soar’ and the NHS will ‘once again be crippled’ if...