A round-up of recent research of interest to GPs.

0.25 CPD Credits
Reflect on this article and add it to your CPD Organiser on MIMS Learning

Ischaemic stroke accounts for 85% of stroke incidents, with aspirin currently recommended for long-term secondary prevention.This study stresses the greater and previously underestimated short-term benefits of early aspirin administration after a TIA in reducing the risk of recurrent major stroke.

Study design
The researchers pooled the data of 15,778 study participants from 12 randomised trials of aspirin versus control in secondary prevention after ischaemic stroke or TIA. They assessed the effects of aspirin on recurrent stroke during the following time periods: less than six weeks, six to 12 weeks, and more than 12 weeks after randomisation.

Dipyridamole plus aspirin had no greater effect than aspirin alone in reducing recurrent stroke within 12 weeks. However, dipyridamole worked better after 12 weeks.

Implications for GPs
This study reinforces the view that aspirin is the key intervention in reducing the risk of early recurrent stroke after a TIA and highlights temporal differences in aspirin and dipyridamole effect. Targeting immediate self-administration of aspirin 300mg in those experiencing transient or mild focal neurological symptoms may save lives and avoid permanent disability, particularly if urgent medical help is unavailable.

The question of whether a haemorrhagic stroke (before brain imaging) is worsened by aspirin will need clarification, along with an update in national guidance. Nevertheless, patient education, to seek urgent medical help without delay, should be continued.

Key findings
The researchers identified 288,169 dental consultations occurring in UK general practice between 2004 and 2013. An antibiotic was prescribed in 57.1% of consultations.

Commonly prescribed antibiotics included penicillins (69.8%), metronidazole and tinidazole (18.1%), macrolides (8.7%) and cephalosporins (2.0%). They were more likely to be prescribed in December and on a Monday or a Friday. Significant predictors of antibiotic prescribing included the patient being middle-aged, male and with a record of previous consultations for tooth-related problems.

Implications for GPs
Dental presentations in general practice are complicated by patients’ concerns about access to, and the cost of, dental services, treatment phobia and an antibiotic-seeking culture.

Nevertheless, GPs should recognise their clinical competencies and be mindful that inappropriate antibiotic prescribing can lead to diagnostic delay, progression of cause, patient morbidity and potential antimicrobial resistance. Education that antibiotics do not treat dental pain is salient and supported by dental colleagues. Practices should work with their local dentists and pharmacists and signpost patients to NHS 111, which can supply details of local out-of-hours dental services.

Probiotics are consumed by healthy individuals worldwide. This is despite a poor understanding of their effect on human gut microbiota. This study provides a review of evidence that has compared supplements with inactive placebo in healthy adults.

Study design
This study was a systematic review of seven RCTs in peer-reviewed papers. Each study included 21-81 healthy participants between the ages of 19 and 88 years, who consumed probiotics containing Lactobacillus, Bifidobacterium or Bacillus provided in milk-based drinks, sachets, capsules or biscuits for 21-42 days.

Key findings
The authors concluded that there is no convincing evidence for any consistent effects of probiotics on faecal microbiota composition in healthy adults. This is in terms of the diversity or richness of the microbiota when compared with placebo.

Implications for GPs
Questions from patients about probiotic use are not uncommon in general practice. Clinicians should be aware that probiotics have a clinical use for disease-specific conditions, such as antibiotic-associated and Clostridium difficile diarrhoea, managing hepatic encephalopathy, irritable bowel disease, pouchitis and reducing the risk of necrotising enterocolitis in preterm neonates.

The need for larger, higher-quality research to actively address probiotic efficacy, optimal dosing, duration of use and physiological and immunological effects in healthy populations is overdue and pertinent to current trends in worldwide dietary habits.

Cardiovascular disease and migraine in women4

Migraine is three times more common in women than men, with a UK adult prevalence of 15%. Links between migraine and stroke already exist. Further evaluation of the association between migraine, cardiovascular disease and mortality is relevant and addressed in this research.

Study design
This prospective cohort study analysed data from 115,541 women enrolled in the Nurses’ Health Study II. The study participants were aged 25-42 years and free from angina and cardiovascular disease. A total of 17,531 (15.2%) women reported a physician’s diagnosis of migraine at baseline. The study participants were followed from 1989 to 2011 for cardiovascular events, diseases and mortality.

Key findings
During follow-up, 1,329 cardiovascular disease events occurred, leading to 223 deaths. In comparison with women without migraine and after confounding variable adjustment (for example, smoking, age, postmenopausal hormone therapy, hypertension and oral contraception), migraine was associated with a 39% higher risk of MI, a 62% higher risk of stroke and a 73% higher risk of heart surgery. Mortality from MI or stroke was increased by 37%.

Implications for GPs
This research is important at an individual and a population level. Clinicians may view migraine as a marker of future cardiovascular disease and therefore consider reassessment of their patient populations for reversible vascular risk factors.

How yoga could benefit patients with asthma5

Yoga is a globally practised discipline which is gaining much interest, owing to its proposed lifestyle benefits. Clinical trials evaluating the effects of yoga practice on asthma have so far been inconsistent. This Cochrane review aimed to assess the effect of yoga in patients with asthma. 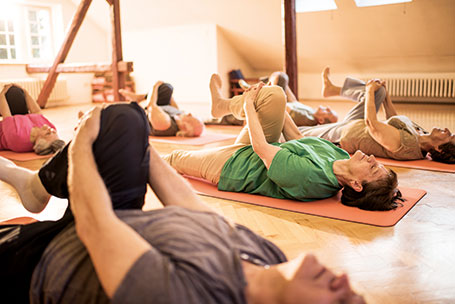 Study design
The Cochrane review assessed 15 RCTs that compared yoga with usual care, no intervention or a dummy intervention. Each study was conducted over a time period of two weeks to more than four years. Most of the study participants had a history of mild to moderate asthma ranging from six months to more than 23 years, and their yoga practice lasted from two weeks to 4.5 years.

Key findings
The authors found moderate-quality evidence that yoga probably leads to small improvements in quality of life and symptoms.However, effect on lung function, reduction in medicine use and any encountered side-effects remain uncertain, because only a few very small studies reported these outcomes.

Implications for GPs
Asthma prevalence is increasing, affecting 300m individuals worldwide. Although current management strategies aim to reduce clinical symptoms and improve quality of life, patients with asthma may avoid participating in physical exercise for fear of exacerbating their symptoms.

Yoga and the associated breathing techniques practised by its adherents may provide a simple and accessible method that GPs can incorporate into treatment plans for patients with asthma, with further potential holistic benefits of improved physical and mental wellbeing.

The government has raised the UK's COVID-19 alert level to four amid reports that...

COVID-19 infection rates will ‘soar’ and the NHS will ‘once again be crippled’ if...