Of every 1,000 adult patients on the average GP practice list, 260 will be drinking over the government's lower-risk alcohol guideline amount. By using materials developed for the primary care environment, GPs can play a key role in identifying those drinking at increasing and higher-risk levels and help them to reduce their alcohol consumption back to lower-risk. 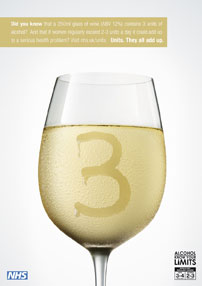 A national problem
There are between 15,000 and 22,000 premature deaths in England and Wales associated with alcohol misuse each year1 and alcohol costs the NHS £2.7 billion per annum.2

Public awareness
The government is trying to raise public awareness of the issue. Earlier this year, an advertising campaign was launched to encourage people to realise the number of units in popular drinks and understand the lower-risk drinking guidelines.

Billboard adverts showed that there can be three units of alcohol in a large (250ml) glass of wine - a fact that 77 per cent of adults were unaware of during the research process.3

The role of GPs
Many studies have shown that the process of identification of increasing and higher-risk drinkers and the provision of brief advice (IBA) is effective in reducing alcohol consumption to lower risk levels. This is also sometimes known as 'screening and brief intervention'.

The NNT is good at eight (compared with 20 for smoking cessation advice - which improves to 10 when nicotine replacement therapy is also offered).4,5

For patients who have a positive result from one of these tests, the remaining questions of AUDIT should be asked to help decide the next step, such as the delivery of brief advice or referral to specialist services.

A DoH online training module taking two hours to complete will be launched in November and hosted on the new DoH Alcohol Learning Centre website. Aimed at primary care practitioners, the module will outline IBA and the tools that can be used to deliver it.

These resources will support GP practices in fulfilling their obligation of delivering IBAs for newly registered patients under the directed enhanced services announced earlier this year.

Bringing IBAs into surgery
At my surgery in Tyneside, we have worked hard to increase the number of patients we screen for alcohol misuse. The team is trained to routinely ask screening questions in all our chronic disease management programmes - including the ones in which alcohol misuse seems less obvious, such as COPD.

GPs are also encouraged to 'think alcohol' with specific patient groups - such as contraception appointments or mental health diagnoses. I also try to take the opportunity to ask all young men about alcohol, because they come for appointments so infrequently.

In North Tyneside the project is now in its second year and we have run face-to-face training sessions in 15 practices, with each fielding 75 per cent of their clinical team.

1. DoH. Safe.Sensible.Social: The next steps in the National Alcohol Strategy, 2007.