Children present to their GP with a diverse array of skin disorders requiring urgent treatment.

A 2016 review of paediatric dermatology presentations to the Children’s Hospital of Philadelphia over a three-year period identified the urgent skin problems that presented most frequently.1,2

This article will discuss common urgent skin problems in children identified in the Philadelphia review, including infections, exacerbations of eczema and other inflammatory disorders. It should be noted that there are many other serious conditions that present with skin signs not covered in this article, including Kawasaki disease, meningococcal septicaemia, erythema multiforme and Henoch-Schönlein purpura.

Exanthems - generalised rashes associated with systemic symptoms such as fever, sore throat or headache - are most commonly caused by viral infections. This may be caused by an immune response to infection, direct damage by secreted toxins or direct damage to keratinocytes by the infectious organism. Diagnosis is usually clinical, but in atypical presentations, viral swabs of blister fluid or serology can be sent to confirm a diagnosis.3

Non-specific viral exanthems are the most common rashes seen in primary care. Blanching erythematous macules or papules present in a diffuse distribution. Associated symptoms are usually non-specific and tend to resolve within a week; most viruses require supportive care only. Causes include non-polio enteroviruses and respiratory viruses. Parvovirus B19 (slapped cheek syndrome) is commonly seen and can result in a bright erythema of the cheeks and a lacy eruption on the chest.4 Table 1 outlines classic childhood rashes, including common viral exanthems.

Gianotti-Crosti syndrome (papular acrodermatitis of childhood) is an atypical presentation associated with viral illness. There is an acute eruption of deep red papules on the legs, buttocks and sometimes the face, often in an asymmetrical distribution. Gianotti-Crosti syndrome usually affects children aged 1–3 years and is self-limiting.

Staphylococcus aureus causes most bacterial skin infections in children. Staphylococcal scalded skin syndrome (SSSS) is a rare exfoliative dermatitis caused by certain strains of S aureus which produce exfoliative toxins that prevent keratinocyte cell-cell adhesion. Patients with SSSS will have a positive Nikolsky sign — progression of blister cleavage induced by lateral pressure applied to the skin. Children may develop SSSS more readily than adults either because they have yet to form antibodies against the exfoliative toxins, or because their kidneys are unable to excrete the toxins.

SSSS usually begins with localised infection, for example of the conjunctivae or nostrils. Radial fissures around the mouth are a characteristic sign, caused by separation of perioral crusts. The high level of exfoliative toxin produces diffuse, tender erythematous patches on the skin which develop into flaccid bullae, with a fever. The diagnosis is confirmed by isolation of S aureus. Rapid treatment is required with hospitalisation, fluids and IV antibiotics.5

Scabies should be considered in patients presenting with a new itchy rash. Scabies may also exacerbate eczema in children. Children under six months old require a medical review and prescription for treatment. NICE advises that children under two months are reviewed by a paediatric dermatologist before treatment is prescribed.7

Table adapted from Allmon A et al8 with permission. Click the table to view a larger version.

Around 20% of children have eczema.9,10 Most acute presentations of eczema will be associated with infection. Children with eczema have an impaired epidermal barrier and an altered skin microbiome that results in the skin becoming colonised with S aureus.

Superinfection with S aureus is very common and presents with increased erythema, oozing or weeping skin and a visible honey crust. The location of eczema varies according to the age of the child; infants are more likely to have facial involvement and older children tend to have eczema on flexures and limbs. Sometimes children will be systemically unwell with a fever.10

Eczema herpeticum should be considered in any child with an eczema exacerbation who is unwell with fever or lethargy and complaining of painful skin. Eczema herpeticum typically presents with small punched out erosions or vesicles but may be more difficult to diagnose on the background of an acute bacterial infection. If in doubt, viral swabs should be sent urgently and treatment started while results are pending.

NICE advises that suspected eczema herpeticum in a child with atopic eczema should be treated immediately with systemic aciclovir and the child should be referred for same-day specialist dermatological advice. If secondary bacterial infection is also suspected, treatment with appropriate systemic antibiotics should be started.11

Acute presentations of eczema in children may be caused, in part, by a failure in routine eczema management. An acute exacerbation should be seen as an opportunity to briefly review regular eczema care with the family.

A useful review article on eczema management for GPs was published in 2016.9 The authors recommend reinforcing general measures including taking short, tepid showers or baths, and using soap substitutes. All children with eczema require emollients applied regularly (250–500g every week). Although many parents prefer creams (which contain water with an oil component), ointments (oil mixed with water) usually provide a more effective barrier and should be preferentially prescribed. There are many short videos parents can watch on YouTube on how to apply emollients. See for example:

More specific strategies may include the introduction of (diluted) bleach baths in children with frequent infective exacerbations or the use of a steroid-sparing topical calcineurin inhibitor such as pimecrolimus or tacrolimus. Topical calcineurin inhibitors are licensed in the management of atopic dermatitis in children over the age of two years, particularly in delicate areas such as the face and flexural sites.

Urticaria is a common presentation in children, and wheals may be associated with a viral infection. Recommended first-line treatment is with a modern second-generation antihistamine. Cetirizine, desloratadine, fexofenadine, levocetirizine, and loratadine have all been studied in children, and their long-term safety is well established in the paediatric population.12

If there is a history of an acute generalised urticaria in a child following exposure to specific foods (such as milk, egg, or peanut), guidelines recommend investigation for sensitisation to foods suggested by the history, to confirm their specific food trigger to prevent subsequent anaphylaxis.12

Acute haemorrhagic oedema of infancy is a rare type of small vessel vasculitis that is usually associated with a viral infection. It presents with oedema, purpura and fever, usually in children under two years. It may be confused with meningococcal septicaemia.13 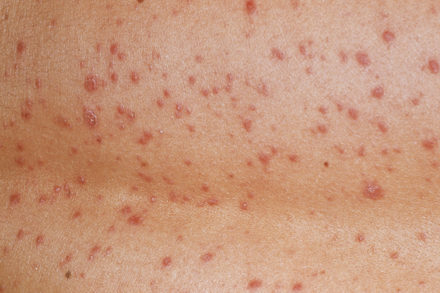 Severe adverse cutaneous reactions in children are rare.15 Stevens-Johnson syndrome/toxic epidermal necrolysis (SJS/TEN) are serious and require urgent hospital admission. TEN often starts with non-specific viral symptoms, then high fever, followed by skin peeling and mucosal blisters. Eye infection or inflammation is present in one third of patients. Classification is based on body surface area (BSA) affected, with SJS involving less than 10%, SJS-TEN 10% to 30%, and TEN greater than 30% of BSA.16 An SJS/TEN presentation can result from viral infections or a combination of infection and drugs (infection is more commonly implicated in SJS/TEN in children than in adults).

Infantile haemangioma (IH) accounted for 3% of paediatric dermatology presentations to the emergency department in the Philadelphia study.1 In the last decade, the focus has moved from a position of benign neglect to active treatment of appropriate cases with topical timolol, oral propranolol, laser therapy or surgery.17

Patients should be referred to a dermatologist if the IH requires:17

A quarter of all infantile haemangiomas will develop a complication at some stage which may necessitate urgent management and referral. Complications can include ulceration, bleeding, feeding impairment (for example, IH close to the mouth in a breastfed baby) or visual impairment.17